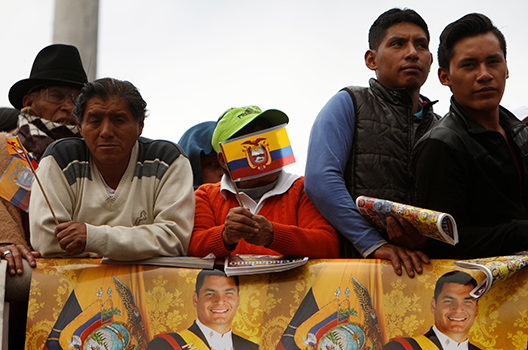 \After ten years of left-wing populism, Ecuador, the smallest of the Andean nations, could witness a drastic political shift. Upcoming sectional elections may provide a foretaste of a victory for the political right in the 2021 presidential and legislative elections.

On March 24, Ecuadorians will elect representatives to occupy more than 11,000 governmental positions, from the lowest municipal posts to the highest tiers of provincial representation.

Unlike past sectional elections, which had little relevance beyond domestic administrative affairs, the 2019 elections could provide an accurate picture of changing political tendencies in the immediate aftermath of the nation’s failed 21st Century Socialist experiment. Such is the hunger for political change that by the time registrations closed in late December of 2018, 279 political organizations nominated 80,281 candidates. Compared to the 27,825 candidates from 121 organizations that registered for the 2014 electoral period, these numbers represent an uptick of activity from both existing and newly formed political movements. This turnout makes Ecuador the country with the largest number of political movements in South America, followed by Peru and Bolivia.

Furthermore, whereas out of the twelve main political movements that fielded candidates in the 2014 sectional elections only four were right-wing, this year more than half of the twenty-three frontrunner movements are right-wing.

Though statistics alone do not guarantee the right gaining a substantial portion of political power, the circumstances that surround the elections make it highly probable. Both the withering of Correismo-the leftist ideology and policies of former President Rafael Correa and his followers- from Ecuadorian institutions and popular discontent with the economy have empowered movements and actors like banker Guillermo Lasso’s CREO party and the Social Christian Party’s Jaime Nebot.

Ecuadorian President Lenin Moreno’s platform of National Dialogue—an attempt to reconcile polarized socioeconomic and political factions—opened the doors for the private sector and other formerly constrained right-wing segments of society to have a growing influence in state policy. Moreno’s introduction of an economic plan that strived for the contraction of the state and tax incentives for the business sector is the best example of the growing influence of the right.

If the right wins a majority of regional government positions this March what would Ecuadorian politics look like if this result is reflected in the presidential and parliamentary elections in 2021?

The right in Ecuador will most certainly emulate the examples of Argentina, Colombia, and Chile by liberalizing the market, privatizing unproductive sectors while reducing state spending, and seeking tighter relations with the international market and financial institutions to solve the nation’s fiscal deficit that is worth billions of dollars. Nevertheless, due to the history of Ecuadorian politics, candidates will most likely refrain from touching subsidies that benefit the middle and lower classes—Moreno’s government swindling gas subsidies caused public trust in the government to drop below 35 percent and growing unrest.

The risk of Ecuador swinging to right-wing populism is low. Unrestrained liberalization of the economy remains a taboo topic as it brings back memories of the 1990s’ banking and dollarization crisis. A decade of Correismo has Ecuadorians already saturated with the populist rhetoric. Democratically-driven candidates who prize gradual reform, rather than extremism, will be the most likely victors.

The rise of the right would represent a significant break in Ecuador’s left-wing policy toward the rest of Latin America. Right-wing candidates would continue the path set forth by Moreno’s government and strengthen economic and diplomatic ties with Washington while also distancing Ecuador from Venezuela, Nicaragua, and Cuba. Still, based on the growing animosity between Quito and Caracas, the government should be expected to have a more proactive stance in isolating Venezuela, formerly an important regional ally, severing relations and even joining the Lima Group, which seeks to end the current crisis in Venezuela.

Ecuador’s departure from its Socialist-oriented diplomatic doctrine would increase regional opportunities for investment in the country, most likely in stagnant energy projects like its five idle hydroelectric plants. Furthermore, we can expect a right-wing government to pursue any policy and constitutional adjustments necessary in an attempt to revert the country’s negative investment reputation and revitalize a declining economy.

However, there is one major aspect that will most certainly be a point of conflict for a right-wing government: China’s economic presence. Ecuador’s heavy reliance on Chinese financing will surely divide those on the right who see the economic value of easy cash-grabs and the potential of Chinese state and private investment, from those who see Ecuador’s billions in debt obligations as an unsustainable long-term burden.

It is still early to cast a decisive verdict on the outcome of the sectional elections and their implications for Ecuador’s future. However, the current socioeconomic and political conditions pave the path for a government that, even if centrist, will be forced to open itself to the market and a changing regional order.

Santiago J. Herdoiza is an intern at the Atlantic Council’s Adrienne Arsht Latin America Center. Follow him on Twitter @herdoiza_j.

Image: People gather outside the National Assembly during the inauguration ceremony of President-elect Lenin Moreno (not pictured) in Quito, Ecuador May 24, 2017. (REUTERS/Daniel Tapia)