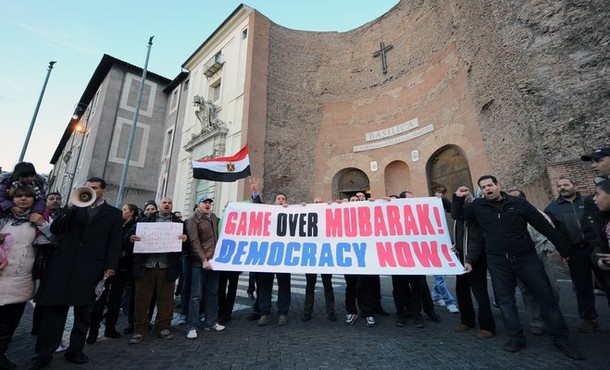 A group of academics have issued an open letter to President Obama calling on him to "approach Egypt through a framework of shared values and hopes, not the prism of geostrategy."

It is also clear to us that if you seek, as you said Friday "political, social, and economic reforms that meet the aspirations of the Egyptian people," your administration should publicly acknowledge those reforms will not be advanced by Mubarak or any of his adjutants.

There is another lesson from this crisis, a lesson not for the Egyptian government but for our own. In order for the United States to stand with the Egyptian people it must approach Egypt through a framework of shared values and hopes, not the prism of geostrategy. On Friday you rightly said that "suppressing ideas never succeeds in making them go away." For that reason we urge your administration to seize this chance, turn away from the policies that brought us here, and embark on a new course toward peace, democracy and prosperity for the people of the Middle East. And we call on you to undertake a comprehensive review of US foreign policy on the major grievances voiced by the democratic opposition in Egypt and all other societies of the region.

The bolded sentence (emphasis mine) suggests a dichotomy that does not exist.  The United States must, like any nation, conduct its foreign policy on the basis of its interests.  When dealing with an important regional player like Egypt, it must also consider the ramifications of its decisions in terms of how they will impact neighboring countries and wider policy goals. But values are part and parcel of determining what one’s interests are and promoting common values is itself an interest.

Despite its lack of meaningful elections and repression of dissidents, Egypt’s government is among the most progressive in the region.  That’s of course a low bar.  But it’s a secular society with more freedom than most in the Arab world.

At the same time, Egypt is not only America’s longest-standing ally in the region aside from Israel, but it has played a key moderating role not only on the Arab-Israeli issue but on a host of others vital to Western interests.   While the administration would of course prefer to see more moderation and closer adherence to Western values, there’s not exactly a rush to replace a known ally with an unknown successor.

So, no, the administration hasn’t called for Mubarak to step down.  But it has called "real democracy" in Egypt.  Speaking on ABC’s "This Week" yesterday, Secretary of State Hillary Clinton declared, "Real stability only comes from the kind of democratic participation that allows people to feel that they are being heard."  On NBC’s "Meet the Press," she added, "We want to see free and fair elections and we expect that that will be one of the outcomes of what is going on in Egypt right now."

She rightly noted, "It is not a question of who retains power -that should not be the issue."  Realistically, the 82-year-old Mubarak isn’t going to install "real democracy."  Even if he were so inclined and can maintain power long enough to set up "free and fair elections," it’s a virtual certainty that he wouldn’t emerge as the winner.  But it’s not the place of the United States to dictate who will govern in other countries, at least not those who have not attacked us and aren’t in violation of UN Security Council resolutions.

The Obama administration is reportedly preparing behind the scenes for a post-Mubarak era. But it doesn’t have the luxury of cheerleading for democracy while ignoring Western and regional interests in a key state.