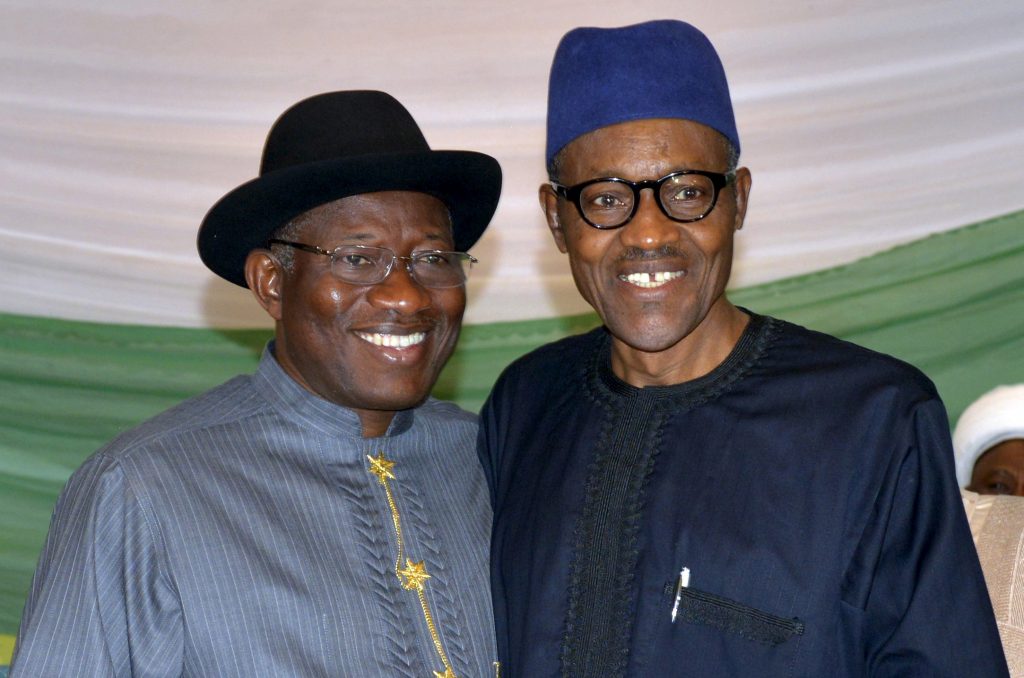 The absence of a clear winner in Nigeria’s presidential elections could deal another blow to the country’s economy, which is already reeling from falling crude oil prices, says Atlantic Council analyst Aubrey Hruby.

Nigerians will vote in presidential and national assembly elections March 28. The contest between the top two candidates—President Goodluck Jonathan and Muhammadu Buhari, a retired Major General who ruled Nigeria from 1983 to 1985—is likely to be Nigeria’s closest ever since military rule in Africa’s top oil producing-nation ended in 1999.

“The problem with the economic trends we’re seeing—the downward trajectory of the naira [Nigeria’s currency] and the oil prices—is that, if combined with prolonged election uncertainty, it will certainly produce a negative impact on investment trends,” Hruby, a Visiting Fellow at the Atlantic Council’s Africa Center, told the New Atlanticist.

“The biggest fear is that there will be a contested election that could be accompanied by violence,” she added.

Nigeria has a history of violent elections. In 2011, Jonathan’s defeat of Buhari was followed by three days of rioting that killed more than 800 people and displaced 65,000.

Eleven of the fourteen presidential candidates, including Jonathan and Buhari, have signed the Abuja Accord, which commits them to refraining from violence during and after the election. The two frontrunners also released a statement March 26 pledging to respect the election outcome.

Nevertheless, the prospect of post-election violence is a very real concern.

Nigeria’s Independent National Electoral Commission (INEC) postponed an election originally set for February 14 amid a campaign of suicide bombings by Boko Haram terrorists, and because millions of voters had not received their permanent voter cards.

Nigerian security forces have since ramped up a military campaign against Boko Haram and driven the militants out of their strongholds in three northeastern states— Borno, Yobe, and Adamawa. Nigeria’s military claimed March 26 to have destroyed Boko Haram’s headquarters.

Close to a million Nigerians have been displaced as Boko Haram has sought to expand its control through a campaign of terror that has included suicide bombings and mass kidnappings. The large number of displaced Nigerians poses a challenge to the government, particularly if these people are unable to vote in a close election.

Governorship and state assembly elections will be held April 11.

Hruby spoke in a phone interview with the New Atlanticist’s Ashish Kumar Sen. Excerpts below:

Q: While security issues, the Boko Haram insurgency specifically, have dominated the headlines in particular, Nigeria’s economy has been hit by falling crude oil prices. How big a factor is the economy in this election?

Hruby: It certainly is a factor. Nigeria is still heavily dependent on oil and the fact that the price of oil has fallen to $50 a barrel has hurt it enormously. Nigeria is at one of the lowest levels of reserves in recent history. The government has spent a lot of money trying to support the naira from a spiraling devaluation; the Central Bank of Nigeria has just stopped supporting the naira because it was costing them $100 million a day to just prop it up; and the naira has fallen something like 20 to 25 percent over the last six months in response to tumbling oil prices.

Q: What is Jonathan and Buhari’s plan to fix the economy?

Hruby: Neither candidate has a very strong, differentiated economic plan. They point to their political differences and a lot of it has to do with security and corruption, and less about how they would handle the economy.

Both Jonathan and Buhari have talked about the economy in general terms. Buhari has been focused on what he sees as cleaning up the country, dealing with corruption, and closing loopholes. His party feels that by tackling corruption and implementing reforms in the oil sector the government will be able to generate more money through efficiency and transparency. Buhari has been focused on this idea that there will be more overall revenue as a result of his ability to clean house.

Jonathan’s team has been focused on general discussions on economic diversification and assuring voters that it will still maintain strong fiscal management. It is clear, because they are the incumbents, what the economic team would look like in another Goodluck Jonathan administration. The composition of Buhari’s future economic team is not as clear.

Q: What would a poor election outcome mean for business and investment trends in Nigeria?

Hruby: Nigeria has been suffering from insecurity for the last few years. The Boko Haram issue has been growing, but despite that,you have seen so much investment in Nigeria in 2014. It was a banner year for private equity in Africa in general. Something like $8 billion was raised, which matches the high levels we saw in 2007. A lot of that money was raised for funds that want to target Nigeria. Many investments were made in Nigeria.

The reason for the higher investment was that the security problems were concentrated in three states in the north and left people operating in the commercial centers in the south fairly undisturbed.

The problem with the economic trends we’re seeing—the downward trajectory of the naira and the oil prices—is that if combined with prolonged and violent election uncertainty it will certainly produce a negative impact on investment trends.

The IMF just reduced its projection of Nigerian growth to below 5 percent, so Nigeria will still grow in 2015 but not at the rate we’ve seen in prior years.

The biggest fear is that there will be a contested election. If either side loses by a very close margin they are going to contest it. The question is how that contesting will manifest. Will it only be a matter for the courts or will people take to the streets? And if they take to the streets will it only be sporadic urban protests or will it be a more violent campaign and will we see the sectarian backlash that we have seen in years before? It’s not good for Nigeria to have a sustained period of uncertainty and violence around this election.

Q: What has been the impact on Nigeria’s economy of the decline in crude oil prices and the US decision to end crude imports from Nigeria?

Hruby: The most immediate is the price impact. Because Nigerian crude is traded on the spot market others can pick up the purchases that the United States has left behind. So getting other customers has not been a problem as much as the drop by 50 percent in oil prices. That is huge because it impacts the country’s budget, which is always based on an oil price projection. Nigerian reserves and rainy day funds get slashed in times of low oil prices. You’ve got to make some cuts and decide what kinds of programs you will choose to cut.

Whoever wins this election will certainly face a major gap in funding. The new administration will have to decide what to do about that; where to cut investments, is it going to be in public programs and in what areas of the country? Nigeria suffers from a high level of geographic inequality. Are services going to be reduced equally across states or will some states manage their budgets better than others? Because it is a federal country you will certainly see an incredible variation in the impact.

Q: What kinds of programs have been sacrificed?

Hruby: I don’t think we can point to any one right now. What they have been doing is drawing down on their reserves and rainy day fund. However, going forward, sustained low oil prices will mean Nigeria will have to make some significant tradeoffs in the coming year because they are going to have a fiscal shortfall.

That really impacts the winner of the election. Whoever inherits the economy has some significant challenges on their hands. Both Jonathan and Buhari say they want to diversify the economy etc., but skeptics are looking to find the real concrete ideas, and it’s difficult to see any real breakthrough economic policy proposals in this election period.

Q: What should be the next government’s priorities when it comes to fixing the economy?

Hruby: They have to get the power sector right. Many think that if the power sector was sorted out and there was a more abundant, regular, and cheap power in the country that you would see growth rates of up to 4 percent higher than what they are today.

The next government should firstly continue the privatization process in power ensuring that there is regulatory certainty around it, and continue to make for a strong investment environment in the sector. And secondly, prioritize economic diversification. But diversification is built on the back of cheaper power and infrastructure. It will be interesting to see what happens because a lot of the power sector reforms and infrastructure investment are obviously going to be impacted by a smaller budget.

There is not a lot of debate about what Nigeria needs to do in the long run. The question is who can do it best. What may help is if there is a better security situation as a result of this election. Some hypothesize that if Buhari were to win, Boko Haram were to settle down, and Nigeria were to have a stronger security apparatus, a lower naira could mean that a lot of companies could come in and invest because it is a good time to buy cheap. But not a lot of companies have the risk tolerance to buy cheap into a place where there is a lot of political uncertainty.

Q: Do either candidate have a plan to tackle rampant corruption?

Hruby: It is easier to attack an incumbent on corruption as an opposition leader and say you’re going to clean up Abuja just the same way as every presidential candidate in the United States says they’re going to come and clean up Washington.

The opposition candidate essentially wants to clean up the governing structures. You can run on a platform of being tough on corruption and that is very well received in Nigeria. They all say that they are doing things to address corruption. I guess we will have to wait and see.

Image: Nigerian President Goodluck Jonathan (left) and his main challenger Muhammadu Buhari pledged in Abuja March 26 to respect the outcome of March 28 election. In January, they signed an accord promising to prevent violence during or after the hotly the contested elections. (Reuters)