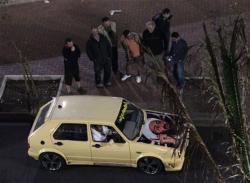 The "Veterans Today" Network, a one-man show on the Internet created and run by Gordon Duff, a 100 percent disabled Marine Vietnam veteran, states flatly that 9/11 was a CIA/Mossad conspiracy and that Osama bin Laden wasn’t involved and died in 2001.

This can easily be dismissed as yet another example of deliberately disseminated disinformation riddled with intentionally false or inaccurate data designed to confuse the adversary. But some key intelligence officials are taking bin Laden’s reported demise seriously.

CIA Director Leon Panetta said in early July that the intelligence agency hadn’t been able to positively confirm any specific information on the uber-terrorist since "late 2001." And all those audio and video tapes broadcast by the Qatar-based al-Jazeera global television network? Clever Israeli forgeries, says Duff.

Many other voices in cyberspace claim the bin Laden myth is kept "alive" to justify the Afghan war and the global war on terror.

Angelo Codevilla, who teaches international relations at Boston University, is a former U.S. intelligence officer who studied Soviet disinformation techniques during the Cold War. He says a close examination of all the alleged bin Laden tapes, including the videos, have convinced him that Elvis Presley is more alive than Osama bin Laden.

By all accounts from those who knew him prior to 9/11, bin Laden was a deeply religious man and his early tapes after 9/11 were sprinkled with references to God and the Prophet Muhammad. Not so the later ones, which were subsequently analyzed by some experts who said they were professional forgeries.

The last time credible intercepts of bin Laden’s voice were made by overhead satellites in early December 2001 as he was escaping through the Tora Bora mountain range from Afghanistan to the sanctuary of Pakistan’s tribal areas.

The late Ajmal Khattak, the head of the Khattak tribe, who had half a million followers in the region, advised this reporter and his Pakistani assistant Ammar Turabi, and our multilingual security, to rent horses and proceed to an exit from Tora Bora in the Tirah Valley. We got there Dec. 11. Local villagers told us bin Laden and some 50 fighters had emerged Dec. 9 and were met by a convoy of utility vehicles that sped off in the direction Peshawar.

U.S. Secretary of State Hillary Clinton evidently had more recent intelligence on her last visit to Pakistan July 21. She said she believes "elements" of the Pakistani government know bin Laden’s whereabouts. Those with the knowledge, she added, are in the "bowels" of the bureaucracy, not the "top levels of government." She was clearly referring to some members of Pakistan’s Inter-Services Intelligence agency.

Former ISI chief Gen. Hamid Gull is a personal friend of both bin Laden and Mullah Omar, the Taliban leader, and bin Laden’s no. 2, the Egyptian doctor Adman al-Zawahiri. Gul is an advocate of Pakistan’s politico-religious extremists and self-declared enemy of the United States.

There are "retired" ISI officers who still see bin Laden as a hero of the joint campaign against the Soviet occupation of Afghanistan in the 1980s. Gul and his followers are also working to hasten an end to the U.S. presence in Pakistan and Afghanistan.

For the now growing number who believes bin Laden is dead, there is only one valid message from bin Laden. It was his open letter to the "Pakistani people," on al-Jazeera, dated Sept. 24, 2001, 13 days after 9/11, in which he said:

— "I have already stated that I was not involved in the 11 September attacks in the United States.

— "Neither had I any knowledge of these attacks nor do I consider the killing of innocent women and children and other humans, as an appreciable act … Islam strictly forbids causing harm to innocent … people. Such a practice is forbidden even in the course of a battle.

— "All that is going in Palestine … is sufficient to call the wrath of God upon the United States and Israel."

Those who believe Osama Bin Laden is alive, and guilty of killing almost 3,000, quote his 2004 talk in which he said he thought of attacking U.S. skyscrapers when he saw Israeli aircraft bombing tower blocks in Lebanon in 1982.

"God knows that it had not occurred to our mind to attack the twin towers," he said then, "but after our patience ran out and we saw the injustice and inflexibility of the American-Israeli alliance toward our people in Palestine and Lebanon, this came to my mind."

While Duff is mostly guff for those whose job is to keep tabs on all the twists and turns since 9/11, there is also the post 9/11 generation that doesn’t read newspapers or weekly magazines and gets its news fix online. The conspiracy theory coupled with disinformation from all sides makes for more interesting reading. It also gives youngsters a leg up on their "naive" elders.

Bin Laden was suffering from a kidney ailment and some experts say he died Dec. 13, four days after his escape from Tora Bora. Videos since then, neutral experts say, show bin Laden writing with his right hand but he is well known as left-handed. They also detected differences in the shape of the nose, skin color and speech.

Duff does commentary on his conspiracy theories for radio and TV news programs; his provocative articles are carried the world over and his Web site gets 22 million page hits a month. Some of his recent "Top 10 Stories of the Week": "The CIA: Beyond Redemption and Should Be Terminated"; "Does Event Honoring Israeli Spy Suggest Another Israeli Operation?"; "Wikipedia Revisionism to Israeli Pressure Groups."

Duff’s "Corporate Profile" says, "We are a full service Network of 63 Web sites that service the U.S. Military Veterans’ Community," which claims "over 310,000 plus unique visitors per month" and recently grew 39 percent in one month.

Arnaud de Borchgrave, a member of the Atlantic Council, is a senior fellow at CSIS and Editor-at-Large at UPI. This article was syndicated by UPI. Photo credit: AP Photo.