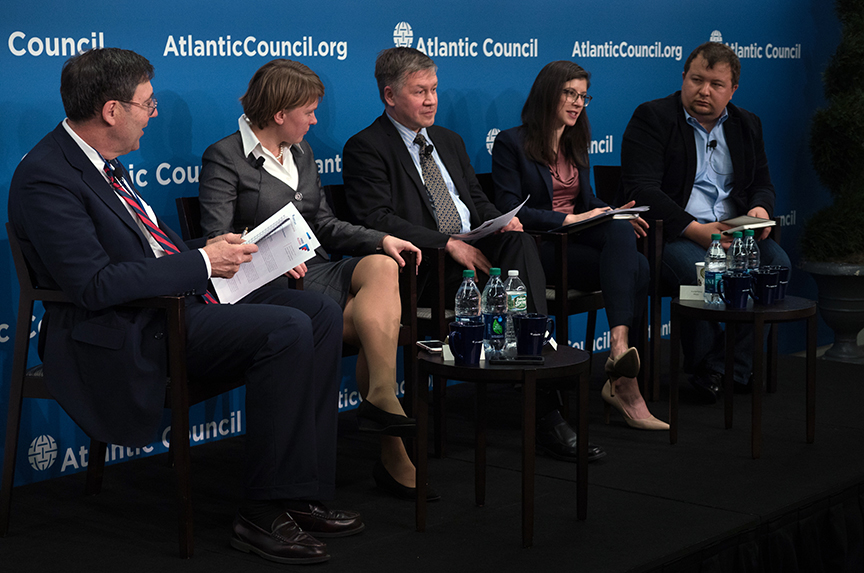 The rapidly climbing numbers of Russians fleeing the country in search of political freedom and economic opportunity in the West has become the greatest threat to the stability of the Russian Federation, said an Atlantic Council analyst.

According to Alina Polyakova, director of research for Europe and Eurasia at the Atlantic Council, “the fact that you have this outward migration is a significant national security threat to the Russian Federation.” She said: “this is the number one threat to a Russian Federation that seeks to gain its foothold in the world again.”

Russian President Vladimir Putin’s leadership ushered in an era where a revanchist Russia has clamped down on social freedoms at home in order to exert its aggression and influence on the global stage. However, these efforts may be impacted by instability at home. Between 2000 and 2014, approximately 1.8 million Russians left the country “under [Putin’s] watch,” said Polyakova, citing official numbers from the Russian Federation. “This trend has only intensified,” she added.

Harsh repression of civil society, sparse economic opportunity, and the lack of an independent media have contributed to this exodus. “The very individuals who should be staying in Russia… to make it a great power in the economic sense, those are the individuals who are abandoning their country,” said Polyakova.

Ultimately, the question of migration is a specific issue, “which gives us insight to a larger issue in Russia,” according to John E. Herbst, director of the Dinu Patriciu Eurasia Center.

Polyakova joined Evgenia Chirikova, a Russian environmentalist; Sergei Erofeev, consultant at Rutgers University; and Mikhail Kokorich, president and co-founder of Astro Digital, Inc., to discuss the scale and significance of the ongoing wave of migration from Russia. Herbst moderated the conversation, which took place on March 7.

Meanwhile, according to Erofeev, “the loss of quality of human capital in Russia is still going on.”

Erofeev emphasized the need to differentiate between the reasons driving Russians to leave the country, claiming “this so-called wave is the most complex in terms of its composition.” According to Herbst, the issue of emigration is both a political and economic problem.

Chirikova described the political motivations driving many activists and individuals engaged in civil society to flee Russia, claiming that due to aggressive repression, emigration became necessary to ensure their safety. In particular, the campaign against Putin’s re-election in 2012 ignited an activist outcry and political backlash.

The crackdown in 2012 was marked by not only political repression, but economic hindrances as well, leading to the alternative cause of Russian emigration. Under Putin, “the creative class started to revolt internally,” and “it became clear that you can’t continue in the context of growing corruption,” said Erofeev. As a result, many Russian entrepreneurs left the country in order to realize their business aspirations in the United States, or other Western countries.

However, “entrepreneurs can work in any political system,” according to Kokorich, himself a Russian entrepreneur.  He said it would be too simplistic to deem migration a purely political issue. He described how the assessment of political risk goes hand in hand with an individual’s consideration of economic return. While “we definitely feel the overall deterioration of the situation,” he said, the political situation is an “additional motivation.”

Ultimately, entrepreneurs are leaving Russia “because they have no economic opportunity to use their skills,” said Polyakova.

Erofeev described how the wave of Russian emigrants who left between the late 1990s and the early 2000s, up to the present day, “are probably the last flash of highly educated people” leaving Russia. Due to the degradation of the Russian education system, “you are not going to experience any kind of similar immigration influx from Russia in the future,” he said.

Considering the intertwined nature of factors pushing Russians to emigrate, Polyakova said that the root of the problem may be a renegotiation of the social contract when Putin took control. When he assumed power, Putin reneged on certain freedoms in order to rebuild Russia’s economy in the wake of the Soviet era. According to Polyakova, that social contract no longer works for the people who can help rebuild the economy.

“Whatever stability the regime is able to provide… it’s failing to keep the people who should be driving the economy forward, and I think this is the profound problem with the regime,” she said.

However, while Polyakova described the skyrocketing numbers of Russian emigrants as “troubling,” Chirikova and Kokorich said there are also benefits to a Russian diaspora in the West.

“Political activists and politicians who need to leave… are people who really want to support Russia and continue the struggle,” said Chirikova, adding, “they really want to change the regime in Russia.” She described how Russian civil society members who have fled oppression continue their work from abroad, arguably more effectively, by leveraging the freedoms of Western society not available to them in Russia.

She called on Western states to help Russian activists and members of civil society continue their work. “A huge problem in Russia is that we don’t have independent media,” said Chirikova, claiming emigrants need the help of Western civil society to give them a voice. “It’s very important if you help us disseminate information,” she said. Chirikova also called on Western countries, in particular the United States, to maintain political pressure on Russia.

Further, the decision of many emigrants to move their business activity outside of Russia is “an extremely good sign for current Russia and for future Russia, and for civil society in Russia,” said Kokorich. He described how Russian-speakers emigrate to Western countries, and many establish large technology companies, employing thousands of Russian citizens.

As a result, Russian emigrants establish strong ties with those who remain in the country, thereby maintaining open channels of communication between Russia and the West, according to Kokorich. The success of Russians abroad “shows that life is different from what is seen on state TV,” he said.

This kind of connection is “a source of potential growth for Russian economic future,” Kokorich said. It is also significant for the fact that this economic activity has not been affected by the tense relations between the White House and the Kremlin in the past, according to Herbst.

While Russian-speakers abroad thrive on their political and economic freedom, ultimately, this wave of emigration differs from that which occurred during the era of the Soviet Union because now, “those who leave Russia don’t leave it forever,” said Erofeev. Chirikova added, “we have a chance to return in case of stagnation of the Putin regime and help our motherland to change this horrible situation.”