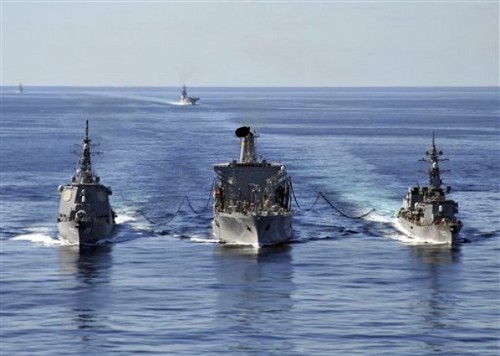 The United States suffers from a kind of "sea blindness" — an inability to appreciate the central role the oceans and naval power have played in securing our strategic security and economic prosperity. One symptom of this bipartisan malady has been that the country is failing to take an active role in shaping the world order of the oceans to promote our national interest.

This sea blindness is manifest in a number of policy choices, including the Pentagon’s fiscal struggle to fund a powerful naval fleet and a national oceans policy that has virtually ignored the importance of sea power. Perhaps most troublesome is that the United States has abandoned its best opportunity to shape the political ordering of the oceans by failing to ratify the 1982 Law of the Sea Convention.

From 1973 to 1982, the United States, working with the other major maritime powers, led negotiation of the Law of the Sea Convention. The nation was successful in securing the right of American submarines to transit throughout the world’s numerous international straits without surfacing; the right to conduct air, surface and subsurface naval activities and intelligence missions anywhere in the oceans beyond a narrow 12-nautical-mile territorial sea; and the right to innocent passage inside the territorial seas of other states.

These provisions are absolutely essential for American security, so it is troubling that the country is not a party to the convention. The treaty has suffered from the bad reputations of so many other multilateral agreements, such as the Kyoto Protocol, and has been maligned by some conservatives because the convention was negotiated under the auspices of the United Nations. Such concerns are misplaced.

The Law of the Sea Convention is remarkable in that the United States secured all its objectives during negotiations for the treaty, and it sets in stone the principle of freedom of the seas upon which our economy and strategic security depend. But this steadfast refusal to ratify the convention means the United States stands in the company of only a handful of maritime nations practicing ill-considered isolationism. Now that 160 states have accepted the convention, the United States can enjoy the fruits of its negotiating efforts by ratifying the agreement as well.

The time and political environment are right for statesmen in the 112th Congress and the Obama administration to spend a little political capital; ratifying the convention could serve as a trial balloon for bipartisanship at relatively low cost to the political system, while simultaneously signaling to allies that the United States continues to prioritize participation and leadership in the international order. Moreover, it could serve as a test case for bipartisan cooperation in advance of consideration of the New START treaty with Russia, if the 111th Congress does not bring New START to a vote.

Ratifying the convention would cost nothing and yet benefit the nation substantially. First, the United States already applies virtually all of the treaty’s provisions as a matter of state practice, and Washington expects other states to honor them as well. Second, even the one part of the treaty that President Ronald Reagan objected to — regarding rules for seabed mining — was redrafted and integrated into the treaty in 1994 to accommodate the United States and its friends and allies. Third, the Department of Defense, the Department of State, and the prior and current presidential administrations all favor ratification of the convention; among those intimately familiar with the treaty, there is unanimity that the United States should ratify it. Fourth, U.S. ratification would return leadership on global oceans issues to the United States. The rules and regimes engraved in the convention provide the framework for the use of naval power, resolution of maritime political and boundary disputes and shipping and oil drilling in virtually every strategic hot spot on the planet — the Yellow Sea, the South China Sea, the Indian Ocean, the Arctic Ocean, the Persian Gulf and the Mediterranean Sea and many others. Finally, consider how rare it is that a major treaty — one that protects and promotes every interest of the United States and its allies — is accepted practically without exception by a supermajority of the international community.

Following the Republican gains in the midterm elections, Senate ratification of the Law of the Sea Convention should serve as a test case for Congress’ ability to operate in a bipartisan fashion to secure America’s long-term interests, particularly on matters of national security.

Butch Bracknell is a Marine lieutenant colonel and Senior Fellow at the Atlantic Council. James Kraska is a U.S. Navy commander and professor of law at the Naval War College in Newport, R.I. This article was first published in The Baltimore Sun. Photo Credit: AP.