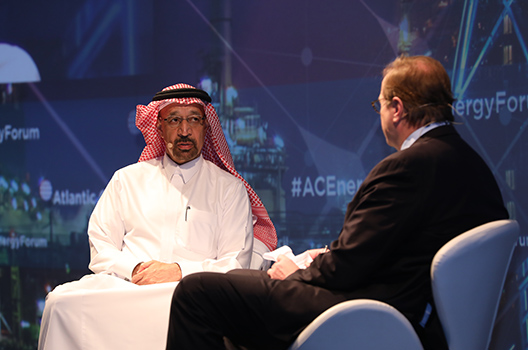 The Atlantic Council convened government, private sector, and academic experts to set the global energy agenda for 2019 at the Global Energy Forum in Abu Dhabi, United Arab Emirates, from January 11 to 13.

The future of the oil market was frequently discussed as policy makers and experts attempted to parse the dramatic developments of the past year and provide some guidance for what 2019 holds. Here are the highlights from those conversations:

The Global Energy Forum followed a tough month for oil as prices plummeted at the end of December 2018, nearly halving their October 2019 highs.

Officials from oil-exporting countries sought to calm fears of slowing global economic growth, the impact of re-imposed US sanctions on Iran, and a glut of US shale oil. “I am concerned about recent volatility and prevailing negative sentiment,” Saudi Arabia’s Minister for Energy, Industry, and Mineral Resources Khalid Al-Falih said on January 13. “But the present fundamentals are clearly trending in the right direction,” he added.

The Organization of the Petroleum Exporting Countries (OPEC) General Secretary Mohammed Barkindo said on January 13 that OPEC’s decision to cut production by 1.2 million barrels per day beginning on January 1, 2019 “as complex as it was, was data-driven.”

Al-Falih said the dramatic price drop in December was a misguided market reaction.

“I am concerned about recent volatility and prevailing negative sentiment, but the present fundamentals are clearly trending in the right direction. Demand growth remains healthy.”#ACEnergyForum #ADSW

Al Mazrouei, Barkindo, and Al Falih all were confident that OPEC would maintain its discipline on its production cuts. Al Falih also told CNBC’s Emma Graham that he was confident non-OPEC nations, such as Iraq, Mexico, and former Soviet states, would also take action to calm the market.

Iran in the Crosshairs

Brian Hook, the US special representative for Iran and senior policy advisor to US Secretary of State Mike Pompeo, said on January 13 that Washington wants to get Iran’s oil exports “to zero as fast as possible” in an effort to force Tehran back to the negotiating table after the Trump administration pulled out of the Iran nuclear deal in May 2018.

Hook said US pressure is focused on “the energy side because that is where Iran’s economy is structured in a way where it is its greatest vulnerability.”

There is “no reason to think” that US #sanctions on #Iran will lead to higher oil prices, the @StateDept‘s Brian Hook tells @PlattsOil‘s @miriammalek at #ACEnergyForum #OOTT #OPEC #JCPOAhttps://t.co/pWKzWsFWzT pic.twitter.com/AdyK0WiBLe

The US-China trade war has also contributed to a glut in the oil market. As the dispute heated up, China, the biggest buyer of US crude oil in the first half of 2018, decided in October to stop buying oil from the United States.

Al Mazrouei cited concern about the US-China trade tensions and warned of its impact on the world economy.

Adam Sieminski, the president of the King Abdullah Petroleum Studies and Research Center, said on January 13 that “concerns about the outlook for trade [could]. . . lead to a slowdown in spending and investment that would then slow down gross domestic product. . . [The] impact on [oil] demand would be a concern for everybody.”

Whither the US Shale Revolution?

In 2018, the United States became the world’s largest producer of crude oil for the first time since 1973. Its ascent was powered by the shale revolution, which Ellen Scholl, a nonresident senior fellow with the Atlantic Council’s Global Energy Center, examines in a new report.

Despite concern that the boom in US shale oil contributed to falling oil prices at the end of 2018, Al-Falih maintained that “healthy shale growth and a weak oil market are a contradiction in terms.”

Sieminski, Venture Global LNG Chief Commercial Officer Thomas Earl, and Thomas Marchetti, president of Energy Intelligence, all predicted in their January 13 panel discussion that the rapid growth of US shale should decline in the next few years as shale deposits become more difficult and expensive to access, capital markets dry up, and demand potentially decreases. “The growth rate [of shale] production is going to moderate,” Marchetti said, “and moderate at an accelerated pace.”

Despite the concerns of a volatile market, policy makers used the Global Energy Forum to announce new expansion projects and acquisitions.

A Transition Away from Oil?

As attempts to combat climate change drive a global transition away from fossil fuels, oil companies must both adapt their technologies to make their businesses more environmentally friendly and look to diversify their portfolios, Forum speakers explained.

Al-Jaber said ADNOC is already focusing “more on the environmental side and making sure that the old forms of energy in the future are cleaner.”

Adnan Shihab-Eldin, director general of the Kuwait Foundation for the Advancement of Sciences, said the Arab Gulf must lead the way on becoming greener. “We are sitting on 50 to 60 percent of the oil and gas assets of the world. We really have to take the leadership in making those oil and gas assets decarbonized,” he said.

Oil and gas companies are also beginning to diversify their portfolios as the energy transition begins in earnest. Musabbeh Al-Kaabi, the chief executive officer (petroleum and petrochemicals) for Abu Dhabi-based investment firm Mubadala, said on January 12 that his company, which once mainly focused on fossil fuels is now “recognized as one of the leaders of renewable energy” in the Middle East.

Claudio Descalzi, chief executive officer of Italian energy company Eni, said oil and gas companies “have to consider the environment, CO2 emissions, and pollution in general.” At Eni, he said, “our aim is to be completely carbon neutral.”

David Koranyi, a senior fellow with the Atlantic Council’s Global Energy Center, released an issue brief on January 13 that details how international oil companies around the world are preparing for the future of fossil fuel production and adapting to a more climate-friendly energy system for the twenty-first century.