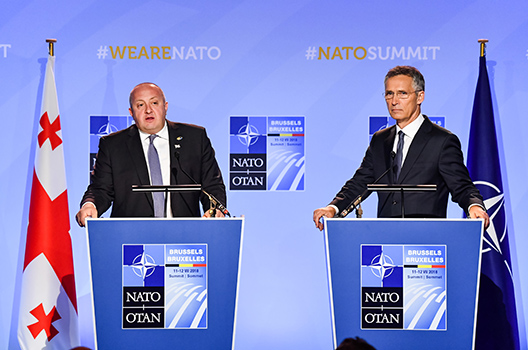 Exactly ten years ago, Russian forces attacked Georgia, bringing to a violent end a nearly two-decade long advance of a Europe whole and free. In the wake of NATO’s failure to agree on how to advance the membership aspirations of Georgia and Ukraine at its Bucharest Summit months earlier, Moscow acted to block those prospects with its invasion. Moscow’s actions in Georgia ten years ago previewed its far deadlier attacks on Ukraine, which continue today.

Ten years on, the NATO Summit in Brussels July 11-12 offers the prospect of reversing the shortcomings of Bucharest and restoring momentum to NATO’s Open Door policy.

US President Donald J. Trump’s meeting in Helsinki with Russian President Vladimir Putin has overshadowed the Brussels summit. What coverage there was of the NATO meeting largely focused on President Trump’s rhetoric and the debate over spending on defense among NATO allies. Lost amid the acrimony was the unified message the Alliance sent on enlargement, recognizing that extending NATO membership to nations who earn it can eliminate destabilizing security vacuums.

At least one person seemed to pay close attention to the summit – Putin – and he didn’t like what he heard. A week after the Brussels gathering, Putin voiced his clear opposition to further enlargement of the Alliance. “We will respond appropriately to such aggressive steps, which pose a direct threat to Russia,” Putin declared in Moscow to a gathering of his ambassadorial corps. “Our colleagues, who are trying to aggravate the situation, seeking to include, among others, Ukraine and Georgia in the orbit of the alliance, should think about the possible consequences of such an irresponsible policy.”

Putin essentially asserted a veto right over aspiring countries’ interest in joining NATO. Will the Alliance back down in the face of Russian opposition?

In Brussels, NATO leaders invited “the government in Skopje” – soon to become the Republic of North Macedonia – to begin accession talks leading to membership once it finalizes the deal on its long-disputed name with Greece, whose northern region is also known as Macedonia. In doing so, NATO reiterated its “Open Door” policy in which aspiring European states that wish to join the Alliance are welcome to do so, after meeting the standards and being accepted by consensus of the existing members.

This decision paves the way for North Macedonia to become NATO’s 30th member. The decision also reflects Allied leaders’ willingness to keep their pledge made at the 2008 Bucharest Summit that the nation would be invited to begin accession once it reached a deal on its name with Greece.

This would seem to augur well for the other two nations, Georgia and Ukraine, whose hopes were shelved at the 2008 Bucharest summit, when Germany blocked US efforts to offer both nations a Membership Action Plan to help them prepare for membership. Instead, Alliance leaders agreed that one day the two nations would become members of NATO.

This year, NATO Secretary General Jens Stoltenberg made clear that, “NATO’s door is, and will remain, open.” Such statements, coupled with the decision on Macedonia, send a credible signal to Georgia and Ukraine about their aspirations.

Macedonia’s experience provides a lesson for the Alliance and other aspiring states. When Macedonia stalled on its path to NATO ten years ago, uncertainty in the Western Balkans’ future tempted Putin to fill perceived vacuums and disrupt the process of transatlantic integration. On the eve of NATO’s enlargement decision, Greece expelled two Russian diplomats due to their efforts to provoke a backlash against the name deal and therefore disrupt NATO’s further enlargement in Southeast Europe. In October 2016, Russian intelligence fomented a coup attempt in Montenegro in an attempt to derail that nation from becoming NATO’s newest member.

NATO enlargement to Montenegro and North Macedonia will deter Russian hard power efforts to undermine those two states and help them resist Russian influence. Their integration into NATO will eliminate a perceived security vacuum and remove them as targets of Putin.

Just as NATO slowly but then decisively recognized the need to adopt deterrence measures toward Russia, allies have come to understand that Moscow seeks to exploit vacuums and vulnerabilities on the Alliance’s periphery.

Indeed, division within the Alliance and ambiguity in Georgia and Ukraine about their relationship with NATO left a security vacuum in Europe’s East which the Kremlin aims to fill. Both Georgia and Ukraine suffered Russian invasions and continued occupation of their territory – and in the case of Ukraine’s Crimea, annexation.

Enlargement to Georgia and Ukraine would eliminate the void in which they find themselves, help stabilize the region, and introduce predictability into those nations’ relations with Russia. This process played out in the Baltic states after they joined the Alliance in 2004. Estonia, Latvia, and Lithuania sleep better at night because they benefit from Article Five guarantees in which an attack on one is considered an attack on all. Ukraine and Georgia would also be better off with such guarantees.

NATO has pledged not to consign Ukraine and Georgia to a Russian sphere of influence or grant Russia a de facto veto over their aspirations to join the Alliance. However, leaving them in a gray zone, without the protection and security guarantees that come with NATO membership, exposes them to further Russian subterfuge and aggression. Russian Prime Minister Dmitri Medvedev said as recently as August 6 that “as for the recent NATO decision reaffirming its commitment to eventually admit Georgia, what can I say to this? It is an absolutely irresponsible position and a threat to peace.”

Georgian President Margvelashvili warned that unclear messages on Georgia’s path to NATO are “much more provocative for Russia… because unclear messages…[and] not taking bold steps, would provoke in any political system more hawkish thinking.”

Since the 2008 summit in Bucharest, leaders and the populations in both Ukraine and Georgia have been growing antsy about the seeming lack of progress toward achieving membership. Support in Ukraine for joining the Alliance has risen to 54 percent (from the low teens just five years ago) due to Russia’s illegal annexation of Crimea in 2014 and invasion of eastern Ukraine. Support in Georgia remains high but has been slowly eroding, according to recent surveys – and in the face of a concerted Russian disinformation campaign. Both aspirants need to see the light at the end of the tunnel.

In the summit this month, NATO leaders reaffirmed their support for the 2008 Bucharest Declaration that both nations will become allies. As he did with Macedonia, Stoltenberg reaffirmed the Alliance’s support for Georgia in particular. “It is ten years since the first meeting of the NATO-Georgia Commission,” Stoltenberg said. “In that time, our partnership has become increasingly close. NATO’s relationship with Georgia is unique. Georgia is one of the Alliance’s most important operational partners and a trusted friend.” Georgia has made significant contributions to NATO operations in Afghanistan and elsewhere and meets the military and other standards for membership.

Stoltenberg was a little less forthcoming when it came to Ukraine. “NATO is firm in our support for Ukraine’s sovereignty and territorial integrity. And we strongly condemn Russia’s illegal annexation of Crimea,” he said. Ukrainian President Poroshenko pushed for Ukraine to see the pledges made a decade ago at Bucharest come to fruition. “No other country in the world can prohibit [the] Ukrainian people or Georgian people [from] making the decision to be a member of NATO,” Poroshenko said.

Invasion and occupation of Ukraine and Georgia cannot become Russia’s means for blocking the integration of these countries into Euro-Atlantic institutions. And yet any NATO members who cite Ukraine’s and Georgia’s inability to control all their territory because of Russian aggression would do just that. For sure, there are questions about the defensibility of both countries given current occupation of parts of their territory. But a divided Germany following World War II did not keep West Germany from joining the Alliance in 1954, nor did tensions between Greece and Turkey block them from joining. There are numerous precedents in which NATO has limited the territory to which Article Five would apply, an option available in the cases of both Georgia and Ukraine.

This time in Brussels, the NATO communique reaffirmed the decision made at the 2008 Bucharest [NATO] summit “that Georgia will become a member of the alliance.” On Ukraine, the declaration stated, “We stand firm in our support for Ukraine’s right to decide its own future and foreign policy course free from outside interference. In light of Ukraine’s restated aspirations for NATO membership, we stand by our decisions taken at the Bucharest Summit and subsequent Summits.”

These statements are important but not good enough. Without a sense of timing on when such membership is coming, the dangerous gray zone that Ukraine and Georgia find themselves in will continue. Allies should not allow their aspirations to be held hostage by Russian occupation. Both should join Macedonia on a clear path forward.

David J. Kramer is a senior fellow at Florida International University’s Green School of International & Public Affairs in the Vaclav Havel Program for Democracy and Diplomacy and author of the recent book, Back to Containment: Dealing with Putin’s Regime.

Russia The Balkans The Caucasus

Image: Georgian President Giorgi Margvelashvili and NATO Secretary General Jens Stoltenberg give a statement ahead off a multilateral meeting of the North Atlantic Council with Georgia and Ukraine, during the NATO summit in Brussels, Belgium July 12, 2018. (REUTERS/Stringer)