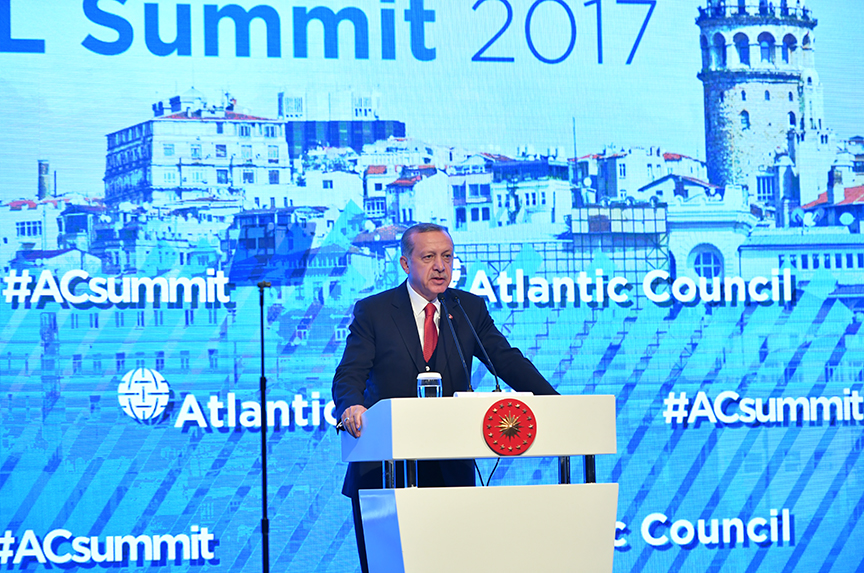 Turkish President Recep Tayyip Erdoğan, speaking at the Atlantic Council’s Istanbul Summit on April 28, urged the United States to end its support for Kurdish rebels in Syria and to extradite a cleric Turkey says orchestrated a failed coup attempt in July of 2016; he also accused some European countries of harboring terrorists.

Erdoğan’s remarks offered a preview of his upcoming meeting with US President Donald Trump in Washington on May 16. The Turkish leader had been unsuccessful in his efforts to convince former US President Barack Obama to drop his support for the Kurdish militias who have proven to be one of the most effective forces fighting the Islamic State of Iraq and al-Sham (ISIS) in Syria. He was optimistic that he could open a new, and very different, chapter in the US-Turkey relationship with Trump.

US support for the Kurds could be a sticking point in that relationship. In April, Turkey conducted a series of airstrikes against the Kurdish militias. These operations potentially put Turkey and the United States on a collision course.

Describing the Kurdish People’s Protection Units (YPG) and the YPG’s political arm, the Democratic Union party (PYD) as the “aborted children” of the Kurdistan Workers’ Party (PKK)—a group that both the United States and Turkey consider a terrorist organization—Erdoğan said these groups will, sooner or later, “bite the hand that feeds them.”

US support for the YPG in Syria has come in the form of airstrikes, military assistance, and hundreds of US military advisers. Erdoğan said the Kurdish fighters have been sharing with ISIS the weapons they receive from their international backers.

“Under the pretext of the fight against Daesh, we will not be tolerating any cooperation with another terrorist organization,” Erdoğan said. “We do not accept the US working in tandem with YPG and PYD in Syria because this undermines the good relations between [Turkey and the United States].”

ISIS is also known as Daesh.

Erdoğan said Turkey will retaliate against groups that attack it from across its borders. “We are not going to let a terrorist corridor thrive in the south of our country, and we are not going to tolerate any efforts to establish a state in the north of Syria,” he said. The Kurds control northeastern Syria.

Erdoğan delivered the keynote address on the second and final day of the Atlantic Council’s Istanbul Summit. In its eighth year, the summit convened a prominent gathering of government, private sector, and civil society leaders from around the world. Discussions focused on issues related to geopolitics and security, economic growth and trade, and energy security. The theme of this year’s summit was: Strengthening Transatlantic Engagement with a Turbulent Region.

Following his remarks, Erdoğan was asked by Frederick Kempe, president and chief executive officer of the Atlantic Council, what he expects from his meeting with Trump. “Are we to focus only on Daesh or on all terrorist organizations? If the focus is only going to be on Daesh that would be a mistake,” the Turkish president said he would tell Trump.

The Turkish president expects Trump—who ordered a missile strike on a Syrian air base on April 7 in response to a chemical weapons attack believed to have been carried out by Syrian President Bashar al-Assad’s regime—to adopt a more determined stance in response to atrocities committed by the Assad regime since the start of the war in 2011.

“For the first time, the Assad regime had to pay for its atrocities,” said Erdoğan who described the Syrian president as a “killer.”

Erdoğan said safe zones and no-fly zones should be created in northern Syria and rebels in these areas must be provided weapons and training. The war has killed more than 450,000 people and created more than five million refugees. Turkey today hosts around three million Syrian refugees.

Erdoğan said his “number one demand” from the Trump administration is the extradition of Fethullah Gülen, the US-based cleric accused by Turkish authorities of orchestrating the July 2016 coup attempt against the government. Gülen denies any role in the plot.

On this point, too, Erdoğan had been unsuccessful in convincing the Obama administration to accede to Turkey’s request.

Erdoğan described Gülen as a terrorist ringleader who has operations in 170 countries. “Such a terrorist should not be really living in the United States,” he said. “No civilized country in the world should be hosting such terrorists.” Gülen lives in exile in Pennsylvania.

On April 16, Erdoğan narrowly won a constitutional referendum that his critics fear paves the way to one-man rule. Turkey’s High Electoral Board on April 27 announced the final results of the referendum on expanding Erdoğan’s powers—the “yes” vote to approve sweeping constitutional changes prevailed with 51.4 percent support.

While Trump congratulated Erdoğan on winning the referendum, the Turkish opposition contested the results and observers said up to 2.5 million votes may have been manipulated. In a scathing report, European election observers noted that the referendum was conducted on an “unlevel playing field” and that “fundamental freedoms essential to a genuinely democratic process had been curtailed” as a result of a state of emergency imposed since July of 2016.

On April 26, days after the referendum, more than 1,000 people were arrested and 9,100 police officers suspended in a widening crackdown on alleged Gülen supporters.

These developments, including a crackdown on journalists and humanitarian aid groups, have strained Turkey’s relationships with the West, particularly in Europe.

Turkey will never compromise on democracy, international values and principles, the president asserted. “Our expectation from our allies… is for them to rid themselves of prejudices and black propaganda and to also stay away from double standards, and we expect them to continue cooperating with Turkey,” he said.

The Turkish leader noted that 249 people had been killed in the attempted coup and some of the “killers” are being “shielded by our so-called friends.”

Though he did not name names, Erdoğan said his government has evidence of European states harboring terrorists and those responsible for the bloodshed during the coup attempt. “These European countries should take a look at themselves and rethink their stance,” he said.

Asked by Kempe about the referendum’s impact, Erdoğan pointed to the results of the US presidential elections in which Trump’s rival, Hillary Rodham Clinton, won the popular vote yet Trump was elected president. In Turkey, Erdoğan said, the result out of the ballot box is what counts.

In a message to Europe—which has been most critical of what it perceives to be undemocratic developments in Turkey—Erdoğan said: “You supported the ‘no’ campaign and you lost. … We still keep our doors open.”

Stephen J. Hadley, an executive vice chair of the Atlantic Council’s board and a former National Security Advisor to President George W. Bush, in remarks introducing Erdoğan said: “In these testing times, the region and the world need a robust, vibrant, and democratic Turkey that respects human rights and the rule of law.”

“The United States and Europe need Turkey as a strong ally confronting the challenges that we all face,” he added.

In his remarks, Erdoğan said he also wants to deepen economic ties between the United States and Turkey. Describing the current bilateral trade volume—at $17.5 billion—as quite low, he said this needs to be leveraged and defense sales should be a key component.

Erdoğan was preceded in his remarks by his son-in-law, Berat Albayrak, Turkey’s minister of energy and natural resources, who described the steps Turkey is taking to diversify its sources of energy, including a strong embrace of renewables.

Erdoğan later noted his commitment to turning Turkey into an energy hub. Energy, he said, should be the key to cooperation between nations.