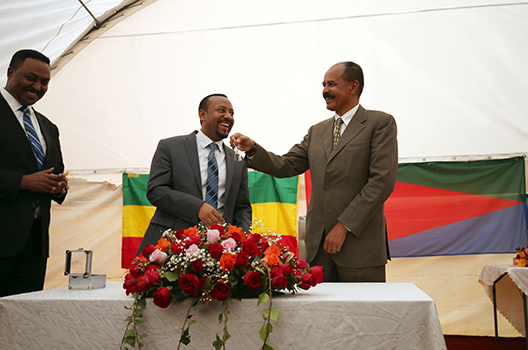 In June this year, Africa’s longest-running conflict appeared to come to a sudden end as Abiy Ahmed, the newly-installed prime minister of Ethiopia, made a compelling peace overture to his counterpart in neighboring Eritrea. After a couple of short meetings with Eritrea’s president, Isaias Afwerki, peace was summarily declared. Parades were held, banners festooned both capitals, and the habitually cheery Abiy and the often surly Isaias were photographed arm in arm, with broad smiles on their faces.

A series of historical reversals then occurred: telephone lines were unblocked for the first time in decades, airplanes started flying between Asmara and Addis Ababa, and families that had been separated for twenty years—since 1998, when the border war between Eritrea and Ethiopia broke out— were joyously reunited.

History was made again on September 11 as Abiy and Isaias ceremoniously reopened several border crossings, including at the Debay Sima-Burre border point, which sits on the road to the Eritrean port of Assab. Opening this crossing will give Ethiopian exports new access to the Red Sea, with economic dividends in store for both countries.

But even as both governments have rushed headlong toward peace, Ethiopia’s former ruling party has threatened to be a spoiler. That group, the Tigrean People’s Liberation Front (TPLF), controls key territory along the Eritrean border and has deep influence over the local population on the Ethiopian side of the line. Because of this, peace festivities have been tinged with uncertainty over when, and whether, Abiy would actually be capable of prying Ethiopian troops—many of whom are presumed loyal to the old guard—away from Eritrea’s border.

As the weeks have dragged on, concern inside Eritrea (and within its restive diaspora) has grown. Though desperate for peace, Eritreans have withstood two decades of harsh martial law in their efforts to protect the country’s territorial sovereignty, and the withdrawal of Ethiopian troops from the border, especially from the flashpoint town of Badme, remains of paramount importance. For most Eritreans, there can be no peace without it.

But there may have been a significant development on that front on September 11, though it was overlooked by most reporters. In his remarks, Abiy actually seemed to suggest for the first time that Ethiopia may begin some sort of a demobilization process for the troops stationed on the border, and that Eritrea would join in.

“As of today,” Abiy stated, Ethiopian troops stationed on the border “will be gathered to camps and ease tension that was extreme. The same will be done from the Eritrean side.” He then mentioned the possibility of training or livelihoods programs for the troops. It was a strange and vaguely worded statement, but he seemed to be suggesting the start of a demobilization and reintegration program for the troops stationed along the border. If so, that would be game-changing news. It would indicate that Abiy believes he has succeeded in wresting enough power from the TPLF hardliners that he is able to disarm their troops.

The withdrawal of Ethiopian troops from the border will also have enormous implications for Eritrea, which has effectively been in a state of emergency since 1998. The decisive end of the war will require the Eritrean government to normalize its military conscription program, which is currently indefinite, and to implement the country’s long-shelved constitution (political repression and the indefinite military service have, along with a range of economic factors, led to large outpouring of refugees from Eritrea.)

That presents challenges to the Eritrean government because before either of those things can happen Eritrea’s economy will need hard kickstarting. After all, the government says that 80 percent of Eritrea’s military conscripts are not actually under arms, but are instead working as bureaucrats, teachers, construction workers, and in other occupations at sub-market wages. For Eritrea, “demobilization” will mostly mean not putting down weapons, but transitioning those positions into market-wage, at-will jobs.

Eritrea’s military conscripts can’t be eased into the private sector economy until the economy is rolling again. And currently, the government can’t afford to pay public servants a living wage. The imperative of boosting Eritrea’s economy before any political improvements are made explains why both Abiy and Isaias are so focused on resuming economic ties and trade lines between their countries. It also explains why both of them have hesitated to give a timeline on troop withdrawal. But events on September 11 suggest that the troop withdrawal—and with it, the normalization of politics on both sides of the border —is getting much closer.

Bronwyn Bruton is deputy director and director of programs and studies at the Atlantic Council’s Africa Center. Follow her on Twitter @BronwynBruton.