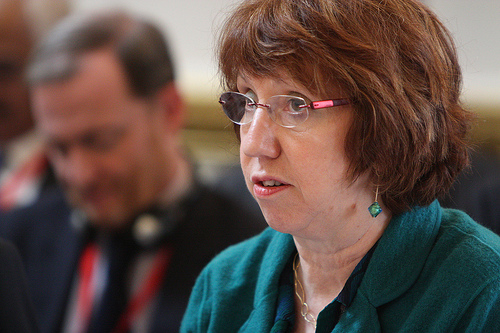 EU foreign policy chief Catherine Ashton is a skilled negotiator; the recent Serbia-Kosovo breakthrough will probably secure her a place in the history books. It is rather unlikely, though, that 2009 – the year EU leaders chose Ashton as High Representative of the Union for Foreign Affairs and Security Policy – will be remembered by future generations as the point of departure of a new European foreign policy, establishing the EU as a powerful actor on the world stage.

Four years after the Lisbon treaty came into force, one of its key provisions, a new definition of the position of the High Representative and the creation of a diplomatic service (called the European External Action Service, or EEAS), does not look like a success to many observers. Europeans “have no organized foreign policy to speak of,” Washington foreign policy commentator David Rothkopf observed recently. Is he right?

The EU’s neighborhood policy, often cited by Ashton as a key priority, indeed presents a rather depressing picture. The bloc’s transformational power seems to have had its day. Only in the western Balkans does its old magic still work; here EU membership remains a desired, and achievable, goal, capable of moving societies forward and even forcing them to make hard choices. But in other regions skepticism, reluctance, and distrust from both sides have effectively shut the door to the EU, at least for a while. Enlargement fatigue has pervaded the the Union. And with the EU’s massive internal troubles, the attraction to join the bloc has decreased.

In addition, what has not worked yet is the idea of “enlargement light” as formalized in the “neighborhood policy,” that is, gradually bringing countries closer to the EU by offering them a deepened relationship. The incentives are much too low for countries to change course, especially when other powerful players with regional interests are ready to be much more flexible and much less demanding.

True, the EU has a certain degree of leverage over neighboring countries such as Morocco, Tunisia or Moldova. But these are the easy cases: small, economically weak and in need of a powerful patron. By contrast, regional powers like Egypt, Turkey or Ukraine are increasingly disinterested in aligning themselves to EU policies. Instead they are looking for their own, distinct path into the future, increasingly dismissive of advice coming from Brussels. They still want trade and aid, and visa-free travel, but they appear to be less and less inclined to compromise on issues of internal governance.

The Arab Spring seemed to offer a new chance for a new partnership between Arab countries and the EU. But an inward-looking Europe missed that opportunity and did not act forcefully, decisively, or in unison. After some initial interest in helping to shape the future of the region (giving them incentives to move toward liberal democracy and market economy) EU countries lost interest, especially when it became clear that emerging out of these countries was not a liberal and democratic opposition, but a hard-edged political Islam.

In principle, the EU has more leverage in the east than in the south, as the path to EU membership for eastern Europeans is still a theoretical option. But it is here where the EU competes more and more with an assertive Russia. President Vladimir Putin is trying hard to pull Russia’s “near abroad” back into the Kremlin’s orbit. EU countries, while feeling uncomfortable about it, have not yet mustered the political will to start a counteroffensive by putting big incentives on the table and by offering clear perspectives for closer ties. They sometimes enter into the geopolitical game, but then shy back again. In other words, the EU has no strategy for dealing with the east.

The relationship with world powers is usually cited as a second priority for a common EU foreign policy. Here we also see little progress since 2009. European capitals are keen to keep control of their special relationships with the US, Russia, and China. Instead of gaining more leverage by acting in concert, they often compete for contracts and attention, inviting Moscow and Beijing to use a divide-and-rule strategy.

That German Chancellor Angela Merkel now has openly and publicly sided with Beijing against Brussels in the trade dispute with China is not a surprise. The short-term interests of big companies are trumping the longer-term interests of building leverage through common EU action. The relationship of European powers with China is purely commercial, ignoring the fact that Europe has a huge interest in making China a responsible stakeholder in the liberal world system, and in finding peaceful solutions to conflicts with its neighbors. Beijing is playing a smart strategic game, using carrots and sticks, in order to gain leverage over Europe. Europeans are failing to respond in a concerted manner.

Toward Russia at least, there is the recognition that the old approach has failed. While there is still talk of Russia’s modernization as a goal, Putin’s emergence as an openly autocratic leader has effectively ended all hopes of “Wandel durch Annäherung” – the idea of encouraging liberalization in Russia through rapprochement. Merkel deserves credit for having publicly shown Putin the cold shoulder. Business relations are thriving, but on the political level we seem to be at a loss. Neither Berlin nor Brussels have proposed a new conceptual framework and we seem to be waiting for events to unfold that will require a response.

A bright spot of Ashton’s work as the EU High Representative has been the relationship with Washington. The US has invested considerably in its relationship with the EU, hoping that the EU post-Lisbon would emerge as a much more powerful foreign policy actor, emerging as the key partner to American foreign policy. Former Secretary of State Hillary Clinton has done a lot to strengthen Ashton’s hand.

Yet Ashton has not emerged as a strong figure on the world scene. Today there is not much more common EU foreign policy as there was in 2009, when Javier Solana (who had an institutionally much weaker position) was replaced by Ashton. France on its own is still a much more powerful foreign policy actor than the 27 EU countries together. EU foreign ministers, meeting every month, often easily agree on the small issues. On the big ones deep divisions remain. This week brought another low point as EU member states could not agree on a common position regarding the question of arming the Syrian rebels.

But it would be wrong and misleading to blame Catherine Ashton for this sorry state of affairs. It is the EU capitals that deserve all the blame, especially the bigger ones who have weight beyond Europe: London, Paris, and Berlin. They have sent Ashton and her new diplomatic service on a mission impossible: administrating and leading a common foreign policy that does not yet exist. Ashton and the EEAS have no choice but to pursue a minimalist approach. Higher ambitions are being undercut and vetoed by the EU’s big players. The political will to do things together is notable for its absence.

Next year, EU leaders are going to choose Ashton’s successor. If they want to keep a useful scapegoat for their own failures to develop common policies, they may keep the status quo. But if they want the EU to become a power that pursues common interests in its neighborhood and on the world stage, they need to invest much, much more.

First, EU leaders must start to find agreement on the substance of foreign policy and provide the High Representative with clear direction. EU member states need to find a consensus on the most pressing issues of the day, such as the conflict in Syria, as well as on the big strategic questions, such as a policy toward Asia-Pacific. The EU’s foreign policy chief can help in that process, but it must be led by the capitals who control the power resources.

Second, EU leaders must constantly push their own foreign ministers to support the High Representative in Brussels, putting national resources at the service of common policies.

Some years ago, it was reasonable to argue that the EU could live with a rather modest foreign policy, even with a minimalist approach. But as we see US power receding from Europe and its neighborhood, Europeans need to raise their game and take common responsibility for the maintenance of the liberal order in their neighborhood and beyond. Today, a common foreign EU policy is no longer a luxury. In a post-American environment, Europe needs to turn itself into a powerful actor or face the decline of the order on which its well-being relies.

Ulrich Speck is a foreign policy analyst based in Heidelberg. He’s the editor of the Global Europe Morning Brief. This piece first appeared on the IP Journal.