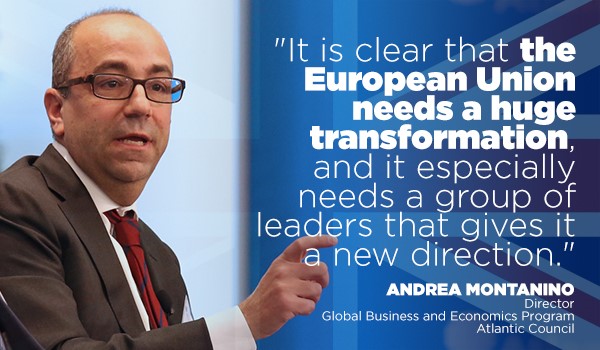 We asked our experts to tell us what the European Union needs to do differently in light of the referendum. This is what they had to say:

Andrea Montanino is the director of the Global Business and Economics Program at the Atlantic Council. He was formerly executive director of the International Monetary Fund representing the governments of Italy, Albania, Greece, Malta, Portugal, and San Marino.

It is clear that the European Union needs a huge transformation, and it especially needs a group of leaders that gives it a new direction. I would like to see on the day after the referendum the leaders of EU member states meeting in Brussels and taking a number of decisions that will deepen the union.

First, they should pass a law to abolish most of the regulations that exist—a huge simplification of the approach. Just to give an example, the EU came out with a regulation that Italian fishermen cannot use a certain safe product to brighten mussels. There is a regulation at the EU level that controls brightening of mussels!

Second, European leaders must decide that by the end of this year there will be a Capital Markets Union and the Digital Single Market. These are two elements that can make European companies more competitive and bring more financial resources to startups.

Third, there should be a decision to have euro bonds—a new bond issued by a European agency—to finance the migrant crisis.

Fourth, the leaders need to provide a mandate to the European Stability Mechanism to prepare and issue euro bonds for growth—euro bonds targeted for human capital, infrastructure, and research and development. These euro bonds can be a European issuance of debt up to five percent of European GDP, which means 700 billion euros that you can inject into the European economy and show that European institutions are doing something concrete to create jobs. Given the current interest rates, this can be a debt easily issued at a rate that is less than one percent, a ten-year bond in an amount that will not crowd out other issuances of debt by member states.

Q: Is the EU considering any of these measures?

Montanino: No. There is huge opposition from Germany on things like issuing euro bonds and increasing the European budget, and there is also a lot of anti-European sentiment among the publics.

Q: In light of a Brexit, do you see a more complicated relationship between Germany and the other EU member states?

Montanino: Germany is clearly the most powerful country in Europe by far. It has always been the biggest economy, but now the gap with the others is really impressive. [It’s relationships] will depend very much on how Germany behaves. If its leadership understands that they are called by history to play a certain role to deepen the European Union and they do it in an inclusive way, then it can be a very helpful relationship.