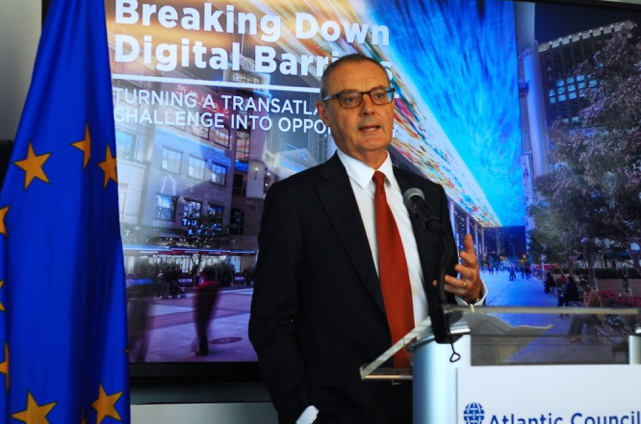 The European Union has rolled out its long-awaited plan to forge a digital single market (DSM) among the EU’s 28 member nations—an ambitious but controversial proposal that aims to tear down regulatory walls and boost Europe’s share of the online economy.

On May 6, the same day European Commission President Jean-Claude Juncker unveiled the plan in Brussels, top US and EU officials debated its objectives at a panel in Washington sponsored by the Atlantic Council’s Global Business & Economics Program.

David O’Sullivan, the EU’s Ambassador to the United States, said the 16-point proposal could pump $470 billion (€415 billion) a year into Europe’s generally stagnant economy while creating hundreds of thousands of new jobs from Amsterdam to Zagreb.

“This is really the new frontier for the European community. We are entering a digital era, and this is very timely and absolutely necessary,” he said. “It’s a road map of where we are today and how to get to a single digital market in Europe in a few years’ time.”

O’Sullivan said the DSM strategy rests on three pillars: offering better access for consumers and businesses to digital goods and services across Europe; creating the right conditions and a level playing field for digital networks and innovative services to flourish; and finally, “maximizing the growth potential” of the European digital economy.

At present, he noted, only 15 percent of European citizens shop online from another EU member country, while just 7 percent of European small- and medium-sized business sell across borders—meaning that the region is missing out on the Internet revolution.

Building a unified DSM, he predicted, would be worth an additional 4 percent of GDP, which translates into an extra $1,500 for every one of the EU’s 503 million inhabitants.

From left: Frances G. Burwell, Vice President and Director of Transatlantic Relations at the Atlantic Council; David O’Sullivan, the European Union’s Ambassador to the United States; Marcus D. Jadotte, Assistant Secretary for Industry and Analysis at the US Department of Commerce; Nuala O’Connor, President and CEO of the Center for Democracy and Technology; and Daniel M. Price, Managing Director of Rock Creek Global Advisors, participate in a May 6 panel on the EU’s “Digital Single Market” at the Atlantic Council. (Atlantic Council/Larry Luxner)

“It’s difficult at my age to wake up and feel excited about a new initiative coming out of Brussels, but this is a transformative proposal,” said O’Sullivan, an Irish diplomat who served as Chief Operating Officer of the EU’s European External Action Service before coming to Washington in November 2014. “It’s hugely important for Europe, and it’s hugely important for transatlantic relations.”

He denied suggestions that the DSM, which includes things like an end to unjustified geo-blocking—a discriminatory practice in which online sellers either deny consumers access to a website based on their location or re-route them to a local stores with different prices—would create a “digital Fortress Europe” that blocks US firms from competing.

“We must not be naïve. There are times when regulation is necessary to make markets function effectively. Success should never be penalized,” said O’Sullivan. “On the other hand, restricting consumer choices or being willfully unclear about what happens to our data is no more acceptable on the Internet than it is in the material, real-world economy.”

He added: “This is not going to be easy. I’m not pretending we can just wave a magic wand. It’s an ambitious agenda.”

Yet Frances G. Burwell, Director of Transatlantic Relations at the Atlantic Council and moderator of the panel, noted that digital issues “are a source of transatlantic discord,” encompassing subjects from taxation and privacy to EU anti-trust legislation and Edward Snowden’s revelations of National Security Agency spying on European leaders.

“As the EC launches its initiative, it’s important to remember there’s no such thing as a digital island, even if it is the size of a continent,” she said. “We will disagree. I don’t think there’s anything wrong with that. But it’s worth having this conversation.”

Joining O’Sullivan and Burwell in the discussion were Marcus D. Jadotte, Assistant Secretary for Industry and Analysis at the US Department of Commerce; Nuala O’Connor, President and CEO of the Washington-based Center for Democracy and Technology; and Daniel M. Price, Managing Director at Rock Creek Global Advisors.

“We recognize the opportunity—both for European consumers, and for American companies doing business in Europe—of the concept of a digital single market,” said Jadotte, adding that establishment of such norms could serve as a counterweight to policies in Russia and China that are harmful to US companies.

Yet the US Commerce official said he’s concerned about suggestions “that reforms were a path to disrupting or removing US firms from the European market. That is unhelpful.”

O’Connor said that despite her long-term optimism, she’s pessimistic that the DSM proposal will address her organization’s immediate worries.

“We’re concerned not only about privacy rights but also access to information. I see much good in the proposal, and much to be concerned about as well. The Internet does not stop at the borders of Europe,” she said. “We want to see a truly global, integrated Internet for anyone around the world, and that comes with respect for privacy.”

O’Connor, whose nonprofit organization aims to “promote an open, innovative and free Internet,” said the issue of online surveillance has not been discussed enough.

“I’m surprised to see that omission in this proposal,” she told the audience, which included representatives from at least a dozen EU member countries. “We often hear that the Europeans know more [than Americans] about surveillance and counterterrorism. If people are going to trust their digital communications, they need to know they will be kept sacrosanct, and safe from the prying eyes of their governments.”

Following the Snowden revelations, she said, the CDT noted a “dramatic uptick” in public fear of Internet surveillance, with 15 to 20 percent of individuals reporting in surveys that the scandal changed their online behavior.

“We understand the very real concerns about terrorism and hate speech, but recently I’ve become even more of an ardent free-speech fanatic,” said O’Connor, a former executive with Amazon.com and General Electric who is a globally recognized authority in Internet and technology policy—particularly in the areas of privacy and information governance.

Price, a trade expert, said many things about the DSM worry him, too, though he said he’s hopeful “that the aim of this initiative is not to create national champions at the expense of global companies already operating in the EU market, or that it intends to make up for the fact that Europe has missed a step in the development of the digital economy.”

Image: David O’Sullivan, the European Union’s Ambassador to the United States, said May 6 at the Atlantic Council that a plan to forge a digital single market among the EU’s 28 member nations could pump $470 billion (€415 billion) a year into Europe’s generally stagnant economy while creating hundreds of thousands of new jobs from Amsterdam to Zagreb. (Atlantic Council/Larry Luxner)