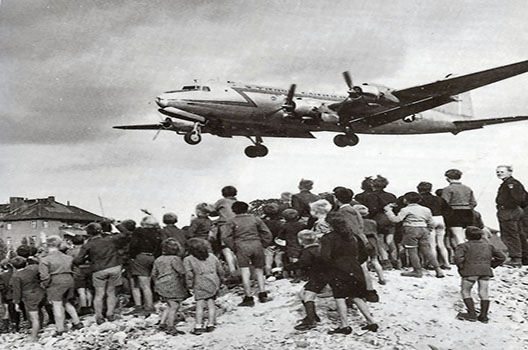 Seventy years ago this week, the Soviet Union blockaded access to West Berlin in an effort to score an early win in the first major crisis of the Cold War. What the Kremlin hadn’t expected was an unbending United States, which, with its UK allies, launched the Berlin Airlift, or “Operation Vittles.”

After 318 days and some 270,000 flights carrying 1.5 million tons of supplies, Moscow lifted its embargo, unwilling to test US resolve or military capability. Less than a year after that, in April 1949, twelve countries’ leaders signed the North Atlantic Treaty, resulting in the creation of NATO.

North America and its European allies are now facing one of their most crucial tests since then, involving tit-for-tat trade blows amid escalating rancor. So, it’s worth reflecting on the Berlin Airlift’s deeper message: had the United States not demonstrated unflappable resolve then, had Berliners and western Germans doubted American purpose or opposed that risky operation, the Cold War might have ended much earlier and with Communist victory.

With history in mind and the future at stake, I visited Brussels and Berlin last week to fact-find and, via the Atlantic Council 360 / Open Source Summit and its Digital Forensic Research Lab, to animate a new generation of digital freedom fighters on the front lines in democracy’s new battle of truth against disinformation.

We also convened our tenth annual Freedom Awards in Berlin on Saturday, honoring extraordinary women. They included former Secretary of State Madeleine Albright, the nine-year-old Syrian wunderkind Bana Alabed, the Afghan singer-activist Aryana Sayeed and the International Women’s Media Foundation. Said Albright in setting the evening’s tone, “we are gathered this evening in a city that was once decimated and divided, but now reborn into a capital at the heart of a new Europe.”

Yet all the inspiration of that moment couldn’t cloak the rising dangers of a distracted United States and a Europe astray. In both Berlin and Brussels, I met European decision makers who worried that the seven-decade US commitment to Europe’s security was in doubt, and still others who saw that as an opportunity to deepen their own European purpose. I heard concepts like “European strategic autonomy” bandied about, without either the political unity, military resources, nuclear deterrent or strategy to pull it off.

For all the concern I heard here about America’s direction, I came away more in doubt about Europe’s future. New coalition struggles over migration are not just unsettling the German government, but also raising questions about the political stability and direction of Europe’s most critical player. Italy’s populist government will test the future of the Eurozone and perhaps the European Union.

From Brexit in the United Kingdom to nationalist impulses in Central Europe, populism raises existential questions for a European project that requires pooled sovereignty. Immigration debates have stirred Americans over issues of divided families in past days, but in Europe those challenges go deeper, as migrant controversies can bring down governments and have ignited conflicts among EU members about how to share responsibilities for refugee flows.