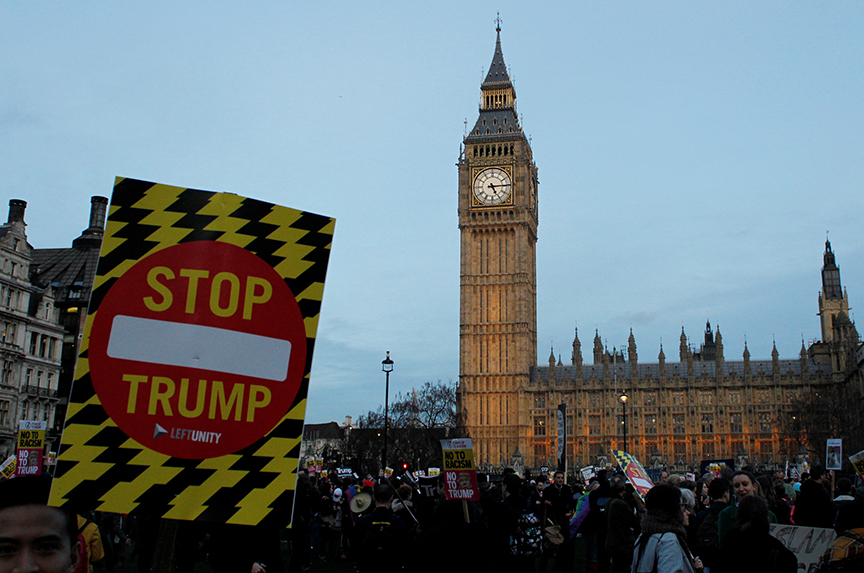 A demonstrator holds a placard during a protest against US President Donald J. Trump in London on February 20. (Reuters/Tom Jacobs)

Of all American alliances around the globe, the transatlantic relationship is the crown jewel. Despite disagreements and quarrels, the United States and Europe have together built and defended the liberal order for more than seventy years.

March 8, International Women’s Day, is an official UN commemoration day and as such, part of that liberal order. Symptomatically for the current state of the transatlantic link, many thousands of pink-knitted “pussy hats”—a symbol of protest against US President Donald J. Trump—are expected to be seen on the streets in the United States and Europe on March 8. Over a month ago, on January 21, the Women’s March on Washington echoed all over the globe as one of the world’s bigger protests against the newly inaugurated US president.

In Europe, protests against the Trump administration have continued—1.8 million Britons have, for example, signed a petition calling for the American president to be denied an official state visit to the United Kingdom. In Germany, a recent Infratest poll showed that public trust in the United States fell from 59 percent to 22 percent between early November of 2016 and late January, equaling the level of trust in Russia (21 percent).

Given this backdrop, protocol officials are scratching their heads in preparation for Trump’s visit to Europe in May. Deft planning may be necessary to avoid the risk of demonstrators offending the president.

It is worth noting that the transatlantic relationship has survived European protests against US presidents in the past. In the 1960s, demonstrations were held in major capitals like London, Berlin, Paris, and Rome against the US war in Vietnam. In the 1980s, there was significant upheaval against the US deployment of the short-range Pershing II nuclear missile in West Germany. In the early 2000s, the Iraq war threatened to tear the transatlantic alliance apart with massive demonstrations all over the Continent.

While the European public is worried about the Trump administration’s perceived disrespect of fundamental values, the political leadership has other concerns. Trump has described NATO as “obsolete” and the United Kingdom’s decision to leave the European Union as “smart,” thereby questioning the two cornerstones of the transatlantic alliance: collective defense and European unity.

Political leaders in Europe will have to do a delicate balancing act. Europe is mindful of its dependence on the United States for its defense. For a majority of Europeans, the United States is still the preferred partner to preserve the liberal order. Public concerns must, therefore, be addressed even as governments work with the United States to try and resettle the transatlantic bargain so that the costs and benefits to each party are acceptable.

However, the transatlantic community is not just a matter of common interest. More fundamentally, it is a matter of trust. Both dimensions must be taken into account.

First, let us take a look at the transatlantic bargain. In essence, the deal since 1949 has been that the Americans will help the Europeans if they (a) help defend themselves and (b) get on with building a united Europe.

On defense, Trump has made remarks that are controversial, but in the end, negotiable. This would mean increased European spending on defense with the aim of better burden-sharing, NATO doing more to fight terrorism, and a detente with Russia.

It is noteworthy that Trump has not expressed an interest in dissolving NATO. On the contrary, despite his concerns, he has said that NATO is “very important to me.” European leaders can conclude from this that there is enough common ground to find a way forward as long as there is a realization that Europe has to deliver at a higher level.

Despite some ambiguity, American presidents have supported European integration for the past seventy years. After the United States was drawn into two World Wars, both originating in Europe, unity on the Continent has been defined as vital for the United States’ national security.

That no longer seems to be the case. In a remarkable interview with the Times of London and Germany’s Bild on February 16, after having paid homage to Brexit and anticipating others to follow the British example, Trump declared with regard to the EU that “I don’t really care whether it’s separate or together, to me it doesn’t matter.”

The EU is facing multiple crises that originate both from the outside—terrorism, an aggressive Russia, and massive migrant flows—and from the inside—weak economies, increasing inequality, and the rise of anti-EU populism and nationalism.

There is no option to European integration if peace and prosperity is to be maintained. An American president who roots for Europe’s fragmentation and disintegration is entering dangerous territory.

European leadership must, therefore, continue to demand from the United States, in the words of European Council President Donald Tusk, the “wholehearted and unequivocal support for the idea of a united Europe.”

European leaders must themselves get serious about finding common solutions to the many challenges facing the Continent, even if it means putting European integration ahead of national interests.

Finally, the transatlantic relationship is not only built of transactions but on a sense of community, of trust, and a collective identity of shared values, norms, and practices.

Trump’s consistent lack of acknowledgement of values such as democracy, fundamental freedoms, respect for human rights, and the rule of law places him outside that identity and circle of trust. It is one thing to occasionally not comply with these values. That has happened before on both sides of the Atlantic. It is quite something else when leaders shun these values altogether.

Questions about US trustworthiness damage the foundation of the transatlantic community. Reassurances from Trump administration officials, including Vice President Mike Pence, on shared values and US commitment on their recent visits to Europe were appreciated by their European interlocutors. While these statements injected a degree of optimism in Europe, they were not sufficient to repair the damage that has already been done to the transatlantic relationship.

A consistency of words and actions, from all levels of the Trump administration, will be crucial to reassuring the United States’ allies. When Trump attends the NATO summit in Brussels in the spring, allies will listen carefully not only to what he says, but also to what he does not say. That outcome will determine the prospects of negotiating a new transatlantic bargain with fairer burden-sharing and a more efficient common response to new threats.

Anna Wieslander is the director for Northern Europe at the Atlantic Council and secretary general of the Swedish Defense Association. You can follow her on Twitter @AnnwieAnna.