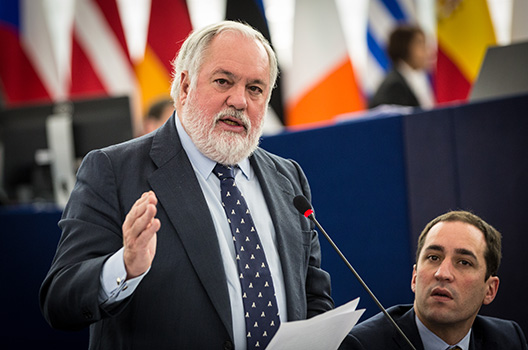 Europe has seized the opportunity provided by the Ukraine crisis to improve its energy security, according to Miguel Arias Cañete, Commissioner for Climate Action and Energy in the European Commission.

The annexation of Crimea by Russia in March of 2014, and Moscow’s decision to shut off gas to Ukraine in June — echoes of the Kremlin’s actions in 2006 and 2009 — show just how vulnerable European countries are because of their dependence on Russia for gas, Cañete told a meeting hosted by the Atlantic Council’s Global Energy Center on February 3.

About one-third of Europe’s gas comes from Russia.

“When it comes to energy, don’t put your fate in the hands of autocratic regimes,” Cañete said.

“Yet, through great crisis comes great opportunity. Europe has seized this opportunity,” he added.

Since the annexation of Crimea, European leaders have adopted an energy security strategy and decided to create an energy union.

The European Commission will present the details of this energy union on February 25.

Cañete said the union would be based on five principles: supply security; a competitive European Union-wide energy market; a reduction of energy demand; de-carbonization of the energy mix; and research and innovation.

“We will double our efforts to diversify energy suppliers, sources, and routes,” said Cañete.

Russia uses its gas supplies to Europe as a political tool.

“Our main objection was Russians did not comply with any European regulations,” Cañete said, explaining the European position on South Stream.

The pipeline plan also did not diversify European importers’ suppliers or their routes.

“It is critically important that the EU follow [its] own laws because it is much easier at the end of the day to rely on your legal system for the reasons South Stream became impractical than it being a political issue,” said Morningstar, who previously served as US Ambassador to the European Union and Special Envoy for Eurasian energy.

“It can be, to some extent, depoliticized by sticking to the laws and saying ‘Russia or anybody else, you can do whatever you want in the EU as long as you comply with our law,’” he added.

Cañete said Putin’s decision to ditch South Stream provided a lesson as well as an opportunity for Europe.

This corridor comprises already operating, planned, and prospective pipelines that link the oil-rich Caspian Sea to European and global markets.

“We want to develop the Southern Corridor, but as South Stream has been cancelled in Southeast Europe we also have to develop infrastructure,” said Cañete.

European officials will gather in Sofia, Bulgaria, next week to take stock of the availability of gas infrastructure and discuss ways to make it more efficient.

Image: “We will double our efforts to diversify energy suppliers, sources, and routes,” Miguel Arias Cañete, Commissioner for Climate Action and Energy in the European Commission, said at the Atlantic Council on February 3. (Wikimedia/ Claude Truong-Ngoc)