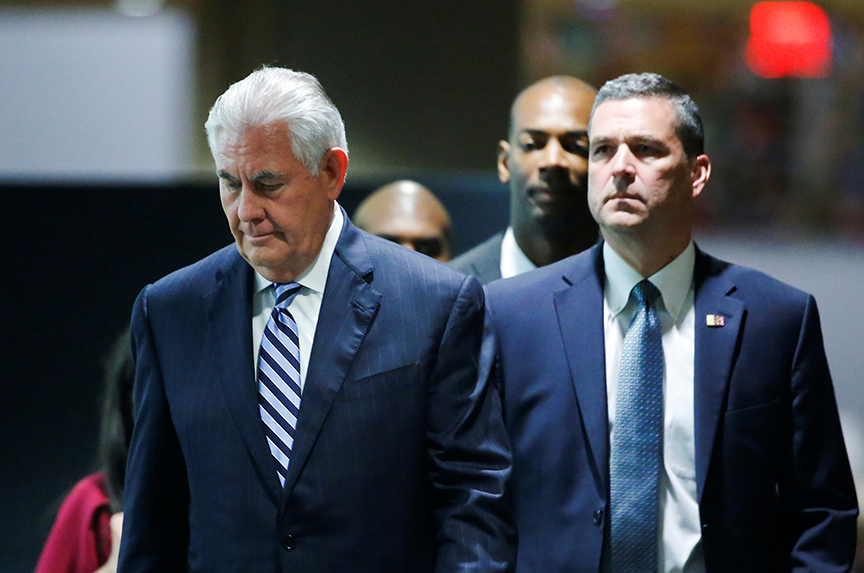 European ambassadors to the United States on September 25 defended the nuclear deal with Iran, saying it is working, while warning that reopening negotiations would be a nonstarter and walking away from the deal would have serious consequences.

This joint defense comes as US President Donald J. Trump, who has to certify to the US Congress by October 15 that Iran is complying with the terms of the agreement, has reiterated his displeasure with the deal.

Germany’s ambassador to the United States, Peter Wittig, said the onus is on those who seek to renegotiate the deal to prove that first, renegotiation is possible, and second, it will deliver better results. “We don’t think it will be possible to renegotiate it and we believe there is no practical, peaceful alternative to this deal,” Wittig said.

“I can think of no regional issue that we have with Iran that would not be even more difficult to handle if Iran possessed nuclear weapons,” said O’Sullivan.

France’s ambassador to the United States, Gérard Araud, said reopening negotiations on the deal “is a nonstarter and trying to get it is a dead end.” He said that at a ministerial meeting in New York last week there was a very clear message from Iran, China, and Russia that the agreement will not be reopened.

Stuart E. Eizenstat, chairman of the Iran Advisory Board at the Atlantic Council’s Future of Iran Initiative, summed up the concern both in Washington and in many European capitals that Trump may seek to unravel the nuclear deal. “It now appears that Washington, rather than Iran, may be a bigger threat to the JCPOA,” he said, referring to the Joint Comprehensive Plan of Action or the nuclear deal with Iran.

Eizenstat delivered opening remarks at an event at the Atlantic Council on September 25. O’Sullivan, Wittig, Araud, and Britain’s ambassador to the United States, Kim Darroch, next took part in a panel discussion. Barbara Slavin, director of the Atlantic Council’s Future of Iran Initiative, moderated the discussion.

Pointing to the challenges facing the JCPOA from the Trump administration, Slavin said it may be up to the Europeans to save the deal.

All four ambassadors reiterated their commitment to the agreement.

Noting that the deal is a multilateral agreement, O’Sullivan said, “the global community expects all parties that have signed up to the agreement to implement it and to do so fully.”

Darroch said: “We think we are more secure because of this deal and that’s why, as long as the Iranians continue to comply with it in the view of the [International Atomic Energy Agency], we will continue to support it.”

Iran and the P5+1 countries—the United States, the United Kingdom, France, Russia, China, and Germany—reached a deal on July 14, 2015, that sought to ensure that the Islamic Republic will have a peaceful nuclear program.

The United Nations’ nuclear watchdog, the International Atomic Energy Agency (IAEA), has certified multiple times since then that Iran is abiding by the terms of the agreement.

Trump, however, continues to criticize the agreement.

In his first address to the United Nations General Assembly in New York on September 19, Trump said: “We cannot let a murderous regime continue these destabilizing activities while building dangerous missiles, and we cannot abide by an agreement if it provides cover for the eventual construction of a nuclear program.”

He described the Iran nuclear deal as “one of the worst and most one-sided transactions the United States has ever entered into.”

“Frankly, that deal is an embarrassment to the United States, and I don’t think you’ve heard the last of it—believe me,” he added.

Trump administration officials say the nuclear deal does not address Iran’s missile program or its support for Houthi rebels in Yemen, Lebanon’s Hezbollah, and Bashar al-Assad’s regime in Syria.

Araud said that nothing in the nuclear deal prevents the P5+1 countries from raising these issues with Iran. In fact, he noted, France is doing just that.

Darroch admitted that the Trump administration’s tough stand has “changed the climate” on Iran. “It is succeeding. We would say, let’s intensify the discussions [on Iran’s other actions], but let’s keep the JCPOA,” he said.

Trump administration officials also object to parts of the nuclear deal that govern uranium enrichment and eventually expire under a “sunset clause” from 2025.

Even at this time, Araud said, Iran, as a member of the nuclear Non-Proliferation Treaty (NPT), will not have the right to have nuclear weapons and if it takes steps in this direction it will face tough sanctions. “We have rules,” he said.

“Decertification… is an American issue,” said Araud. “What matters for us will be the consequences of that… We are not going to criticize the president for certification or decertification. That’s your problem.”

“If the US will walk away from this agreement it would lose tools to monitor and inspect… and that would be a tremendous loss,” said Wittig.

Moreover, the German envoy said that walking away from the deal at this point would create the danger of Iran resuming its nuclear enrichment activities, a nuclear arms race in the region, and a weakening of the non-proliferation regime. Furthermore, he said, a collapse of the Iran deal would send a signal to North Korea—which has ratcheted up tensions on the Korean Peninsula with missile launches and a hydrogen bomb test—that diplomacy is unreliable.

“That would affect our credibility in the West when we are not honoring an agreement that Iran has not violated,” Wittig said.

Image: US Secretary of State Rex Tillerson (left) exited a meeting of the parties to the Iran nuclear deal at the United Nations headquarters in New York on September 20. (Reuters/Eduardo Munoz)