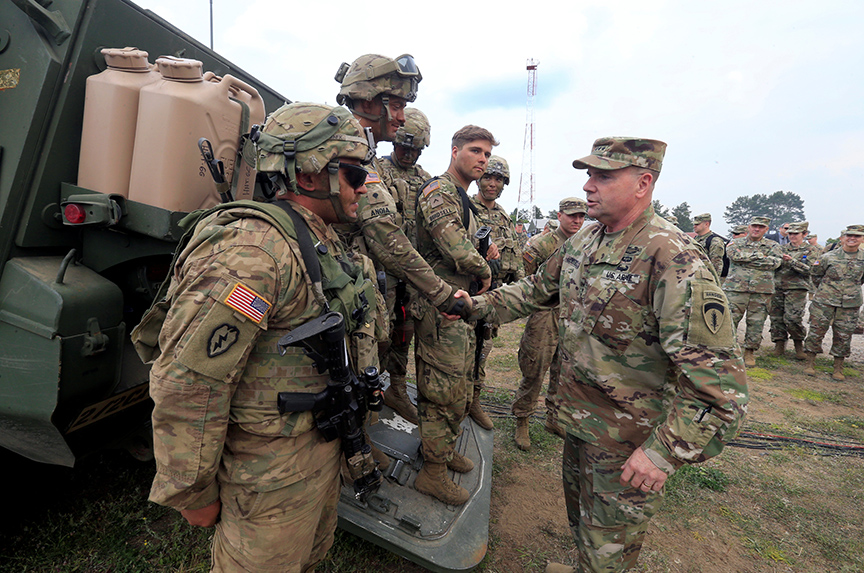 One word is dominating transatlantic security and defense discussions heading into September: Zapad. The word, which means “west” in Russian, is the name (and the target) of the Russian government’s regular military exercises, held every four years.

The top US military commander in Europe, Army Lt. Gen. Ben Hodges, shrugged when asked whether Zapad is a threat. “There’s nothing evil about Zapad,” he said, adding “It’s certainly Russia’s right to conduct exercises.”

This year’s series of drills, scheduled to begin on September 14, will be conducted in conjunction with Belarus. According to Moscow, Zapad 2017 will not exceed 13,000 troops, the level at which outside observers must be invited to monitor the exercises. NATO is deeply skeptical of this assurance, as estimates based on open-source information indicate the actual troop number could be as high as 100,000.

Still, Hodges isn’t rattled. “This is normal business as far as we’re concerned,” he said of the Russian exercises. “We’re always ready. That’s what we do. We prepare. We don’t need to have thousands of soldiers at the border standing guard.”

However, if he did have to move troops and their equipment quickly, Hodges would run into problems that have nothing to do with opponents, but rather with allies. He explained that a preponderance of national regulations exists that forces NATO troops to deal with extraordinary bureaucracy for permission to cross borders.

Hodges was incredulous that this remains an issue within the Schengen zone, an area comprised of twenty-two of the twenty-eight European Union states plus four other European governments which have agreed to forgo border formalities for people, money, and goods. However, those rules do not apply to militaries.

“There’s probably well over 100 different laws that would have to be changed in total in different countries from Germany, Poland, Lithuania, Romania,” Hodges explained. He has made it one of his many missions to urge political leaders to create what he calls a “military Schengen zone.” This would allow Allied militaries to move freely across borders within the zone, allowing for quick reactions to external threats.

Another point not to be overlooked or underestimated, Zapad 2013 took place just before Russia invaded and annexed Ukraine’s Crimea region. It was later concluded that Zapad was actually a warmup for the invasion.

Hodges says the real problem is “zero transparency” from the Kremlin. “I’ve never met in three years a single journalist who’s covered a Russian exercise—not one time,” he explained. “And that would really lower anxiety. So, if Russia was serious about wanting stability and security along their western border, they would invite journalists out there to demonstrate ‘hey, we’re just defensive.’”

Instead, Hodges pointed out, Russia has reassembled the World War II-era “1st Guards Tanks Army” comprising 800 tanks. “That’s not a defensive formation,” Hodges explained, “that formation exists for one reason: to attack. So, by doing that and by not being transparent, you can see why nations are anxious.”

Nonetheless, Hodges said NATO is not planning to make any major adjustments to its posture during the drills. One airborne battalion will be sent north to the Baltics for the duration just as a precaution.

“Ready” but for European roadblocks

One of the most shocking things Hodges said is that under current circumstances, he is not confident the regulatory red tape would be cut short even if there were a crisis prompting NATO to deploy its new high-speed, high-readiness spearhead force. “In Germany, for example, only the Bundestag [German parliament] can declare [something is] a crisis situation,” he explained. “The Bundestag would have to act to change the status so that we could move ammunition more quickly or move troops more quickly or to get access to Deutsche Bahn,” the German rail system, to move heavy equipment. He thinks NATO operations should be granted access to move their troops “within forty-eight hours,” for which there is no provision at present.

Hodges expressed disappointment that this will not happen on his watch; he is due to retire in September. “I have obviously not made a compelling case for why this is important,” he said.

Looking forward, however, Hodges noted that Dutch Defense Minister Jeanine Hennis-Plasschaert has formally raised the recommendation with NATO counterparts, and he hopes they will finally act. He has a pointed reminder for European governments: Russian President Vladimir Putin is not “burdened by any such restrictions.”