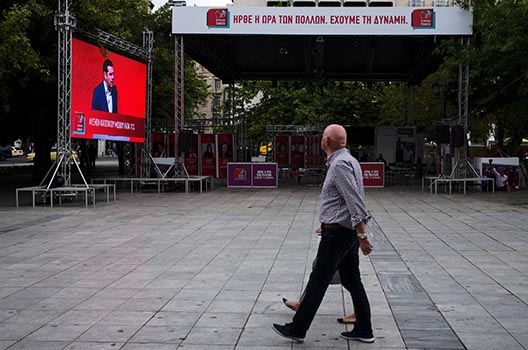 In Greece, European parliamentary elections on May 26 are being viewed as a litmus test ahead of national elections later this year. Domestic politics have dominated the debate and the opposition has framed the election as a referendum against the government. The fact that European elections are to be held at the same time as local elections for mayors and regional governors has further obscured European issues.

At the national level, the campaign has been polarized by high political drama and unrelenting personal attacks. This culminated in a vote of confidence in parliament, which Greek Prime Minister Alexis Tsipras won on May 10. In anticipation of national elections in October 2019, Tsipras’ governing Syriza party is playing its last political cards. On May 7, the prime minister announced new measures to ease the austerity policies favored by Greece’s creditors.  Meanwhile, the main opposition party, New Democracy, which is ahead in the polls for both European and national elections, has been asking for early national elections, accusing Tsipras of pandering to voters.

Syriza focused its European campaign message on shaping a better future for Europe. It has put together a progressive alliance against the forces of ultra-right populism and nationalism, which it argues includes New Democracy.

New Democracy has responded with an all-out attack against the government’s record, accusing Syriza of being the populist party that brought Greece to the brink of being kicked out of the Eurozone in 2015. New Democracy blames the government for delaying the end of the crisis by four years with its uncompromising stance which led to yet another bailout program, undermining democratic institutions, and inflaming national rifts.

Despite this heated political environment, significant change has occurred in Greek politics since the last European elections in 2014. Many observers tend to forget the upset of that election in Greece, when, in the midst of the Greek financial crisis and with New Democracy in power, Syriza finished in first place and the neo-Nazi Golden Dawn party rose to third place, sending its representatives to the European Parliament for the first time. This time, Syriza is no longer radical and a further rise of the far-right looks unlikely, contrary to what is taking place in other European countries.

Even as it focuses on the domestic political stakes, New Democracy has been reminding voters that it was the first pro-European party of Greece, while identifying with the agenda of its European political family, the European People’s Party (EPP). In fact, the EPP launched its European campaign from Athens, with its president, Manfred Weber, also receiving the support of New Democracy leader Kyriakos Mitsotakis for his candidacy for European Commission president.

Syriza now claims space in the European political center, having made “a systematic attempt to present itself as a social democratic, center-left party.” To that end, it is running with Democratic Alliance, a small centrist party which in 2014 had formed a progressive alliance with the social democrats of Kinima Allagis. While Syriza is currently a member of the European United Left-Nordic Green Left (GUE/NGL) pan-European political grouping, it has also been an observer at the Party of European Socialists (PES) meetings. These moves put it at odds with Kinima Allagis, which is a member and has historic ties with PES.

Even as Kinima Allagis accuses Syriza of opportunism and claims to be the original progressive party of Greece, it saw its base wither during the financial crisis. According to a European Parliament poll, the party is only projected to receive 7.2 percent of the vote. This may not be enough to bring it to third place ahead of Golden Dawn. Even though the latter’s base has shrunk, it is still projected to get 7.9 percent of the vote. On the contrary, the Communist Party is expected to gain a little, reaching 6.7 percent.

Polarization is expected to hurt the chances of the smaller parties. The former government coalition partner, Independent Greeks, and the River, a centrist party that won 6.6 percent of the vote in 2014, are not projected to reach the 5 percent threshold needed to be elected to the European Parliament. This is also the case for newcomers such as former Finance Minister Yanis Varoufakis’ DIEM25 movement.

Still, the prominence of domestic politics in the campaign suggests that Greece’s relations with the EU have normalized. Its position in the EU is no longer challenged by populists. In a way, these European elections may be seen as a win of sorts for Greece: overcoming the strains with its European partners, Greece is heading to its first European elections after the crisis with its biggest parties claiming not only to be pro-European, but also to be fighting populism—even as, for domestic political purposes, this translates into fighting each other.

Katerina Sokou is the Washington DC correspondent for “Kathimerini” Greek Daily and SKAI TV and a nonresident senior fellow at the Atlantic Council. Follow her on Twitter @KaterinaSokou.