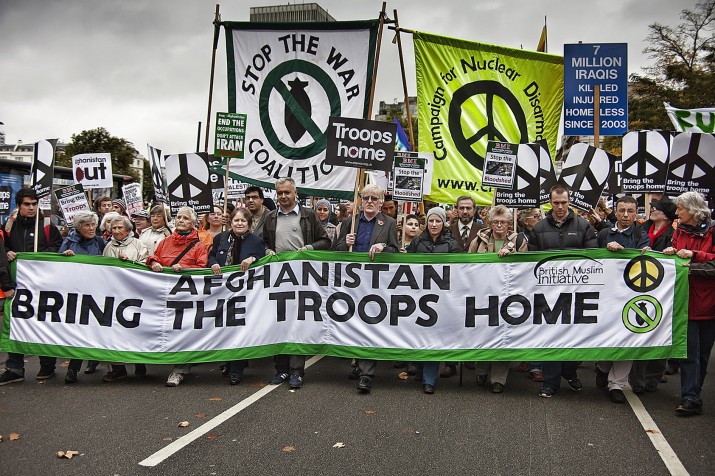 Across the pond, public support for NATO’s out-of-area adventure is cratering.

While 51 percent of Americans said they were confident that Afghanistan could be stabilised in the coming years, down from 56 percent in 2009, Europeans were far less upbeat with only 23 percent sharing that view.

The European figure, down from 32 percent last year, was based on an average of opinion polls in 11 European Union member states.

A European country-by-country breakdown showed a wide range of opinions — all relatively gloomy — with only 34 percent of Britons positive about the outlook in Afghanistan, against 18 percent in France and just 10 percent in Germany.

While 41 percent of Americans called for their troops to be withdrawn or reduced in Afghanistan, up from 30 percent last year, the European figure hit 64 percent, a rise from 57 percent.

This is why I’ve a sneaking suspicion U.S. based commentators like James Joyner are missing something when they write that recent European mutterings about not getting value for money spent out of NATO are just about bureaucratic top-heaviness. The words:

"The fat needs to be trimmed away, because we’re not in NATO as a job creation project. We are there to ensure that it delivers what we need in terms of our combined security."

Coming from the UK’s neocon-leaning Defense Minister, Liam Fox, should send shudders through the pro-NATO foreign policy community on the Western side of the Atlantic.

At the upcoming NATO summit in Lisbon scheduled for November, the U.S. Ambassador to NATO Ivo Daalder intends setting out a vision of an expeditionary alliance:

"This used to be an organization that was ready to react to an event that might occur, an attack on its territory. Now, this is an organization that is engaged in military operations almost as a matter of course. We have been involved since 1995 in various operations, first in the Balkans, and in the last six years, in Afghanistan. So there is a tempo and an activity that has changed this organization from a reactive… organization to a pro-active organization, building security. What we now need to see is a greater degree of reform to make it even more agile, more flexible, more pro-active than it has been in the past. And more capable of operating over great distances.

The Dutch have already proven that a NATO Charter call under Article 5 is not for "the course" and can be unilaterally withdrawan from, putting a stake through the heart of NATO’s very raison-de-etre. Daalder had to do some fancy wordsmithing in his interview with VOA to try (and fail) to conceal the fact:

"NATO as an organization and the individual countries that are part of it… is fully and completely committed to this operation. The Dutch decision to withdraw was made something that was made more than two and one-half years ago, when the Dutch decided to stay for another two years.  It is not a decision that has anything to do with current events… The same is true for other countries that may have committed a long time ago to ending their particular operations."

European popular antipathy to the Afghanistan occupation will further sour their leadership to any expansion of NATO’s remit as an "out-of-area" force. I don’t think the U.S. is going to be happy with European resistance to the idea of an expeditionary NATO which will essentially be an adjunct to U.S. interventionist foreign policies. Perhaps especially if Europeans thought that interventionism was to be aimed at Iran.

Views on Iran also differed sharply on the two sides of the Atlantic.

…Few respondents favoured a military strike against Tehran at this stage, but given an ultimatum between a nuclear-armed Iran and military action, those surveyed showed a wide spectrum of opinions.

And, after all, although it has been languishing so far the Europeans have their own alternative security organisation waiting in the wings which could be brought forward again, the EDF, which would have a purely defensive remit more in keeping with their voters’ wishes.

Steve Hynd is an expat Scotsman living in the USA who blogs under the pseudonym Cernig. This article was riginally published at Newhoggers.