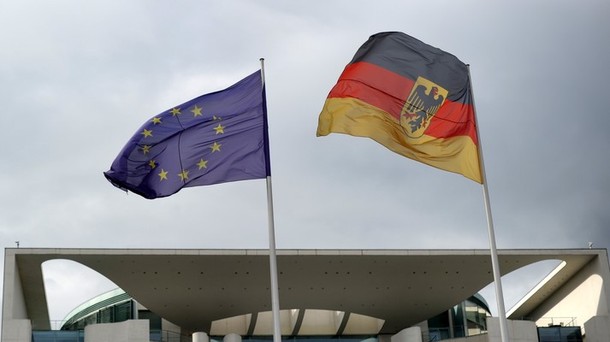 Almost sixty years ago to the day, the European Defense Community (EDC) Treaty was signed in Paris. Under pressure from an America facing a possible war on two fronts – Korea and Europe, the aim was to create a European Army that would see West Germany re-armed to provide manpower for the defense of Europe only twelve years after Nazi troops had marched down the Champs Élysée.

The French agreed but only on the condition that German forces were subsumed into a supranational European military force. In a moment of prescience Winston Churchill said of Britain, “we are with them, but not of them”. Nothing changes. In essence the EDC concerned the German question – how to constrain German power and to reassure France. Nothing indeed changes.

The durability of this question was brought home to me during my time at the EU Institute for Security Studies in Paris over a decade ago. The many meetings and conferences I attended on ‘project Europe’ all had the same sub-plot, French elite concerns about Germany and its power, matched only by German elite concerns about Germany and its power. For many years, German guilt and French fear was enough to fashion a sort of balance of power. No more.

The late 1980s saw two things happen that would lead us all to the precipice over which we are now staring. German war guilt began to wear off just as German re-unification began to push Germany to the fore. Both French Socialist President Francois Mitterand and British Conservative Prime Minister Margaret Thatcher saw the danger and were profoundly concerned about the power and influence of a united Germany especially given the pending collapse of the Soviet Union.

Typically, Mitterand and Thatcher chose radically different paths. Prime Minister Thatcher sought strategic separateness from Europe and a close relationship with the United States. President Mitterand believed the only way to constrain Germany was via European integration. This was to be achieved first by monetary union, which had first been dreamed up back in the late 1960s, and ultimately political union. The 1991 Maastricht Treaty was meant to see the launch of this grand French plan and the drive towards political union without which monetary union would not only be difficult, but downright dangerous. In then German Chancellor Helmut Kohl Mitterand found an unlikely conservative ally.

However, the French and German elites engineering this great experiment in sovereignty faced three profound dilemmas. First, many ordinary Europeans remained utterly wedded to national identity, not least the French. Second, with the end of the Cold War the moral imperative to extend the EU to the east was enormous, even though ‘widening’ undermined ‘deepening’. Third, Germany championed ‘integration’ but refused to pay for it, just as today. As another senior German said to me at the time, “Germany does not really understand the meaning of solidarity”.

The British response as per usual was utterly idiosyncratic. London said that under no circumstances would it give up national sovereignty and then promptly did so as successive British governments transferred power to Brussels without any semblance of permission from the British people. Today, Britain is in the worst of all Euro-worlds – obligation without influence. Indeed, Europe has rendered the British state virtually powerless to control even its own borders with the possible secession of Scotland pointing to a United Kingdom of little utility nor advantage.

2005 was the moment the slow landslide began towards today’s uber-crisis. French, Dutch, and other voters rejected the proposed Constitutional Treaty that would have established the ‘ever closer union’ that may (just may) have led to effective governance of the single currency. Today, Europe is split in two between southern and eastern Europeans who see ‘Europe’ as a metaphor for wealth transfers from the still reasonably and temporarily rich northern and western Europeans; and German, Dutch and other taxpayers determined to resist what they see as a money grab by the structurally inefficient south and east. Under President Hollande France sits uncomfortably between the two camps.

Beyond possible currency collapse the failure to answer the German question sees Europe today faced with the two great dangers of this European age born of the past; the twinned democracy and sovereignty deficits. Neither the EU nor the EU member-states have the power any longer to act decisively. The capacity to act has been lost down the political black hole that is Brussels. This exacerbates a popular and utterly justifiable impression on the part of the European peoples of a self-serving and incompetent Euro-elite over whom there is little effective political oversight.

There is of course an historical irony to all of this. In 1954 the EDC Treaty failed because France killed it. It was a sovereignty step too far. There is no reason to believe that today would be any different.

Sixty years on history remains as eloquent as ever in Europe and there is still no answer to the German question…simply a new question; empire, union or nothing.