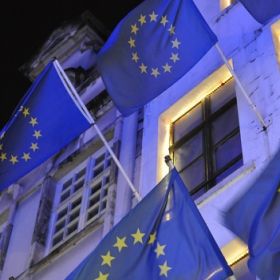 For decades, European Union nations have walked a constitutional tightrope, refusing to make the ultimate choice between their core sovereignty and the merging of powers necessary to construct a viable European polity. The recent financial hurricane unleashed by the dangerous combination of poor regulation, too much debt, and weak leadership has brought Europe’s constitutional balancing act to an end. European nations and leaders have an important choice to make about the future of the eurozone, and the decision window is closing rapidly.

Europe has options. It can continue to muddle through and govern crisis to crisis. It can force the exit of problematic periphery states. It can yield to the power of the markets, accept a serious economic disruption of monetary union, and thereby resurrect the nationalist dynamics that consumed Europe until 1945. Or, Europe can assume control and initiate a courageous leap forward into a further integrated eurozone. Seemingly, the option to move forward with ambitious increased economic and political integration gives Europe the best chance at economic and political success.

The escalation of the recent crisis showed that previously failed strategies were based on a false diagnosis of the problem source. The crisis was not a crisis of the euro. The euro has proven to be a stable currency. Nor was the crisis a debt crisis specific to Europe. Compared with the US and Japan, the EU has the lowest level of debt of all three economic regions.

The crisis was a crisis of refinancing within the eurozone, and is primarily due to an inadequate institutional foundation of the common currency. Given that this understanding of the core issues of the eurozone demonstrates a need to depart from previous strategies, the option to muddle through with the single market in its current form should be taken of the table.

Similarly, the options of dissolving the euro, or removing specific states, should be taken off the table as both would result in severe consequences for the continent moving forward. Formally, the EU would likely survive. Secession, a legally feasible option now that the Lisbon Treaty is in force, would remain an unappealing option for most EU member states given a return to national currencies across the EU would expose each individual country to the unpredictable fluctuations of highly speculative foreign exchange markets. While the departure of small states such as Greece, by force or choice, may be economically and politically manageable, the free trade of goods within the single market may not survive the hostile political atmosphere that would follow a larger breakup of the eurozone.

Additionally, if the eurozone were to disintegrate, a fierce national blame-game would consume European politics for at least a decade. It is thus hard to imagine how remaining European policy endeavors would continue to persist amicably. Further, it can be argued that Europe would lose its role as a globally relevant power as the continent’s credibility on the world stage would be destroyed for the foreseeable future.

Due to the changing global environment, only the option of a more integrated Europe can address the challenges facing the eurozone, and its member states, and sustain a common currency without the need for an unending series of bailouts.

This means, however, that a transfer of sovereignty to European institutions is unavoidable in order to impose effective fiscal regulation, guarantee a stable financial system, and simultaneously promote convergence of financial, economic and social policies in member countries. These institutions must minimize the risk of future economic crises and refrain from adopting politically unsustainable forms of austerity when crises do hit.

Further, these institutions must offer the EU countries that are worst hit a viable path to economic stability while assuring stronger states that they will not be asked to bail out weaker states forever. Potentially under such a scenario, countries with budget surpluses would transfer funds to the countries running budget and trade deficits. In exchange for these transfers, the European Commission would reserve the authority to review national budgets and force countries to adopt policies that would reduce their fiscal deficits, increase their growth, and raise their international competitiveness.

As the reasoning for European monetary union is both political and economic, the path forward must address both aspects. What makes the most sense economically is not always the correct political choice, and vice versa. Therefore, further economic and political integration needs to be seriously considered in order to avoid both a return to monetary nationalism and a permanent euro crisis. Europe must do now what it failed to do at the time of the euro’s launch: Begin the process of moving towards a more integrated economic and political union.