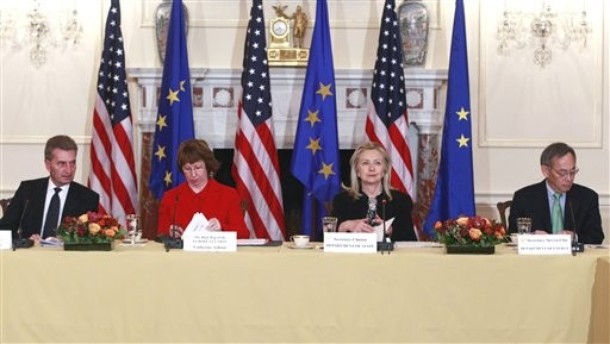 Overshadowed by the frantic negotiations to save the Euro-zone, but in many ways no less important, high-level EU and US representatives met in Washington DC at the end of last month to midwife still nascent official cooperation on energy policy between the transatlantic partners.

The importance of these talks for the post-economic crisis world is difficult to overstate. The EU-US Energy Council, as the formal coordination mechanism is called, will likely set the standard for the developed world in working towards greater energy security, harnessing new energy technologies, and addressing environmental concerns. This is why US Secretaries of State and Energy, Hillary Clinton and Stephen Chu led the recent talks together with EU High Representative Catherine Ashton and Energy Commissioner Gunther Oettinger.

Importantly, unlike the recent Durban climate change conference and the almost simultaneous World Petroleum Congress in Doha, the EU-US Energy Council has since its inception two years ago made a point of addressing global energy issues holistically. Its numerous expert working groups bring together the foremost policymakers and technical specialists on both sides of the Atlantic to tackle thorny yet consequential energy topics of the future, such as joint energy efficiency standards, carbon capture and storage, smart grids, electric vehicles and nuclear safety.

The Council has also emerged as a forum for the tough diplomatic negotiations that characterize energy geopolitics across Eurasia, from Ukraine’s accession to the Energy Community to the building of the Southern Gas Corridor from Southeastern Europe to the Caspian Sea. This meeting also launched a ‘Trilateral Critical Materials Initiative’, a partnership with Japan that will only enhance the Council’s role as the developed world’s guide for future energy policy.

All in all the Council should be applauded as a transatlantic talking shop practicing real forward thinking and achieving genuine coordination. But, in perhaps the most important energy issue in need of EU-US accord, it has unfortunately erred on the side of caution. In the joint press statement from the most recent meeting, many of the topics discussed above received major attention. But, buried amongst the others in a short paragraph was a statement of intention to continue dialogue about global natural gas markets, particularly unconventional gas.

It is no secret that the natural gas revolution in the United States has not been met with similar enthusiasm in Europe. France has all but banned unconventional gas development on its territory and other EU heavyweights are contemplating similar restrictions. The EU’s Energy Commissioner has pointedly avoided discussion about unconventional – often summarized as ‘shale gas’ – potential across the European continent largely because of very loud protests by environmental protection groups, seizing on a new technology as the next corporate energy evil to be combated.

But in world in which top energy companies are forecasting that natural gas will overtake coal to become the world’s number two fuel source in 2025, it seems evasive of the EU-US Energy Council not to tackle the transatlantic dispute over unconventional gas head-on. After all, transatlantic energy coordination is presumably about addressing the difficult issues alongside the ones everyone can agree on.

There are legitimate concerns about shale gas. In early December, the US Environmental Protection Agency drew a direct link between drinking water contamination and shale gas wells. But, many technical experts insist that with proper safeguards, unconventional gas development can be safe, cost effective and a major contributor to energy security. If configured correctly, an intra-EU explosion of natural gas development, similar to what has been occurring in the US in the past few years, could not only drastically reduce dangerous dependence on Russian resources, but also aid in meeting 2020 carbon emission goals.

Whether or not this occurs, a future scenario in which the US serves as a global evangelist for unconventional gas development while the EU emerges as its foremost critic, is one that would overshadow all of the other accomplishments in transatlantic energy policy coordination. Surely, the primary purpose of the EU-US Energy Council should be to make sure that such as scenario never takes place.

Alexandros Petersen is advisor to the European Energy Security Initiative (EESI) at the Woodrow Wilson International Center for Scholars in Washington DC.