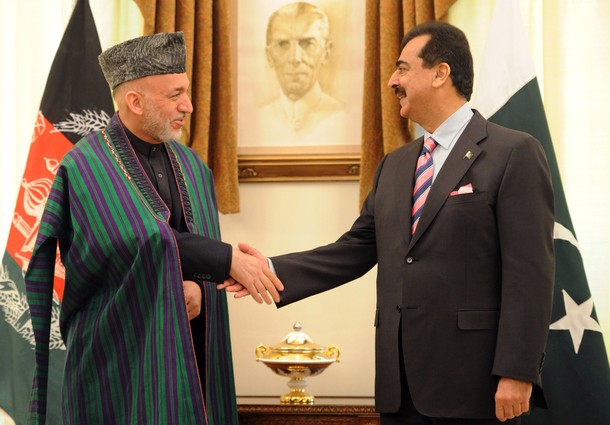 Now that the dust has settled on the Chicago Summit, it might be time to see what truly emerged from all the noise and celebration about the cooperation among NATO allies and with Afghanistan. One issue got lost in that hoopla: Afghanistan’s regional context.

As NATO troops come home, a diplomatic strategy for the region must be put into place. It isn’t a stable Afghanistan that is key to generating regional stability and prosperity — rather, the opposite is true: if the region cooperates to maintain wider stability, then Afghanistan stands a better chance of becoming stable and prosperous.

Interestingly, even the Chinese seem to have understood this issue. According to a Reuters report out of the recent Shanghai Cooperation Organization summit, President Hu Jintao told the official People’s Daily, “We will continue to manage regional affairs by ourselves, guarding against shocks from turbulence outside the region, and will play a bigger role in Afghanistan’s peaceful reconstruction.” He added: “We’ll strengthen communication, coordination and cooperation in dealing with major international and regional issues.”

The best path to Afghan self-sufficiency is to work with Afghanistan’s neighbors near and far to ensure that Afghanistan’s economy can develop via trade and investment. That is the most effective and sustainable method of weaning Afghanistan away from U.S. and European assistance beyond 2014. Last week’s regional “Heart of Asia” conference, hosted by President Hamid Karzai in Kabul, was a modest step forward in the process.

U.S. support for such efforts would advance what is now a regional trend. Already India has invested more than $1.2 billion in Afghanistan. Pakistan, too, has sent economic aid and supplies, as has Iran. China and India have both invested in the mineral sector. Trade between South Asia and Afghanistan, and through Afghanistan with Central Asia and Iran, would provide much-needed revenue and facilitate direct investment in Afghanistan.

Pakistan remains key to these endeavors. A stable Pakistan that has normalized its relationship with India would find common ground in Afghanistan rather than fear being bracketed by a hostile India in Afghanistan. It could partner with India in opening up gas and hydroelectricity links to Central Asia and even invest in joint exploitation of the Kabul River gorge for producing electricity that both Afghanistan and Pakistan badly need. A secure western border with Afghanistan would allow Pakistan to combat the so-called U-turn trade with Afghanistan that deprives it of some $2 billion in taxes each year, where duty-free goods imported into Afghanistan are smuggled back into Pakistan.

The United States need not take the lead in underwriting Afghan stability post-2014. But it can achieve that objective by acting as a facilitator, bringing neighboring countries of the region together and using its clout in the international financial institutions, such as the International Monetary Fund, the World Bank and the Asian Development Bank, to direct aid to support regional trade and development efforts.

Revival of the Turkmenistan-Afghanistan-Pakistan-India (TAPI) oil-and-gas pipeline could also be a boon to the region. The Asian Development Bank has already done much of the groundwork on the TAPI pipeline. And, as the United States brings Iran into talks on Afghanistan’s future, it might find it possible to ease up on sanctions enough to allow India and Pakistan to benefit from Iranian gas and oil rather than making it a hindrance to relations with these important South Asian partners.

Crafting a sustainable policy toward Afghanistan and its surrounding region requires less emphasis on “architecture” and more on longer-term relationships. With elections looming in the United States, Afghanistan, Pakistan, Iran and India, and a changing of the Politburo in China later this year, the danger is that short-term actions fueled by domestic considerations could derail long-term actions and relationships. The United States must remain engaged with all countries in the region surrounding Afghanistan and bring its powerful business community into its efforts to create a network of investments in the region as a whole. This approach would tie the economies of South Asia with Afghanistan and Central Asia and thus help create stability over the longer run.

Shuja Nawaz is director of the South Asia Center at the Atlantic Council in Washington, D.C. Abigail Friedman is former Director for Afghanistan at the National Security Council in the White House and a Foreign Service Officer with the Department of State. This post originally appeared in The Hill. Photo Credit: Getty Images