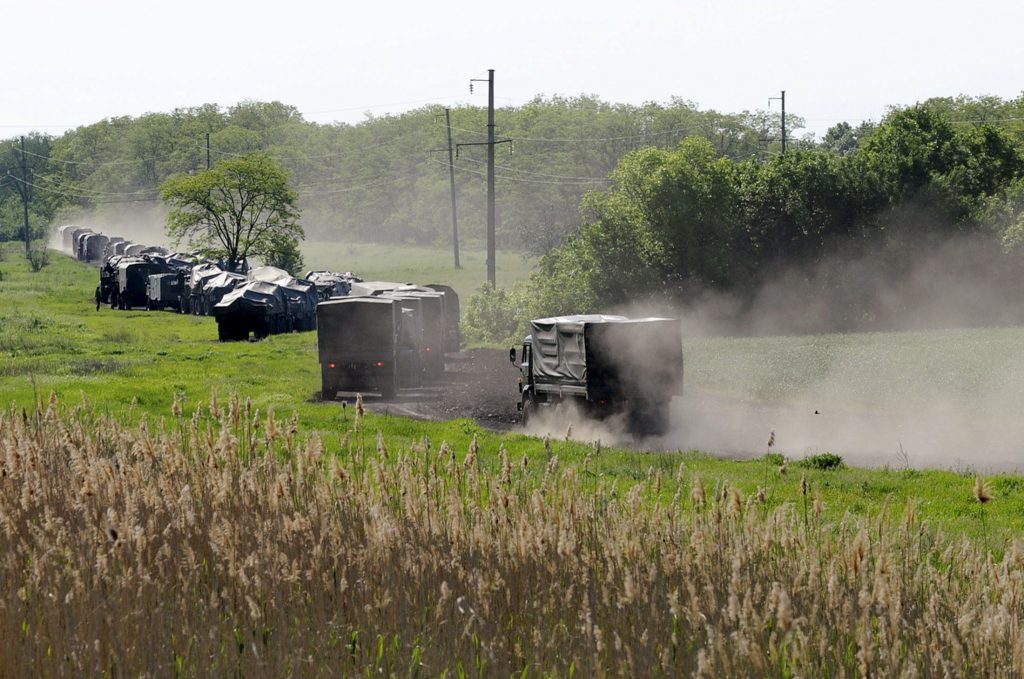 Military vehicles drive along a road in the southern Russian town of Matveev Kurgan near the Russian-Ukrainian border May 24. The convoy of dozens of Russian military vehicles, including Uragan multiple rocket launchers, military trucks without license plates, and armored personnel carriers, crossed Matveyev Kurgan May 24 and turned to the fields from the road near the border with Ukraine, according to a Reuters journalist. (Reuters)

“I can tell you outright and unequivocally that there are no Russian troops in Ukraine,” Russian President Vladimir Putin declared on a live television show April 16.

That claim was patently false. To put it bluntly: Mr. Putin was lying through his teeth.

The conflict in Ukraine’s east is a Kremlin-manufactured war, begun by Russian officials, fought by Russian soldiers, fueled by Russian equipment, and supported by artillery strikes from Russian territory. The evidence is literally hiding in plain sight.

The Atlantic Council’s new report, “Hiding in Plain Sight: Putin’s War in Ukraine,” cuts through the Kremlin’s fog of lies and presents the facts on the ground through the eyes of average Ukrainians and Russians, including Russian soldiers themselves.

Misinformation is a key ingredient in Putin’s war in Ukraine. And the Kremlin’s propaganda has consequences.

At home, the environment Putin has created condones, if not encourages, violence against anyone bold enough to criticize the Kremlin. One brave soul, Boris Nemtsov, paid the ultimate price. Abroad, Putin’s propaganda sows confusion, encouraging or justifying ambivalence in the West’s response to the conflict.

The truth is the best antidote for misinformation. That’s why it’s so important for Western leaders to counter Russia’s hybrid war with clear language, calling a spade a spade, rather than abet the Kremlin’s strategy with silence and equivocation.

The conflict in Ukraine is not a civil war, as Putin would like to have the world believe.

Rather, it’s a story of Russian soldiers, ordered by their commanders to remove insignia that would link them to Russia and backed by a steady flow of arms and equipment, taking an active role in the war against Ukrainian forces.

Indeed, Russian forces have played defining roles at key moments throughout the conflict, beginning with the invasion and annexation of Crimea and the initial violent rebellion in Slovyansk.

By mid-June of 2014, however, the war started to turn in Ukraine’s favor. Russia responded by pouring in sophisticated artillery, tanks, anti-aircraft missiles, including the Buk surface-to-air missile system that was used from Russian-controlled Ukrainian territory to shoot down Malaysia Airlines Flight 17 on July 17.

And when in mid-August, Ukrainian forces were on the verge of encircling ever-smaller enclaves in Donestk and Luhansk, Russia sent in thousands of regular army troops overwhelming the Ukrainians.

To this day, Russian citizens and soldiers are fighting and dying in a war of their government’s own making.

Our report is based on open source information—all unclassified material, none of which is provided by government sources—that has been collated by our team and deciphered using the social media forensics and geolocation expertise pioneered by British investigative journalist and our co-author Eliot Higgins.

Social media forensics and geolocation analysis are powerful tools: information once available only to intelligence agencies is now there for all to see. This helps overcome differences on intelligence assessments, as we’ve seen within NATO, as well as the healthy skepticism among the public of official intelligence given failures in the past, particularly claims of WMD in Iraq.

We produced this report for another more compelling reason: If the international community cannot distinguish fact from fiction, or chooses not to do so in public, it is unlikely to coalesce around an effective strategy to support Ukraine and deter Putin.

We hope our report will inform policy decisions, beginning with ending any talk about curtailing sanctions on Russia, but also galvanizing a more comprehensive transatlantic strategy to deter Russia’s aggressive actions.

Our report also serves as a warning: Putin is laying the groundwork for the next phase of conflict in Ukraine. By creating a separate fighting force, he is determined to make the case that the conflict has become a civil war regardless of its origins and that the separatists should enjoy the same legitimacy as Ukraine’s elected leaders. We must not fall into that trap.

Russia’s hybrid war is not limited to Ukraine. Its impact is being felt across Europe and Eurasia. Most worryingly, the Kremlin has used propaganda, misinformation, and hybrid tactics to undermine neighbors such as Moldova, Georgia, and Kazakhstan, and prevent their westward move.

And, most dangerously, Putin has sought to divide NATO and the European Union by exploiting divisions within and among nations. His ultimate goal may be to undermine the solidarity of our alliance.

Putin has used the Ukraine crisis first and foremost to consolidate his own authority at home, whipping up patriotic sentiment to paper over the Kremlin’s own failures in governance. Unmasking this deception must be a key element of a strategy to end his aggression by hitting back where he is vulnerable.

We must show solidarity with those Russians who are courageous enough to take a stand against the Kremlin’s lies.

Nemtsov’s assassination may well be a result of his own investigation into Russia’s military aggression in Ukraine. His death is a stark reminder that Putin’s first victims are the people of Russia, who deserve so much better.

For so long, many of us have worked together toward a Europe whole and free in which a democratic Russia would find its rightful, peaceful place. While that goal remains further away today than it was a few years ago, it remains a compelling vision for the future.