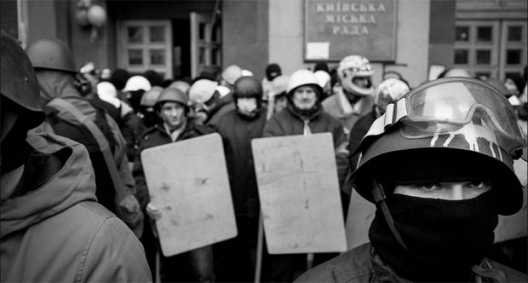 Just when it seemed that Ukraine was lurching toward an all-out civil war that could have spilt the country between a Russophone east and south and a Europe-oriented center and west, feverish mediation by the foreign ministers of Germany, France and Poland has led to a deal between the embattled regime of President Viktor Yanukovych and the opposition. With Yanukovych removed from power and elections set for May, it’s important to step back and assess a few of the key lessons from the Ukrainian revolution of 2014.

The first lesson offered by this drama is that Viktor Yanukovych was his own worst enemy. By entering into negotiations with the European Union on an Association Agreement (AA) he stoked popular expectations — which ran particularly high in central and the western part of the country — that Ukraine would start the process of integrating with Europe and perhaps one day enter the EU. Then, last November, Yanukovych shelved the AA, settling instead the following month for a $15 billion dollar credit line from Russia and a promise of Russian natural gas at a steep discount. This soon brought the crowds onto the streets of Kiev and other cities, initiating the chain of events that culminated in his downfall.

Yanukovych erroneously believed that he had played Europe off against Russia and received a bailout for debt-ridden Ukraine that did not require reforms that would have undermined his pervasively corrupt regime. The demonstrators, however, refused to be cowed and showed tenacity and organizational acumen, in the dead of winter no less. The death of the first protester galvanized them and soon it was clear that Yanukovych couldn’t rebottle the genie of revolution. If he expected some form of Russian intervention, he miscalculated.

Another lesson is that Putin miscalculated as well. When he offered Yanukovych the mega-bailout and cheaper gas he had assumed that he’d outfoxed the EU and the U.S. Yes, his gambit was an expensive one, but Ukraine — the cradle of Russian Orthodox Christianity, a country of 45 million people with a substantial Russian (or Russified) population, and the second most populous Slavic country in the world — was too big a prize to lose. But Putin underestimated the passion propelling pro-Europe Ukrainians and overestimated the efficacy of coercion, which he has wielded so effectively at home. Even if the Sochi Olympics hadn’t hampered him, it’s not clear that he could have rolled back the revolution. Ukraine is not Georgia, and a Russian military intervention would have been a recipe for strategic indigestion. It would also have taken Russia’s relationship with Europe and the United States to an unprecedented low.

The third lesson is that Russia has suffered a big setback. Moscow has always had a different perspective on the Ukrainian crisis than the one prevalent in the Western press, which has presented Ukrainians as Pro-European freedom fighters. As Putin and many others in Russia see it, the anti-Yanukovych uprising was a Western-backed coup against an elected government. As protesters occupied government buildings and clashed with police, media coverage and official statements in Russia highlighted the right-wing nationalists (in particular the Svoboda party), pouring scorn on the protesters’ calls for democracy, and likening them to hooligans, anti-Semites and neo-Nazis.

Moscow will emerge from this crisis even more convinced that the West’s goal is to foment revolutions in its neighborhood — and in Russia itself. President Obama’s ‘reset’ policy to improve U.S.-Russian relations is a shambles. Expect cooperation with Russia on Syria, Iran, North Korea and arms control to get even tougher. Expect, as well, that the Kremlin will be even more combative over Western criticisms of Russia’s democracy deficit. The anti-Western nationalism evident in Russian politics will become sharper, as Putin will likely jump at every opportunity to trip up President Obama.

Fourth lesson: Europe produced the deal and America’s contribution was secondary. The solipsistic salespeople of America as the ‘indispensable nation’ will deny this, pointing to various things Washington did to midwife the accord. But what will be remembered from Ukraine’s latest revolution, aside from Europe’s leading role, is that American diplomacy was not just peripheral but at times even inept. Victoria Nuland, assistant secretary of state for European and Eurasian affairs and a seasoned diplomat, made the amateurish mistake of discussing with the American ambassador to Ukraine, over an open phone line, who should and should not be in a post-Yanukovych government. Nuland’s blunder — which, for good measure, included an expletive directed at the EU — simply lent credibility to Putin’s conspiratorial narrative, while also angering German Chancellor Angela Merkel, who had already been seething over revelations that the National Security Agency had been tapping her cellphone.

The final lesson is for the Ukrainian opposition. Its leading lights will soon be part of the government and become responsible for balancing the budget, securing reliable and affordable energy and enacting much-needed reforms that will inevitably bring even greater hardship to many Ukrainians who depend on state subsidies for basic necessities. The masses that flocked to the Maidan to hear the orations of the revolution’s leaders will soon come to look at them differently. The imbalance between popular expectations and the government’s capacity to meet them will soon become apparent. Yanukovych has bequeathed an economic mess of immense magnitude to his successor, who had better hope that the EU and the U.S., having cheered for the revolution, will now back up that adulation with aid.

The opposition faces a couple of other challenges. The imperative of vanquishing Yanukovych united its leaders, but that glue will soon dissolve, and avoiding the missteps of the 2004 Orange Revolution — bickering, backbiting and squandered opportunities — will be crucial.

The other challenge will be to hold Ukraine together. While it’s incorrect to claim that this revolution had legs only in central and western Ukraine, there’s no denying that that was largely the case. Tepidity, even hostility, toward the EU and affinity for Russia increase as one moves from central Ukraine toward the south and east. The people of the Donbas, as the latter part of Ukraine is called, will be leery of the new management. And if there’s one thing Ukrainians have shown in recent years, and on more than once occasion, it is that they have the capacity and courage to turn their disaffection into rebellion.