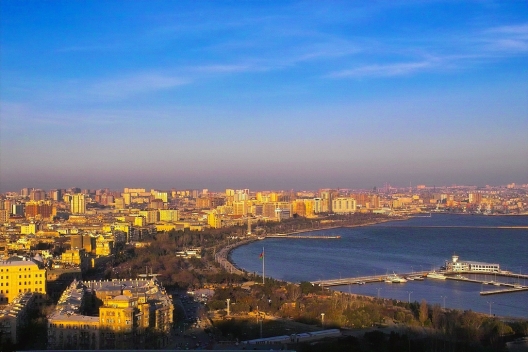 President Ilham Aliyev is about to start his third mandate in Azerbaijan. Despite some hefty criticism by the main European elections observation mission, the Organization for Security and Cooperation in Europe (OSCE), the elections on 9 October were the easy part. Azerbaijan has made impressive economic progress in recent years, Baku’s sparking skyline standing as vivid proof. But the country has a host of challenges to overcome. Economic growth has already begun to slow and during his next mandate Aliyev will have to manage a transition from mega-oil producer to a more diversified and democratized country.

Over the past ten years high oil revenues brought Azerbaijan stunning GDP growth, impressive poverty reduction, some development in non-oil sectors and allowed it to become a major international investor in its neighborhood.

The country’s role on the international stage has noticeably increased, after Eurovision 2012 it will host the European Games in 2015. More importantly it gained a seat on the United Nations Security Council as a non-permanent member and has succeeded in maintaining an independent multi-vector foreign policy where it is beholden to none of its bigger regional neighbors – neither Russia nor the European Union and the United States. Late last year it even marshaled the closure of Russia’s last military outpost on its territory at the Gabala satellite station.

Trouble, however, lurks on the horizon. Gone are the days of double digit growth rates, in 2012 the economy expanded by 2.2 percent and may reach 6 percent this year. The country’s oil revenue has started to decline and is predicted to decrease quickly after 2015. New natural gas fields coming on line are unlikely to compensate fully the lost oil revenues. Azerbaijan is also not the only gas provider in the area, with Iraq, Iran, Israel and even tiny Cyprus as potential new European suppliers, and new extraction technics being developed.

Diversification of the economy has begun but in 2012 92% of exports were still oil or oil products. Substantial more investment and human capital is needed to offer goods and services that can be competitive in an already saturated region soon to be divided up by rivaling trading groups led by the EU or Russia’s custom union.

While it was easy for a small group of individuals and companies to manage oil extraction and export, with the vast majority of profits going to a limited few, this will no longer be possible under a more diversified economy and as growth rates drop.

Already there were public protests in 2012 and 2013, indicating growing discontent with social inequality, corruption, lack of opportunities in the regions and hazing in the military. Even though the demonstrations quickly ended in mass detentions, the whole idea of street action was striking for officials and the population with both sides testing the boundaries of the allowed and possible – often employing the new tools of social media.

The most common way to respond to public expressions of criticism has been repression including the jailing of activists, political arty representatives and journalists. But the President also fired several regional executive authorities who had too clearly flaunted their wealth and privileges.  While it may be hard to dismiss close long term allies in government in Baku, some who are from Ilham Aliyev’s father’s generation, more anti-corruption efforts at the municipal and regional level could already diminish some of the current unhappiness not so far from Baku’s bustling Fountain Square.

Another less vivid, but nevertheless serious challenge for the current government, is the growing influence of more conservative forms of Islam – either sunni or shiite. Positioning itself as a secular country, Azerbaijan with its predominantly Muslim population has a new generation of believers who are very active. The government is worried that they may be manipulated by a hyper active Shiite state on its Southern border and a Salafi insurgency ragging on its Northern flank with the North Caucasus.

To counter this, the government introduced strict and restrictive religion laws in November 2011, an informal Hijab ban and the closure of a number of mosques. These in turn have angered many and are unlikely to encourage people to more moderate religious practice. Instead some Islamist groups have joined opposition rallies or mobilized people, like in October 2012 to protest the hijab ban. Instead the government should make the work of the State Committee for Work with Religious Organizations (SCWRO) and the Caucasus Board of Muslims (CBM) more transparent and enter into a dialogue with peaceful practitioners and representatives of non-official Islamic communities.

Systematic human rights abuses and absence of progress in the democratization has been reported extensively on by groups like Human Rights Watch and Amnesty International. The just completed presidential elections were more harshly criticized than the last two presidential polls which Aliyev won. According to the OSCE the election were “undermined by limitations on the freedoms of expression, assembly, and association that did not guarantee a level playing field for candidates.”

In the past human rights concerns have done little to taint most western countries’ relations with Baku. Even during this election the European Parliament and Parliamentary Assembly of the Council of Europe (PACE) came out with much more encouraging statements on the holding of the poll. But Azerbaijan’s ties with its western allies are on less solid ground than before. Baku is not planning to sign a trade agreement with Brussels in Vilnus (because it is not a World Trade Organization member) nor move forward in the association process as Georgia, Moldova and Ukraine expect to do. As the country is les needed as a corridor for the US supplying or withdrawing from Afghanistan, Washington’s interest in the region is likely to keep decreasing.

As President Aliyev likes to repeat, the biggest challenge facing the country is the non-resolution of the Nagorno-Karabakh conflict. The current status quo is deeply damaging: 586,000 Azeri remain internally displaced (IDPs) from Nagorno-Karabakh and adjacent areas, and some 14 per cent of the country’s territory is occupied. In response Baku has been accumulating military assets at an increasing rate: the military budget rising to $3.7 billion in 2013, from $3 billion in 2012. Public opinion in Azerbaijan and Armenia, encouraged by the arm race and provoked regularly by official and unofficial propaganda, is turning increasingly against any compromise.

An open war, however, would have disastrous consequences for both countries and the region. Now that Armenia has agreed to join the Eurasia customs union it is more apparent than ever that Russia would have much difficulty to let its partner’s territory be attacked from the Azerbaijani side.

The chance of war increases as long as negotiations between Armenia and Azerbaijan remain stalled. For twenty years the Organization for Security and Cooperation in Europe (OSCE)’s Minsk Group has tried to mediate a resolution of the conflict. Since 2005 it attempted to get the sides to at least agree on six basic principles to guide a comprehensive agreement. The effort has now virtually collapsed and the best the mediators appear able to do is engage the parties on confidence building measures like the pulling back of snipers or the setting up of communication lines to inform about incidents along the line of contact. Azerbaijan has refused to sign on to them claiming that they strengthen the status quo.

But Aliyev has shown some courage in the past by calling for progress, saying that he could contemplate a vote on the future status of Nagorno-Karabakh and urging for discussion on a comprehensive settlement to begin. He could demonstrate real commitment to these proposals by agreeing to the confidence building measures being suggested by Minsk Group negotiators. Already he has toned down some of his most belligerent rhetoric. The resolution of the conflict is deeply dependent on confidence building and the next needed step is a beginning of withdrawal of occupied territories by Armenian forces but they are not willing to do this until they see strong security guarantees being implemented.

Nobody seriously doubted Aliyev’s electoral victory but the situation is different from previous elections because of the seriousness of the challenges ahead. Luckily Azerbaijan has a large number of young, foreign educated, and patriotic youth to help in the transition process if they are encouraged, rather than imprisoned or harassed for any expression of dissent.

The President has declared an ambition for Azerbaijan in 2020 – and he’s not the only regional leader who has aspirations for his country’s next decade – but if he wants to get there, it’s not too early to start reforms which his western partners will support, rather than to isolate further, keeping the economy based on a handful of commodities and the business of running the country in a few hands.