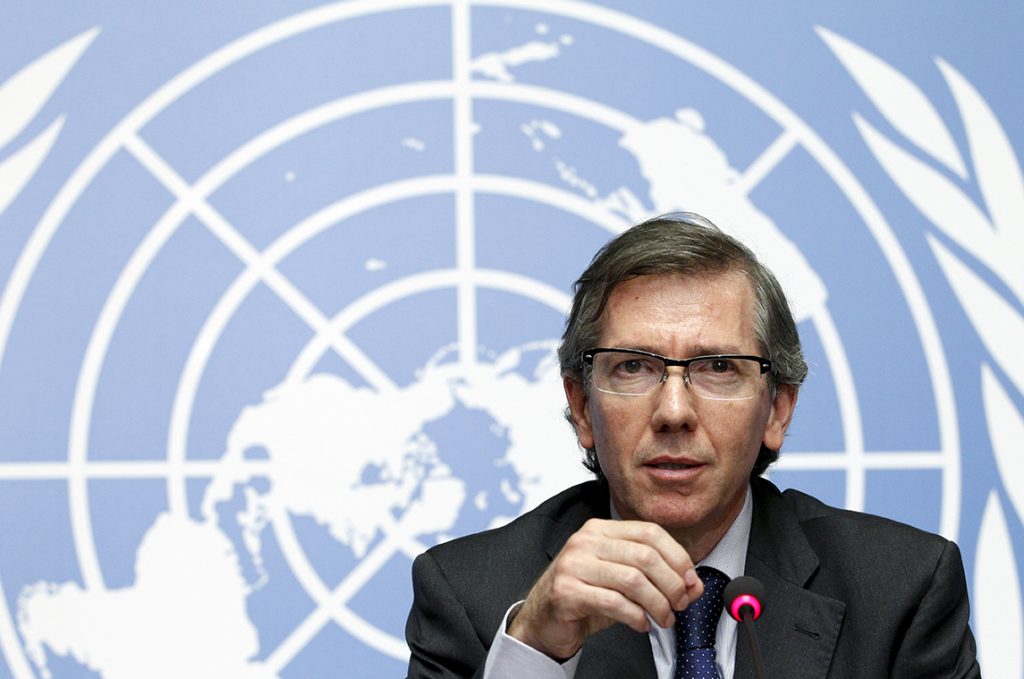 The announcement by the United Nations’ envoy for Libya of a national unity government after months of talks is just the “first step in a long journey” for the North African nation plagued by chaos since the ouster of longtime dictator Moammar Gadhafi in 2011, says the Atlantic Council’s Karim Mezran.

Libya today has two governments—an Islamist-backed one based in Tripoli and an internationally recognized one that was forced to flee the capital for the eastern city of Tobruk in in the summer of 2014 due to the deteriorating security situation.

Following months of dialogue aimed at bringing the two sides together, Bernardino Leon, the UN envoy, on Oct. 8 announced that delegates at these negotiations had finally agreed to his proposal to form a Government of National Accord. Leon also announced the names of the candidates who will lead this government.

Fayez Sarraj, who represents Tripoli in the Tobruk-based legislature (the House of Representatives), will head the proposed government. He will be supported by three Deputy Prime Ministers representing the west, east, and south of the country.

This is by no means a done deal. As a matter of fact, doubts have already begun to surface. The legislatures in Tripoli (the General National Congress, GNC) and Tobruk (the House of Representatives, HoR) must now ratify this agreement.

Karim Mezran, a Resident Senior Fellow in the Atlantic Council’s Rafik Hariri Center for the Middle East, discussed the significance of the latest developments and the challenges that lie ahead in an interview with the New Atlanticist’s Ashish Kumar Sen. Here are excerpts from our interview.

Q: What have the two sides agreed to as part of the UN proposal?

Mezran: [UN envoy Bernardino] Leon has obtained a political agreement around a few names that are supposed to form a Government of National Accord. This agreement is now to be approved by the HoR in Tobruk and the GNC in Tripoli.

The delegates at the meetings with Leon have agreed to present the names of the leadership nominees to the GNC and to the HoR.

Q: Are you confident that the two legislatures will ratify this proposal?

Mezran: The GNC originally opposed the dialogue, but it has since fragmented into various factions – some of which are very much in favor of accepting a Government of National Accord. So I am moderately optimistic that the two sides will approve this proposal

The most probable outcome is that the HoR will approve it, but the GNC may not. However, any speculation on this at the moment is purely clairvoyance.

Q: Is Fayez Sarraj a suitable candidate for the role of Prime Minister?

Mezran: Fayez Sarraj is an engineer who comes from a well-known Tripoli family that has been involved in politics since the struggle for independence in the 1940s. He was elected from Tripoli to the HoR. He did not boycott the HoR. Sarraj is a mild and uncontroversial person. These are qualities that may serve him well in the process of mediating between the various factions into which Libyan society has been splintered.

Q: Does this deal give Libya a real shot at peace?

Mezran: Peace for Libya is a long journey. This is just the first step of this long journey. It is the first step without which there would be no possibility to reach peace. The international community must support the Government of National Accord politically, economically, and militarily. If this happens and the regional actors understand that they have to stop supporting this or that faction for their own interests and work for the interests of peace and stability in Libya, then there is a chance that this government can succeed.

The real hard work still remains to be done. The militias need to be convinced to disarm, legitimacy of the state needs to be rebuilt, institutions need to be recreated, infrastructure must be repaired, and government employees have to be brought back to Tripoli. This can only be done with the total support of the international community.

Q: How have the GNC, HoR, and Gen. Khalifa Haftar, the controversial army chief, reacted to this deal?

Mezran: Haftar has been a longstanding opponent to any agreement. This agreement will see no role for him. He is the big loser.

As for the HoR and the GNC, there are critics of the deal in both, but it seems that the majority of the delegates understand the importance of moving forward.

Q: What happens after the HoR and the GNC approve the deal?

Mezran: If this deal is approved, the HoR will be the legislative body reincorporating those members who boycotted it [after the Supreme Court last year declared the body to be unconstitutional]. Once that happens a state council will be formed that will include mostly members of the GNC.

Elections will be held once security has been restored and it is safe for people to come out and vote.

Image: Bernardino Leon, the United Nations' envoy for Libya, announced a proposal for a national unity government on Oct. 8. The North African nation's two legislatures must ratify the deal before it can come into effect. (Reuters/Pierre Albouy)