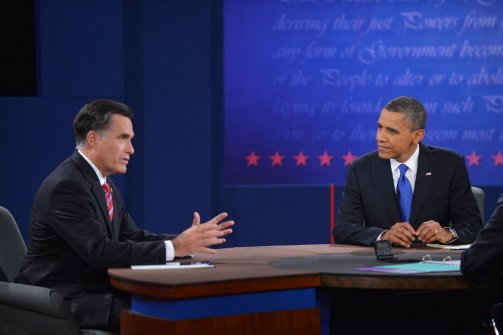 It was a debate on foreign policy when the most urgent priorities are at home.

Mitt Romney says he can restore the United States to its long-held image of the invincible superpower.

But the fall of the Berlin Wall and the collapse of the Soviet empire were world-shaking events that are more than two decades old.

Since then, the United States has fought two costly wars with zero net gains. Iraq, clocking at $1 trillion, now turns out to have been a geopolitical defeat. Iran enjoys more influence in Baghdad than the United States. Even worse, Iran is shipping weapons to the Assad regime in Syria via Iraq.

The European Union’s 17 countries (out of 27) that share the common euro currency are in the throes of an existential crisis. Unwilling to relinquish the last vestiges of national sovereignty, they keep kicking the can down a dead end street.

The almost unmentioned Afghan war — at least in the presidential debate — continues to sap NATO morale. Canadian, Dutch and French fighting forces have gone home. Only U.S. and British troops remain on operations and they are more concerned about getting killed by the Afghan army allies they trained than by Taliban guerrillas.

Defense specialists were already planning the repatriation of billions of dollars worth of hardware.

In the United States, 75 percent of those polled say they want out without waiting for the artificial exit deadline two years hence.

Two more years — all of 2013 and 2014 — haven’t convinced many that continuing to back the corrupt Karzai government is worth the cost in treasure and lives.

The official Chinese news agency warned “whoever is the next president to ‘tone down his get-tough-on-China rhetoric made along the campaign trail and deal realistically with China’s inevitable rise’ as a global player.”

The presidential debate was also a major plus for Israel. If there was any daylight between Obama and Israel, it closed rapidly in the exchange.

A major U.S.-Israel military exercise was rolling in Israel when Obama described the Jewish state as America’s best friend in the Middle East.

More important for Israel, the slaughter in Syria with more than 30,000 killed and its violent repercussions in Jordan and Lebanon, squeezed out any chance of progress on the establishment of an independent Palestinian state in the West Bank.

The name Iran came up 47 times and Obama left himself no wiggle room. He wouldn’t allow Tehran to possess nuclear weapons. He simply disagreed with Prime Minister Binyamin Netanyahu on the timing of airstrikes. Based on intelligence reports, Obama says next spring or summer would be time enough.

Future historians may mark the debate as a critical turning point to long-neglected domestic priorities. The burdens of non-essential foreign wars keep postponing the day of reckoning on the home front.

There is also acute frustration over diminishing leverage in momentous changes at the heart of the Arab world.

There is nothing the United States can do to prevent the Muslim Brotherhood from taking Egypt back to the religious dark ages.

We can talk up the rights of women and the need to protect religious minorities but withholding U.S. aid would simply move the Muslim Brotherhood extremists to sever the peace treaty with Israel.

The Salafists, a minority radical party with 25 percent of the seats in Parliament, are urging jobless youngsters to go to Syria to join jihad against the Assad regime. Iraq-based al-Qaida terrorists are already in this civil war. Hence the reluctance of the U.S. and NATO allies to become involved on the same side as transnational terrorists.

Romney seems to hark back to a world that no longer exists. Diplomatic strength coupled with unchallenged military might was a great Cold War combo – and convo. But it went the way of the dodo.

The time to come home from foreign wars and bring the United States into the 21st century may well be at hand. The burdens of non-essential foreign wars keep postponing the day of reckoning on the home front.

When Romney complained about the U.S. Navy down to World War I levels, Obama quipped there are also fewer horses and bayonets. And when Romney says he will bring the Navy back to 360 ships, he should have been asked where the funding was to come from.

The U.S. deficit is headed for $16 trillion.

Both Obama and Romney should keep their eye on the defense ball of the future — robotic warfare and cyberwarfare. Meanwhile, the home front’s infrastructure is in a state of collapse.

There are more than 4,000 deficient dams in the United States and $50 billion is required for priority repairs. And that’s just a small fraction of what’s urgently needed.