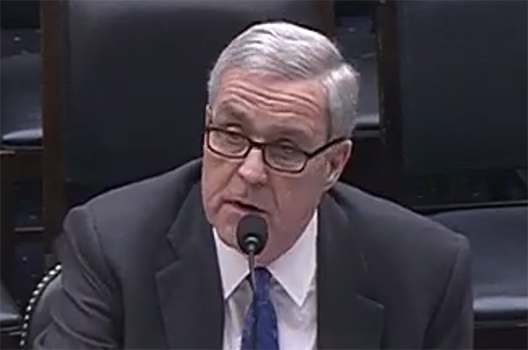 Former US Permanent Representative to NATO and Atlantic Council Board Director Douglas Lute testifies before the House Foreign Affairs Committee on March 13, 2019.

“NATO is both indispensable and in crisis,” Douglas Lute, a former US ambassador to NATO and Atlantic Council board director, told the House Foreign Affairs Committee on March 13. He described the nearly seventy-year-old alliance as “a cornerstone” of US foreign policy “that we all too often take for granted.” He argued that lawmakers should do more to reaffirm Washington’s commitment to its allies and to enact legislation requiring congressional approval before any alteration or withdrawal of the Untied States from the Alliance.

“The United States Congress can play a role to reassure allies and check and balance the president,” Lute said.

US President Donald J. Trump has consistently criticized NATO allies for not meeting the target of spending 2 percent of their gross domestic product (GDP) on defense, a goal set at the 2014 NATO summit in Wales. At times, Trump has implied that US involvement in NATO could be at risk should allies continue to underspend on their own defense. Recent reports suggest the White House is now considering demanding that US allies begin to pay for the stationing of US soldiers on their soil.

Lute agreed that “Europeans must contribute more to their defense” and conceded that “this administration is right to hold allies to the pledge” they set in Wales. Trump’s threats to pull out of NATO, however, are much more dangerous, according to Lute. “NATO’s single greatest challenge today is—for the first time in NATO’s history—the absence of strong committed US presidential leadership. Every previous president since 1949, both Democrats and Republicans, has understood the value of NATO,” he said.

Lute told lawmakers that they should “pass legislation requiring congressional approval should the president try to alter our treaty commitments or to leave the Alliance altogether.” He explained that congressional approval was required to enter the Washington Treaty in 1949, so similar approval should be necessary for any alterations or reversal. Given the widespread support the Alliance still has among lawmakers in both parties, such a requirement could reassure allies that Washington remains committed to the pact.

Lute argued that while allies should be spending more on traditional defense, the 2 percent threshold only captures part of the contribution member states make to NATO, and the White House and NATO leaders “should broaden [their] metrics” when determining how partners are contributing. “Spending on capabilities to counter hybrid tactics, including cyberattacks, disinformation campaigns, and interference in our democratic processes,” Lute explained, “should be taken into account as these may represent NATO’s greatest vulnerability.”

Trump’s perception of NATO as a financial drag on the United States also misses the bigger picture, according to Ian Brzezinski, a resident senior fellow in the Transatlantic Security Initiative  of the Atlantic Council’s Scowcroft Center for Strategy and Security, who testified alongside Lute.

The Alliance is about more than providing security to European countries, Brzezinski explained. “NATO has been a powerful force multiplier for the United States. Time and time again, European, Canadian, and US military personnel have served and sacrificed shoulder to shoulder on battlefields in Iraq, Afghanistan, and elsewhere around the world,” he said.

The network of partners NATO provides “allows the United States to leverage unmatched political, economic, and military power” unlike any other country in the world, Brzezinski explained. At a time when growing aggression by Russia in Eastern Europe and China in the Asia-Pacific is causing growing concern, Brzezinski said that Washington should remember that “no other military alliance can field a force as capable as NATO.” Lute agreed, reminding lawmakers that “the US created NATO and has maintained the Alliance for seventy years because the Alliance is in America’s vital national security interest.”

Brzezinski also explained that the regular contact with allies and partners helped strengthen the effectiveness of US military forces around the world, not just in Europe. It is “absolutely invaluable to have other countries whose militaries are not only fully interoperable but have deep personal relationships among their commanders and among their [non-commissioned officers],” he explained, adding that the United States “would not have been able to execute what we have done in Afghanistan, Iraq, and the Balkans without our NATO allies.”

?Brief thread on @IanBrzezinski‘s testimony before @HouseForeign on the current status of @NATO ahead of its 70th anniversary next month. “NATO is an invaluable alliance. The transatlantic security architecture it provides has transformed former adversaries into allies.” 1/2 pic.twitter.com/LB2gtmJn6A

Both Brzezinski and Lute insisted that the importance of the Alliance will only increase in the coming years as the threat of strategic competition from Moscow and Beijing grows. “NATO and our other treaty allies are the single greatest geostrategic advantage we hold over any peer competitor,” Lute said. “Russia and China have nothing to compare.”

While Trump is right to complain about the lack of spending from US allies, Brzezinski maintained that progress can be made in this area, and that the cost of the Alliance pales in comparison to the benefits it provides. Shouldering a considerable share of the burden for NATO “is the price of leadership,” he said, adding that “it is one whose returns have been consistently advantageous to the United States.”