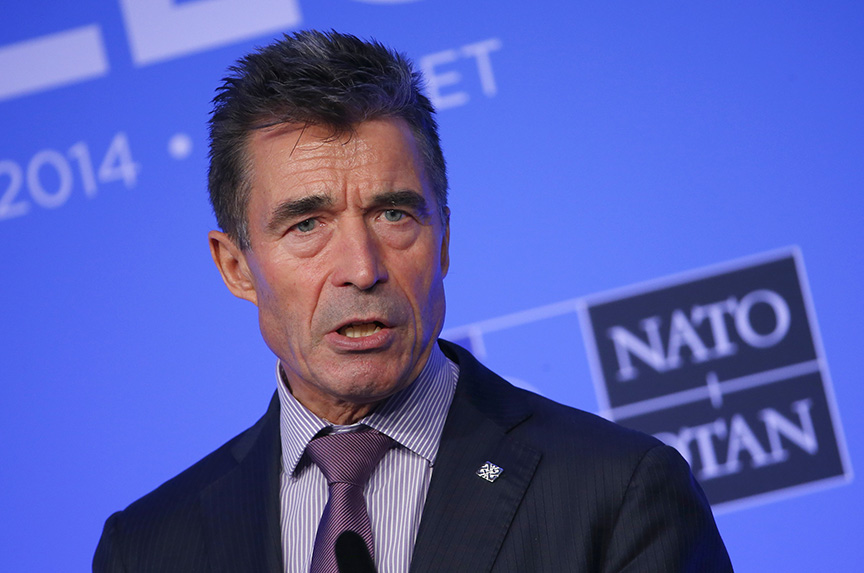 US President-elect Donald Trump must not strike any deals with Russian President Vladimir Putin that turn Ukraine into a “bargaining chip,” and must send a clear signal of commitment to the security of the United States’ NATO allies, two former secretaries general of the Alliance said on November 15.

Trump and Putin spoke by phone on November 14 in a conversation characterized as warm by representatives of both men.

“President-elect Trump is very fond of autocrats,” said Jaap de Hoop Scheffer, who served as NATO secretary general from 2004 to 2009.

Describing Putin as “a zero-sum player” and Trump as a would-be “transactional president,” he said a deal between the two could very well come at the cost of the security of Ukraine and the Baltic States. “That is why NATO and, by the way, also the European Union, should take a very clear and strong position in this regard: that a transactional president does not get into this sort of agreement with a zero-sum player,” De Hoop Scheffer said.

Anders Fogh Rasmussen, who served as NATO secretary general from 2009 to 2014, said Putin might be emboldened by the fact that Trump spoke with the Russian leader before he did with any US allies. Trump had a phone conversation with Ukrainian President Petro Poroshenko on November 15.

Rasmussen agreed with De Hoop Scheffer on the risk of “making Ukraine a bargaining chip” in any deal with Russia because “Ukraine would be left as a clear loser in an overall deal between two strongmen—Mr. Trump and Mr. Putin.”

Putin would “very much like to make such an agreement” with Trump, said Rasmussen noting that on the campaign trail Trump had noted that Crimea, which Russia annexed from Ukraine in March of 2014, could be considered part of Russia. Trump had also that as president he would look into lifting sanctions that were imposed on Russia over its annexation of Crimea.

Scheffer and Rasmussen spoke in a conference call hosted by the Atlantic Council on November 15. They were joined on the call by Javier Solana, who served as NATO secretary general from 1995 to 1999. Susan Glasser, editor of Politico, moderated the discussion and Damon Wilson, executive vice president for programs and strategy at the Atlantic Council, introduced the speakers.

In an earlier interview with the New Atlanticist, Wilson described Russia as a wild card. “Key is that any deals made with Russia advance American interests and values, and do not sacrifice our friends, allies, and partners in the process,” he said.

“This is why Vladimir Putin is looking for a deal: He is eager to sit down and carve up the world into spheres of influence. We roll back sanctions while he simply consolidates the gains he’s made on the ground. He gets Ukraine, he gets Georgia and Moldova, and perhaps he even has some say over some of the former Warsaw Pact countries that are now our NATO allies. That is a kind of deal that rewards—and incentivizes—egregious behavior and one we can never consider,” he added.

Over the course of his presidential campaign, Trump’s position on NATO evolved from questioning the United States’ role in the Alliance to supporting it. He has called NATO “obsolete” and threw into doubt NATO’s resolve to maintain collective defense as enshrined in Article 5 of the Washington Treaty.

On September 26, in a debate with his Democratic opponent, Hillary Clinton, in New York, Trump said that the United States “cannot be the policeman of the world, we cannot protect countries all over the world, where they’re not paying us what we need.”

Newt Gingrich, a Trump supporter and former speaker of the House of Representatives, also expressed doubts about whether a Trump administration would risk nuclear war with Russia by coming to the defense of Estonia in the event of a Russian attack. Estonia is one of the five NATO member states that actually spends the required two percent of its GDP on defense. Gingrich is now being talked about as a possible secretary of state in a Trump administration.

At a White House press briefing on November 14, US President Barack Obama said Trump told him that as president he would remain committed to NATO.

“And so one of the messages I will be able to deliver is his commitment to NATO and the transatlantic alliance,” Obama said before heading off on a trip that includes stops in Greece and Germany—his last visit to Europe as president.

De Hoop Scheffer said he appreciated Obama’s remarks, but that it is Trump who should make a clear and public pledge to uphold the United States’ Article 5 commitments.

Both Rasmussen and De Hoop Scheffer emphasized the importance of holding a NATO summit soon after Trump’s inauguration in January of 2017. Explaining the significance of such a summit, Rasmussen said a NATO summit would help provide clarity on US commitments to Article 5.

“Too much [lack of clarity] might lead to miscalculations from potential aggressors,” he said.

Pointing to Trump’s past comments on the US commitment to come to the defense of its NATO allies, Rasmussen said: “One thing is to say it during a campaign, but it is essential that it is not repeated as president.”

“We should not get in a situation of excessive concern,” said Solana, who served as NATO secretary general from 1995 to 1999.

“We need to take more time to see how things develop” and who Trump picks for his cabinet, Solana said. “I am optimistic that this problem with which we are living today will be overcome as far as NATO is concerned.”

While warning against making bad deals with Russia, Rasmussen said: “If we accept that Russia can just invade Ukraine and destabilize eastern Ukraine without any consequences then, in fact, we have given up this rules-based order and that would have far-reaching consequences maybe also in other parts of the world, and definitely it would not serve American interests.”

This past summer, NATO for the first time agreed to deploy troops to the Baltic States—Latvia, Lithuania, and Estonia—and Poland, and step up air and sea patrols to reassure allies facing threats from Russia.

De Hoop Scheffer said such a forward deployment is absolutely essential for deterring Russia. “We should discourage and deter President Putin [from acting] in the way he has acted vis-à-vis Crimea,” he said.

Rasmussen, too, said it is crucial to stick to the forward deployment decision. “It is not offensive, it is a defensive move,” he said.

Saying he was in favor of better relations with Russia, Rasmussen noted that both former US President George W. Bush and Obama wanted to improve relations with Russia, but were quickly disabused of that notion by Putin’s behavior. “I do believe that Mr. Trump will realize exactly the same, namely that the best way to engage Putin is to maintain a firm stance, maintain unity across the Atlantic, and negotiate from a position of strength,” he added.

European leaders, meanwhile, have struggled with a unified message in response to Trump’s election. Populist forces similar to the ones that led Trump to victory are on the rise across much of Europe. EU foreign policy chief, Federica Mogherini, convened an emergency meeting of European foreign ministers in Brussels on November 13. The meeting was intended to take stock of Trump’s electoral triumph. The British and Hungarian foreign ministers skipped the meeting saying it was unnecessary. The French foreign minister did not attend due to scheduling issues.

Trump had praised the British referendum that produced a vote in favor of the United Kingdom leaving the EU. Comparing his campaign to the one in the UK he said would soon be known as “Mr. Brexit.” On November 12, he met Nigel Farage, one of the leaders of the Leave camp.

“A divided Europe cannot be a strong partner for the United States,” said Rasmussen.

While the UK grapples with the reality of Brexit, in France, President François Hollande is struggling with low approval ratings and a strong opponent in Marine Le Pen of the right wing National Front ahead of elections early next year.

Rasmussen said Trump can help make American great again—a reference to the president-elect’s campaign slogan—by ensuring that the United States defends the liberal world order; develops strong alliances with its NATO partners as well as with other likeminded democracies; and builds a strong military.

De Hoop Scheffer agreed with criticism from Trump as well as Obama that the United States’ NATO allies need to contribute their fair share toward their defense. Only five of NATO’s twenty-eight member states contribute the suggested two percent of their GDP toward defense. “For us Europeans… this is the moment really to become responsible again,” De Hoop Scheffer said.

Trump’s election is attributed in part to a backlash against globalization. The Republican has vowed to undo the North American Free Trade Agreement (NAFTA) and has spoken out against free trade.

De Hoop Scheffer said: “No American president, and also not Donald Trump, can switch off globalization.”

Image: Former NATO Secretary-General Anders Fogh Rasmussen said: “If we accept that Russia can just invade Ukraine and destabilize eastern Ukraine without any consequences then, in fact, we have given up this rules-based order and that would have far-reaching consequences maybe also in other parts of the world, and definitely it would not serve American interests.” (Reuters/Yves Herman)