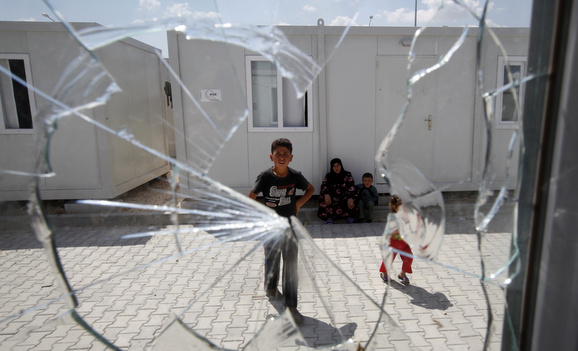 Former Turkish Foreign Minister Yasar Yakis, one of Turkey’s longest-serving diplomats, said the situation between Turkey and Syria might actually get worse if President Bashar al-Assad leaves or is overthrown because chaos will hurt Syria first and Turkey second.

“The Syrian question is more complex than we all think” and the answer is not foreign military intervention, but a negotiated solution with the Assad regime, he said in an interview with Al-Monitor Washington correspondent and Atlantic Council senior fellow Barbara Slavin on Wednesday. Yakis, an expert on the Arab world who helped establish the ruling AKP party in 2001, criticized Turkish Prime Minister Recep Tayyip Erdoğan for breaking diplomatic ties with Syria last year and went so far as to say that the June 22 Syrian shoot-down of a Turkish military plane could enable the two countries to restore channels of communication. Excerpts of the interview follow:

Slavin: How do you think Erdogan is handling the shoot-down and will he be able to prevent the outbreak of real hostilities with Syria?

Yakis: I see signs of Turkey growing wiser and more measured… At one stage, we have taken a position which deprived Turkey of leverage to influence developments in Syria because we cut all our channels of communication with Bashar al-Assad’s regime. With the present decision about the plane, Turkey took the right path… It is better not to use a weapon; when you use a weapon, your chance to have an impact on the development is gone forever… Turkey has no interest in escalating the crisis in the region because if it escalates, then other players may come into the scene and Turkey will be one of the countries that will suffer the most consequences…

Slavin: It appears that the opposition is getting much bolder and there are reports that they are controlling large swathes of the Syrian countryside.

Yakis: One group may have achieved an attack in one district, another may be successful in another region, but as long as they are not coordinated, they will remain separate and it could turn to the worst because when one segment becomes too strong in one region and another becomes too strong in another, they may see themselves as rivals… when it comes to go to the next step. There are a lot of unknowns in Syria…

We do not know what type of outcome will produce a democratic election in Syria…. Nobody made a very neutral public opinion poll in Syria. Seven months ago, a Qatari public opinion company carried out a survey and found out that 56% of the Syrian population was supporting Bashar. To what extent it dwindled down we do not know. Without relying on solid data, you cannot say that the falling down of the regime is imminent.

Slavin: UN envoy Kofi Annan has called a meeting in Geneva on Saturday [June 30] of a contact group excluding Iran. Can it accomplish anything?

Yakis: In the absence of Iran, what are we going to discuss? The major problem will be to persuade Iranians in Geneva not to continue their present practice [in Syria] so excluding Iran is not the best decision.

Slavin: Why do you think the US excluded Iran?

Yakis: It must be preconceived ideas about Iran; they [the Americans] know what they [the Iranians] are going to say and nobody will be able to persuade Iranians to do otherwise… But holding the meeting is the right decision. Will it solve the problem? No, but it is a step in forward.

The Syrian question is more complex than we all think… In Syria, unlike in other Arab countries, the destiny of the army, the political regime, security and intelligence…are tied together very closely. If one falls, the others should also fall… Without creating a substitute for these four elements…then the country will fall into chaos.

Slavin: So you can’t just remove Assad and put someone else in his place?

Yakis: The main cause is not Assad himself… If it was possible, Assad should be kept there. If the Baath regime he inherited from the father is removed, at that time we will have gotten rid of the main cause. My perception is that a British-educated ophthalmologist…would never do all these things. It is because of the pressure of this team that he inherited from his father that caused all this trouble. When you remove Bashar and leave the others, it may be even worse…

Turkey is the country that will suffer the most from that kind of chaos after Syria itself… There will be a tremendous refugee problem… Secondly, the [ethnic] group that is the strongest and best organized in Syria is the Kurds…Two of their parties are very strong…One of them is in touch with the PKK terrorist organization and is acting together with the Syrian regime; the other is close to [Iraqi Kurdish leader Massoud] Barzani and is with the opposition. We know from…our experience in northern Iraq that when the Kurdish question is raised, the Kurds are capable of putting aside their differences and uniting… If the country falls into chaos, the Kurds are likely to declare their autonomy…so in addition to the refugee problem, we will have a Kurdish regime on the Turkish border and more difficulty fighting PKK terrorists…

Of course, the population will look for one group which is responsible for the troubles of the society. It is the Alawites. So the Alawites will be threatened in this environment of chaos and they would like to look for a more homogenous Alawite region… I lived in Syria from 1980-84 and visited [Hama, scene of a horrific massacre by government bombardment in 1982] one week after the bombing. Entire districts were bombed because one member of the Muslim Brothers had escaped there…. I saw a man crying. He said, ‘my entire family is under this rubble.’ I do not forget this after 30 years… If there are free elections… wouldn’t they [Syria’s Sunni majority] ask that the perpetrators of this Hama and the other recent massacres to bring them to justice? They will. And most probably Bashar Assad is frightened of this and the old Baathists…

Slavin: So what is the solution?

Yakis: For foreign military intervention, you need international legitimacy…the UN Security Council. When Russia is there, it’s not easy. Russia has vested strategic interests in Syria…Under these circumstances, it may not be the six-point Annan plan but it has to be a plan that will have the blessing of the international community which means the UN Security Council and another…version of the Annan plan… It is preparing the ground for a negotiated settlement. Negotiated with whom? It is with the government. The regime, with or without Assad, has to be part of the solution rather than part of the problem. This may not be Turkey’s position but as a person who lived there and knows the sensitivities, this may be one exit.

Barbara Slavin is a senior fellow at the Atlantic Council and Washington correspondent for Al-Monitor. This interview originally appeared in Al-Monitor.