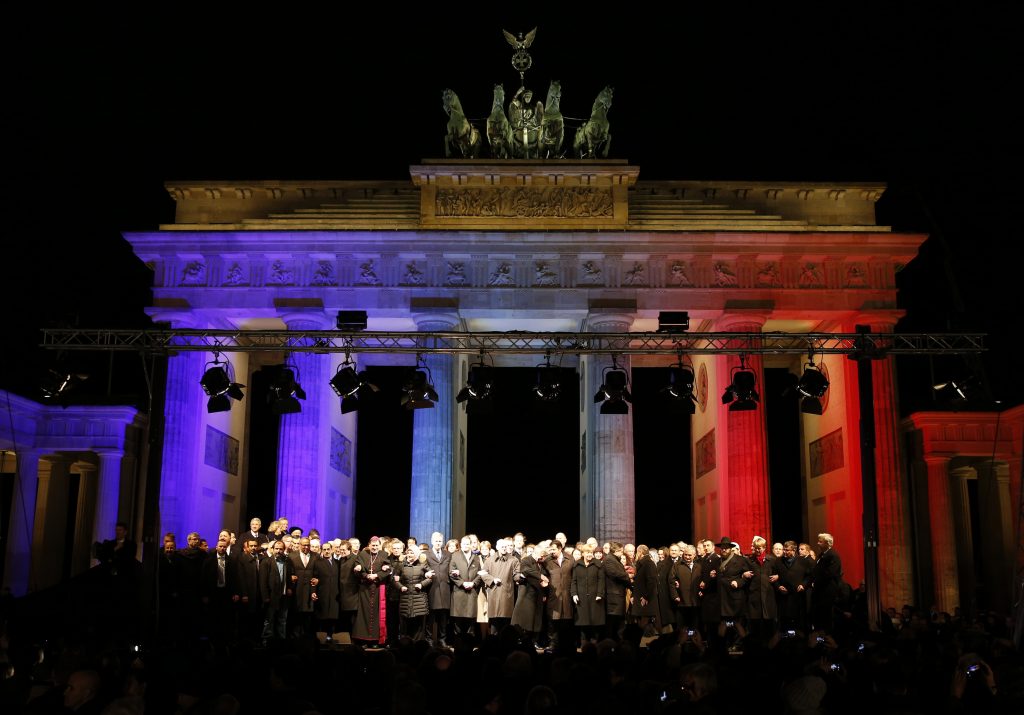 French officials on Tuesday hunted for the accomplices of three terrorists who killed 16 people in Paris last week, while some of the victims of the attacks were laid to rest at tearful funerals.

In Washington, however, the controversy over the Obama administration’s decision not to send a high-ranking US official to participate in a march against terrorism in Paris on Sunday refused to go away.

White House spokesman, Josh Earnest, who on Monday conceded that the Obama administration “should have sent someone with a higher profile” to participate in the march in Paris, on Tuesday declined to respond to even more questions about the decision not to send such a representative.

“Had the circumstances been a little bit different, I think the president himself would have liked to have had the opportunity to be there,” Earnest had said on Monday.

The uproar in Washington is “a storm in a D.C. tea cup,” Nicholas Dungan, a nonresident senior fellow in the Atlantic Council’s Transatlantic Relations Program, told CNN.

“The relationship [between the US and France] is so close it is highly unlikely that this results from an oversight,” said Dungan.

He contended that the French reaction to the controversy was a clear sign that US participation in the march on Sunday was not an issue that they were terribly upset about.

Meanwhile, Charlie Hebdo, the satirical magazine the offices of which were the scene of a bloodbath when two radicalized brothers shot dead 12 people on January 7, published on the cover of first edition since the massacre a cartoon of a tearful Prophet Muhammad holding a sign that says “Je suis Charlie” (“I am Charlie”), which has become a rallying cry in the wake of the attacks. The headline says: “All is forgiven.”

This latest cartoon could offend devout Muslims who see any depiction of the Prophet Muhammad as heresy. Some Muslim clerics warned on Tuesday that this cover could reignite passions.

Besides the 12 people who were killed in the attack on Charlie Hebdo, four others were killed January 9 when an associate of the two terrorists who attacked the magazine took hostages at a kosher grocery store in Paris.

French police launched a manhunt for the dead gunmen’s accomplices, one of whom was reported to have fled through Turkey into Syria.

Dungan told Bloomberg Businessweek that it was “far-fetched” to draw the conclusion that the attacks in Paris signaled a larger terrorist threat to Europe.

“Even though this attack occurred, the one thing everybody knows about France is that its security is fantastic and water-tight,” said Dungan.

“The fact that these guys got through to what was actually probably a pretty soft target is absolutely no indication, I don’t think, of any sort of larger vulnerability,” he said.

The “idea that this attack is somehow connected to a larger threat to the West, that it is somehow imminent that it is going to have an effect on business or finance, would be far-fetched, and in that sense it makes sense that the markets haven’t reacted,” he added.

The French have responded to the terrorist attacks with a beefed up security presence and peaceful gatherings.

Obama faced criticism at home for not sending a more senior representative, and Sen. Ted Cruz, Texas Republican, wrote on Time.com “our president should have been there, because we must never hesitate to stand with our allies.”

French officials, however, played down the controversy in a stark reminder that ties between Washington and Paris have improved since the days of deep divisions over the US invasion of Iraq in 2003.

Washington and Paris have become increasingly aligned on foreign policy and France has emerged as a key US military ally. The US and France have been working closely together on finding a deal on Iran’s nuclear program and on resolving crises in North Africa.

France was quick to join the US campaign of air strikes against the Islamic State of Iraq and Syria (ISIS).

The attacks in Paris have, if anything, only served to strengthen French resolve to fight terrorism. France’s lower house of parliament on Tuesday approved the extension of French airstrikes on ISIS, which has taken over large swathes of territory in Syria and Iraq.

The US and France now have “seamless” cooperation on a broad range of bilateral issues, including intelligence cooperation, said Dungan.

Image: Germany’s President Joachim Gauck, Chancellor Angela Merkel, and other leaders join religious leaders January 13 for a rally in Berlin, organized by Muslim groups, in support of the victims of the attacks in Paris by Muslim extremists. (Reuters/Fabrizio Bensch)