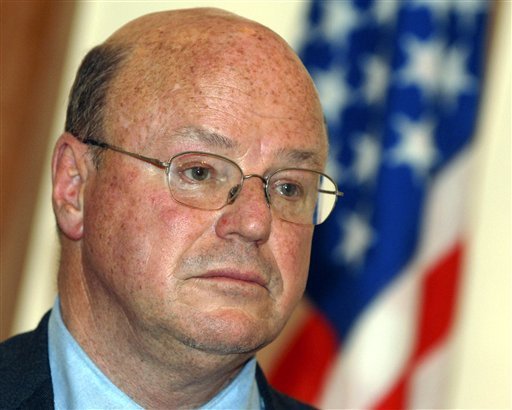 Frank Wisner, President Barack Obama’s envoy to Cairo who generated controversy over the weekend by declaring that Egypt’s Hosni "Mubarak must stay in office" to facilitate a smooth transition, has been recalled following revelations that he has financial ties to Mubarak’s regime.

The Independent’s Robert Fisk broke the news that Wisner is a lead attorney at the mega law firm Patton Boggs, "which openly boasts that it advises ‘the Egyptian military, the Egyptian Economic Development Agency, and has handled arbitrations and litigation on the [Mubarak] government’s behalf in Europe and the US.’"

The iconoclastic Fisk observes, "Oddly, not a single journalist raised this extraordinary connection with US government officials – nor the blatant conflict of interest it appears to represent."  He also wonders, "why on earth was he sent to talk to Mubarak, who is in effect a client of Mr Wisner’s current employers?"

It is often said that the appearance of impropriety is indistinguishable from impropriety. But, while Wisner’s statements were anything but helpful, there’s little reason to think that he was giving anything other than his honest, professional opinion as a distinguished veteran of 36 years in the Foreign Service, including as service as "US ambassador to Egypt, Zambia, the Philippines and India under eight American presidents."

As The Guardian’s Michael Tomasky rightly notes, we don’t know that Wisner worked on the Egypt account for Patton Boggs — or was even aware that they have the account.  It is, after all, "a massive firm with 600 attorneys spread across nine locations."

The much more likely scenario is that Wisner simply committed a classic "Kinsley gaffe," named after the journalist Michael Kinsley, who once quipped that "A gaffe is when a politician tells the truth."

In this case, Wisner was almost certainly saying exactly what was on the minds of every foreign policy player in the Obama administration — yet precisely what they were taking great pains not to actually say in public.

Precisely because Egypt is not a liberal democracy and because Mubarak and his predecessors have been so effective at suppressing opposition parties, there is no existing institutional framework for a smooth power transition. As much as we would all like to see "free and fair elections" take place this afternoon and a Swedeneque government in power tomorrow morning, it’s not going to happen. So, Mubarak’s recognition that his legacy is best served by benevolently presiding over a power transition for the next few months is the least bad outcome.

But hard truths are often best left unspoken. The United States government can’t very well come out and tell people protesting a repressive regime to be patient with the dictator a little while longer, so it carefully issues statements about nonviolence, the rule of law, respect for democracy, and all the rest without quite saying what the policy will be.  Perhaps, freed from the shackles of diplomacy, Wisner wanted to play it straight just one time.  Alas, it wasn’t helpful.