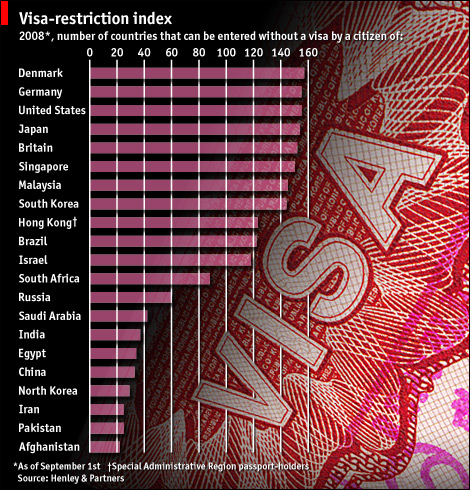 By one measure, at least, Denmark is the freest country on earth.  The Economist:

DANES faced the fewest restrictions on travel in 2008: they were able to visit 157 countries or territories without a visa according to an annual report by Henley & Partners, a consultancy. The Irish, Finns and Portuguese were only marginally less welcome abroad, with visa-free travel available to 156 countries.

Cato’s Will Wilkinson observes, “Americans have it pretty good in this department, but it would be nice to be as free as a Dane. Is that so much to ask?”

The original study isn’t particularly helpful in ascertaining why some countries’ citizens are more welcome than others.  They helpfully inform us that, “Visa requirements are also an expression of the relationships between individual nations, and generally reflect the relations and status of a country within the international community of nations.”  My strong guess is that the negligible difference between the states clustered at the top is in reciprocity.  Post-9/11, the United States has made it harder for foreign nationals to enter.  I suspect that some have put up reciprocal barriers in protest.