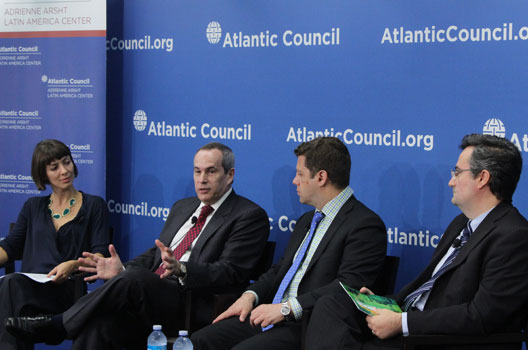 The Lavo Jato corruption investigations, also known as Operation Car Wash, into Petrobras, Brazil’s oil giant, shocked the energy sector and helped fuel one of the country’s worst recessions. Nonetheless, some analysts are optimistic that the industry can open itself up to foreign investors and domestic competition to once again generate prosperity.

“The energy industry in Brazil is on the verge of its biggest transformation in decades,” wrote Décio Oddone, former CEO of Petrobras, in his latest report for the Atlantic Council—Oil & Gas in Brazil: A New Silver Lining?

“Petrobras has never experienced such a profound transformation. In fact, this is the first time the energy landscape has significantly changed since Brazil became an industrial economy,” he noted in the briefing.

Oddone spoke at the Atlantic Council on July 14 to launch the briefing. He was joined by Jason Fargo, the Latin America Lead for Energy Intelligence, and Juliano Basile, a Washington correspondent for Valor Económico. Andrea Murta, an associate director for the Council’s Adrienne Arsht Latin America Center, moderated the conversation.

Oddone’s comments come as Brazilian politics are being riled by impeachment proceedings against former President Dilma Rousseff on budgetary manipulation charges, a transition government under interim President Michel Temer, one of the worst economic downturns in its recent history, and investigations into corruption charges against Petrobras involving government officials. These events have created a volatile political and economic environment and have undermined foreign investor confidence in Brazil, particularly in the oil industry. However, the energy sector was experiencing obstacles even before Lavo Jato began.

Petrobras—a state-operated energy company—has had predominant control over the country’s oil and natural gas reserves. No private company has successfully entered the oil refining industry in Brazil. The discovery in 2007 of the pre-salt layer—an underwater geological layer holding an estimated forty to fifty billion barrels of oil reserves—seemingly offered new opportunities for exploration and production by domestic companies. However, the area was ultimately contracted to Petrobras as the sole operator. As oil demand increased and production forecasts skyrocketed, it seemed that the pre-salt layer would bring unprecedented opportunities for Petrobras.

In 2014, the country’s economic situation worsened. Oil prices dropped, a country-wide recession hit, and the Lavo Jato investigations launched. Petrobras went into debt after it couldn’t finance investments that would have powered the expanded operations, forcing it to sell off assets and lower production. More importantly, since Petrobras controls the majority of the energy sector—and the pre-salt layer specifically—a decrease in production has left significant gaps in the company’s production and exploration abilities. Now, experts agree that these gaps bring about untapped potential for smaller companies and foreign investment.

Once Petrobras was granted sole ownership of the layer, it “slowed down investments in the pre-salt. Petrobras alone was not able to keep up development in the way that development was possible. So opportunities were lost… If the pre-salt is opened for foreign companies, and Brazilian private companies as well, we can anticipate that the investments will flow much faster to Brazil,” Oddone said.

Similar success has been seen in Mexico. Since 2014, the country has undergone a series of reforms to open its energy sector after seventy-six years of state monopoly. The industry’s liberalization is expected to attract billions in new investment, increase production, and make Mexico more competitive internationally.

The Brazilian government is considering a new bill in August that if passed, will disband Petrobras’ sole ownership and thirty percent minimum stake in all operations. This could enable market decentralization—similar to Mexico—thereby increasing Brazil’s competitiveness. But the debate still hinges on how long Brazil will have to wait before it sees these changes.

“There’s a ‘wait-and-see’ attitude” said Fargo. “Companies are a little gun-shy about what they’ve seen in Brazil with when they went from a concession model, a relatively open, very attractive playing field for foreign investment in the oil sector. Then the PT [Worker’s Party} government under Lula [Inacio Luiz Lula de Silva] and Dilma shut that down. Now there’s talk of change and in principle, companies are very excited about that. But they still want to see how things shake out.”

Uncertainty remains whether or not the proposed reforms will last. Brazil’s protectionist history has some speculating that it could renege on some of its reforms once oil prices increase. Additionally, it remains to be seen how much Temer will open Brazil’s industry, despite indications that he will pursue market oriented policies. In the long term, much of the sector’s transition depends on whether the policies are continued, and there is currently no clear cast of candidates or parties for the 2018 elections. And, as far right sentiments and political disenchantment increase across the country, many are anticipating a complete change in policy.

Basile was cautiously optimistic about Brazil’s future despite its ambiguity: “We really don’t know what we’re going to have in 2018, but we are really learning many hard lessons, and I think the environment for business will be better.”

Rousseff’s removal and the objectivity of the Lavo Jato investigation could strengthen perceptions about a change in the rule of law in Brazil to the tune of new investments, but not exponentially, he added.

When compared regionally, Brazil has been more stable than its neighbors, said Fargo; “The expectation is that Argentina goes through cycles every decade, where in comes a populist…I don’t think Brazil is in that category. There are lessons learned here. Time has shown that …those [former] policies led down a cul-de-sac. I think there does seem to me to be a sense of the things we’re seeing now will be long lasting.”

“After all of those, I hope that we will have learned we need an open economy and attract investment,” he added.