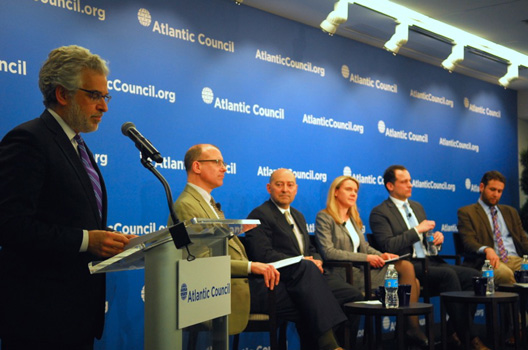 In one scenario, an intelligence officer named Army Maj. Morgan Maltz is arrested on suspicion of espionage and possible treason. The top-secret computer files he sold to Beijing have allowed China to destroy a crucial Pentagon undersea communications cable, putting the entire Asia-Pacific region on its highest alert since World War II.

In another, a demoralized Vladimir Putin—his popularity at home shaken by declining oil prices and falling living standards—stirs up ethnic tensions in Estonia as a pretext for invading Russia’s tiny Baltic neighbor. As the Kremlin launches cyber attacks against US and European websites, Russian troops set the Estonian capital of Tallinn on fire, provoking a massive military retaliation by NATO forces.

And in yet another scary scenario, unknown terrorists take over an oil installation in the tar sands of Alberta—prompting fears of a foreign conspiracy to disrupt Canadian oil exports—and a hostile swarm of drones attack military and civilian targets along a remote coast on New Zealand’s South Island. In the meantime, India orders a drone strike of its own against Pakistan, while a newly independent Kurdistan threatens Turkey.

All three futuristic nightmares are written as breaking news stories by veteran journalists in the field—with vivid, blow-by-blow descriptions of how World War III unfolds.

The stories were among the top entries in a writing contest organized by the Art of Future Warfare Series, a project of the Atlantic Council’s Brent Scowcroft Center on International Security. Barry Pavel, the Center’s Director, explained its purpose at a March 17 discussion titled “How the Next Great War Begins.”

“This project looks at how art and creativity can help illuminate thinking about the outbreak of 21st century conflict,” Pavel said. “We used the centenary of World War I to elicit fictional front-page dispatches covering the outbreak of the next great conflict.”

The winning entry, Coffee, Wi-Fi, and the Moon, was written by Nikolas Katsimpras, Senior Fellow at the Hellenic American Leadership Council and Adjunct Lecturer at New York’s Columbia University.

Katsimpras read aloud his story, datelined May 28, 2020, which describes how hackers of unknown origin—infiltrating the WiFi network of a Starbucks outlet just blocks from the Kremlin—have disabled Putin’s pacemaker, killing the Russian leader instantly.

“Today is the 24th day of continuous blackouts in New York, Washington DC, Moscow and hundreds more cities worldwide,” his article begins. “It is considered to be only the beginning of a spiraling conflict. Who could have imagined, though, that the greatest escalation of the 21st century might have started with a single cup of coffee?”

As fanciful as Katsimpras’ story is—with descriptions of Wall Street’s collapse and helium-3 mines on the moon—there is value in imagining such scenarios, say analysts.

“We are woefully unprepared for cyber warfare,” said James Stavridis, Dean of Tufts University’s Fletcher School of Law and Diplomacy. “Although it has not killed anyone yet, this could bring the world to its knees.”

Stavridis and Katsimpras were among four panelists to participate in a discussion and Q&A. The others were Ryan Evans, CEO and Editor-in-Chief of War on the Rocks, and Siobhan Gorman, Director of the Brunswick Group’s Washington office. Moderating the discussion was Steve Grundman, M.A. and George Lund Fellow for emerging defense challenges at the Atlantic Council’s Brent Scowcroft Center on International Security.

“What would it be like to cover the next great war, particularly the cyber components?” wondered Gorman, a former Wall Street Journal reporter who covered intelligence before joining Brunswick. “Most, if not all, of these dispatches had some component of cyber war attached to them, which, as most military experts will tell you, is indeed the future of war. And I think the cyber threat was captured well in these dispatches.”

The problem, she said, is that by the time journalists realize the next great war has started, it may be too late.

“Given the deluge of information that comes across the Internet, it can be very difficult for reporters to be able to discern fact from fiction. We’ve seen this happen over and over again,” Gorman said. “There are lots of rumors on Twitter, and reporters have to figure out if they’re true.”

Added Stavridis: “The fog of war is impenetrable in the cyber world. If we can’t understand from whence an attack comes, how do we generate a coherent, strategic, and dare I say, a legal response?”

Stavridis, a retired US Navy Admiral who served as NATO’s 16th Supreme Allied Commander Europe from 2009 to 2013, and led the US Southern Command (Southcom) from 2006 to 2009, said art and literature—particularly fiction—can help modern-day strategists predict wars of the future as well as gain an appreciation for other cultures.

“When I was a commander at Southcom, we generated reading lists for our forces which included not only nonfiction books which we all know and love, but also novels,” he said. “Can you really understand Latin America without reading One Hundred Years of Solitude by Gabriel García Márquez?”

Stavridis recommended three novels that “do a pretty good job” of illuminating how wars begin: Lord of the Rings by J.R.R. Tolkien, which delves into the issues of ethnic cleansing and revenge; Constantinopolis, a work of historical fiction; and finally Red Storm Rising by Tom Clancy. For good measure, Stavridis added a fourth: Peter Singer’s Ghost Fleet: A Novel of the Next World War, which is set in 2025.

Evans said he first learned about war through works of fiction like Joseph Heller’s Catch 22, as well as the novels by Graham Greene and Kurt Vonnegut.

“Fiction is actually invaluable to understanding war, because most of us will never experience it,” said Evans, who was deployed to Afghanistan’s Helmand province in 2010-11. “Analysts are generally terrible at predictions, so for that reason alone, fiction forces us out of our bureaucratic, Washington bubble to think about war in a fresh and exciting way—and hopefully in a way that leaves us more prepared.”