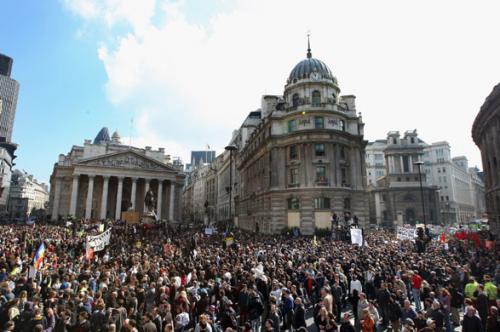 The G20 summit was marked by protests of all shapes and sizes, from marches to effigies to giant games of Monopoly in the streets.  Here is a roundup of some of these activities.

Certainly the most noticeable and reported protests were those involving thousands on the streets of London.  The BBC estimated that around 5,000 people took to the streets on Wednesday alone.

There was no shortage of diversity in these gatherings, as CNN reports: “Thousands of anti-capitalists, anarchists, and environmental campaigners descended for protests in several locations in London, including its financial center around the Bank of England, Britain’s central bank.”  However, the protests soon turned violent; the London Times:

Four good-natured marches against war, capitalism, homelessness and climate change had converged on the Bank of England. Four thousand people were exercising their right to protest. Then, at noon, a small group of hooded youths, bent on confrontation, surged towards a police line stretched across Threadneedle Street between the high-walled Bank and the Royal Exchange. The demonstrators allegedly threw a canister of CS gas. A policeman was injured. Helmets were ripped from officers’ heads.

Shortly before 2pm windows of a Royal Bank of Scotland building were smashed — Sir Fred Goodwin’s RBS being seen as a prime example of capitalist greed. Soon bottles, cans and paint bombs were raining down on the police. Protesters chanted: “Our streets” and fought with police. Several retreated with blood streaming from head wounds.

There is the expected debate over whether the police response was appropriate, with protestors accusing the police of heavy-handedness.  They argued that the death of a man in Wednesday’s chaos was evidence of police overreaction (the cause of death remains unknown).

Stuart Fraser, a representative from the City of London Corporation, defended police actions: “The high cost [of the security operation] is the price of democracy.”  The London Times added:

It is easy to accuse the police of being heavy handed, but standing just feet away from them it was easy to see and hear the abuse they came under from the hardcore element within the crowd.

They were spat on, hit and had vile abuse screamed into their faces from inches away. But does this give them the right to indiscriminately hit anyone in their way?

Not all protests were spotted by violence.  It is difficult to deny the humor in a giant game of Monopoly, which the BBC reported was played on the streets of London with huge crates of fake money.  The same article noted that French free climber Alain Robert, known as the Human Spider, attempted to scale the Lloyds’ building.  He succeeded in unfurling a banner before returning to the ground.

BBC technology blogger Rory Cellan-Jones noted an interesting trend at the protests – the increased use of technology to organize gatherings:

Members of the police, it seems, are bracing themselves for trouble on the streets of London as the G20 summit gets underway. But there’s also a battle going on in cyberspace, as the various protest movements use all the latest tools to organise.

We’ve become accustomed to seeing Facebook, Twitter and other social networks used to bring together protesters or to run campaigns. What’s different this time is that it’s not just opponents and critics of the global get-together who are using these tools – it’s also the organisers themselves.

However, just how many protestors are also social networkers remains unknown.  Cellan-Jones added with a hint of sarcasm, “Twittering, blogging and Facebooking about the G20 could turn out to be a minority interest. Maybe we’re about to find out just how interested young social networkers are in world events rather than in celebrity gossip?”

With the G20 meeting out of the way, it will be interesting to see how demonstrations unfold at the upcoming NATO summit in Strasbourg and Kehl.  “French and German police are bracing themselves for the NATO meetings on Friday and Saturday with massive security precautions,” Spiegel reported.  Here’s hoping violence is absent and humor abounds.

Valerie Nichols is a web editor at the Atlantic Council.  Associate editor Peter Cassata contributed to this report.