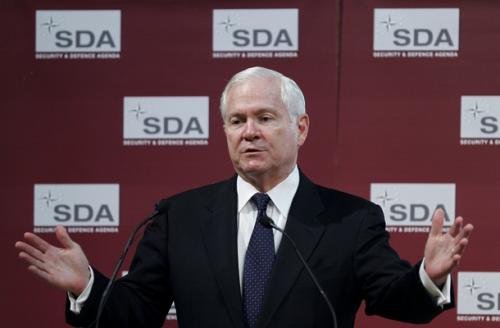 Rumors that Robert Gates would deliver a provocative farewell to the European allies were well founded. Going further than he had to date, he bluntly warned that NATO has become a two-tiered Alliance and said it faces a "dim, if not dismal" future.

Gates has been displaying increasing frustration with the European Allies and pointedly criticized Germany, Poland, Spain, Turkey, and the Netherlands for not carrying their weight in Libya Wednesday. He took it up a notch in today’s speech at SDA, while noting that "I share these views in the spirit of solidarity and friendship, with the understanding that true friends occasionally must speak bluntly with one another for the sake of those greater interests and values that bind us together."

He also presaged his harshest remarks by noting that NATO had "for the most part come through for the mission in Afghanistan," despite his own complaints upon taking office. "Frankly, four years ago I never would have expected the alliance to sustain this operation at this level for so long, much less add significantly more forces in 2010. It is a credit to the brave ISAF troops on the ground, as well as to the allied governments who have made the case for the Afghanistan mission under difficult political circumstances at home." And he promised "no rush to the exits" by the Obama administration or American troops.

That said, "Turning to the NATO operation over Libya, it has become painfully clear that similar shortcomings – in capability and will –have the potential to jeopardize the alliance’s ability to conduct an integrated, effective and sustained air-sea campaign." Notably, "while every alliance member voted for Libya mission, less than half have participated at all, and fewer than a third have been willing to participate in the strike mission. Frankly, many of those allies sitting on the sidelines do so not because they do not want to participate, but simply because they can’t. The military capabilities simply aren’t there."

And it’s not just sheer numbers of soldiers that’s at issue: "In particular, intelligence, surveillance, and reconnaissance assets are lacking that would allow more allies to be involved and make an impact. The most advanced fighter aircraft are little use if allies do not have the means to identify, process, and strike targets as part of an integrated campaign." Worse still, "the mightiest military alliance in history is only 11 weeks into an operation against a poorly armed regime in a sparsely populated country – yet many allies are beginning to run short of munitions, requiring the U.S., once more, to make up the difference."

Gate bluntly declared that his past warnings about NATO turning into a two-tiered Alliance are "no longer a hypothetical worry. We are there today. And it is unacceptable."

He attributed this to a combination of a lack of political will and resources, which have been exacerbated by the economic crisis and the strains of fighting in Afghanistan. Regardless, "For all but a handful of allies, defense budgets – in absolute terms, as a share of economic output – have been chronically starved for adequate funding for a long time, with the shortfalls compounding on themselves each year."

Of course, these complaints aren’t new. But the long-predicted crisis has arrived.

Gates noted, "I am the latest in a string of U.S. defense secretaries who have urged allies privately and publicly, often with exasperation, to meet agreed-upon NATO benchmarks for defense spending. However, fiscal, political and demographic realities make this unlikely to happen anytime soon, as even military stalwarts like the U.K have been forced to ratchet back with major cuts to force structure. Today, just five of 28 allies – the U.S., U.K., France, Greece, along with Albania – exceed the agreed 2% of GDP spending on defense." And, he correctly added, "Regrettably, but realistically, this situation is highly unlikely to change."

So, rather than continue to flail against the inevitable, Gates said the focus should shift from spending levels to spending priorities.

"Though some smaller NATO members have modestly sized and funded militaries that do not meet the 2 percent threshold, several of these allies have managed to punch well above their weight because of the way they use the resources they have. In the Libya operation, Norway and Denmark, have provided 12 percent of allied strike aircraft yet have struck about one third of the targets. Belgium and Canada are also making major contributions to the strike mission. These countries have, with their constrained resources, found ways to do the training, buy the equipment, and field the platforms necessary to make a credible military contribution."

Alas, he added, "These examples are the exceptions. Despite the pressing need to spend more on vital equipment and the right personnel to support ongoing missions – needs that have been evident for the past two decades – too many allies been unwilling to fundamentally change how they set priorities and allocate resources. The non-U.S. NATO members collectively spend more than $300 billion U.S. dollars on defense annually which, if allocated wisely and strategically, could buy a significant amount of usable military capability. Instead, the results are significantly less than the sum of the parts. This has both shortchanged current operations but also bodes ill for ensuring NATO has the key common alliance capabilities of the future."

He touched on some suggestions for stretching defense dollars by consolidation and smart initiatives. Still, he argued, “’Smart Defense’ initiatives are not a panacea. In the final analysis, there is no substitute for nations providing the resources necessary to have the military capability the Alliance needs when faced with a security challenge. Ultimately, nations must be responsible for their fair share of the common defense."

After heaping all this bitter medicine on the European audience, he added another spoonful of sugar: "With respect to Europe, for the better part of six decades there has been relatively little doubt or debate in the United States about the value and necessity of the transatlantic alliance. The benefits of a Europe whole, prosperous and free after being twice devastated by wars requiring American intervention was self evident."

But Gates warned that consensus is under strain, delivering his most powerful shot: "Some two decades after the collapse of the Berlin Wall, the U.S. share of NATO defense spending has now risen to more than 75 percent – at a time when politically painful budget and benefit cuts are being considered at home. The blunt reality is that there will be dwindling appetite and patience in the U.S. Congress – and in the American body politic writ large – to expend increasingly precious funds on behalf of nations that are apparently unwilling to devote the necessary resources or make the necessary changes to be serious and capable partners in their own defense."

Ultimately, Gates judged, "Future U.S. political leaders– those for whom the Cold War was not the formative experience that it was for me – may not consider the return on America’s investment in NATO worth the cost."

In order to prevent that eventuality from happening, Gates urged European leaders to better protect defense budgets from austerity measures, better allocate and coordinate their limited resources, and follow through on "commitments to the alliance and to each other."

Having written much the same over the years, I’m not going to argue much with the Secretary. Indeed, Gates is correct on all fronts. When 23 of 28 Allies won’t meet the 2 percent target that they’ve promised each other, it’s a major problem. As Secretary General Rasmussen has noted time and again: 2 percent is 2 percent, so cries of "austerity" don’t mean much. Nor is the trend likely to reverse itself any time soon, as European publics–especially those in Rumsfeld’s "Old Europe"–simply don’t see their security threatened. And, while American political leaders have been moaning about free riding Europeans for decades, the incentives have changed enough that they might actually do something about it now.

On the other hand, America remains a superpower that sees its interests as truly global. Our defense budget will likely remain massive for decades to come, simply because the ability to project power any where, any time is central to our self-conception. It’s not at all clear that there would be significant cuts in America’s defense budget if the Europeans suddenly stepped up. To paraphrase Cap Weinberger, They cut, we spend. They spend, we spend.

It would obviously have been a great relief if the Europeans had shouldered more of the burden in Afghanistan. But it was our fight, not theirs; they were there, in most cases against the strong wishes of the people who elected them to office, because we asked. We’d have fought it exactly the same way in their absence. In that light, every European and Canadian soldier was a bonus.

Libya is a different story. The Obama administration clearly had little desire for that fight–indeed, Gates himself issued prescient warnings–and got shamed into it by our French and British allies. The hope was to take the lead in the early days providing "unique assets" at America’s disposal and then turn the fight over to the Europeans. But, as Gates’ predecessor noted, one goes to war with the army they have, not the one they wish they had.

The diminished capabilities of the Europeans, spent by nearly a decade in Afghanistan, were of no surprise. The fact of the matter is that NATO entered into Libya with no real plan for an end game beyond hoping the rebels would somehow win or Gaddafi would somehow fall. That’s a collective responsibility, not the fault of the Europeans alone.

Is it frustrating that the Europeans don’t have the stockpiles of munitions needed for even a modestly sustained fight? It is. Again, I’ve expressed that frustration myself. But it shouldn’t have been a shocker, either.

Ultimately, the United States agreed to this fight while at the same time insisting on the ridiculous caveats that we blasted the Germans for in Afghanistan and Gates is blasting Germany, Poland, Spain, Turkey, and the Netherlands for now. (Which is especially odd in the case of Germany and Poland, who were adamantly against joining the fight in the first place.) So, while we have every right to chide the Europeans for biting off more than they could chew and needing America to bail them out, it’s worth keeping in mind that we volunteered for this.