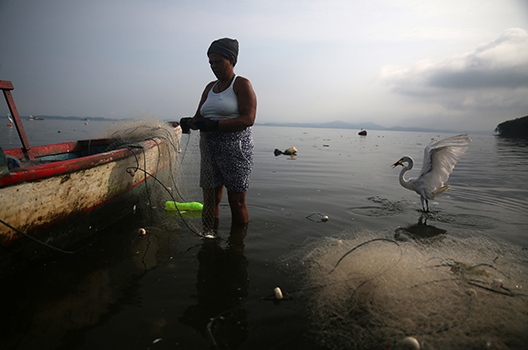 A woman takes fishes out of a fishing net at the Bancarios beach, ahead of World Water Day, in the Guanabara bay in Rio de Janeiro, Brazil March 15, 2017. (REUTERS/Pilar Olivares)

In the coastal state of Odisha, India, female farmers have turned a crisis into an opportunity.

Cyclones, sea-level rise, and increasing water salinity have devastated their communities and turned swaths of fertile ground into wasteland. For years, these women lost income, their health and nutrition suffered, and they found themselves ever more marginalized.

Then, through a development program focused on gender, they came up with simple, innovative solutions that helped to transform their communities. Two of these innovations were mangrove nurseries and floating gardens.

Run by women, the mangrove nurseries gave people an income from growing trees to rehabilitate forest wetlands. The forests act as natural bio-shields against the tidal surges of severe storms and protect the life and property of coastal communities. Rich in biodiversity, they provide goods and services such as food, materials, and aquaculture. They are also powerful carbon sinks, vital for battling climate change.

Women also established floating gardens to combat water and land salinity. These micro-farms are made of bamboo and a culture bed of local materials like dried water hyacinth, manure, compost, and silt. On them, they grow spices and vegetables, providing food security and a source of income.

These innovations came about because local development practitioners set up village committees with an equal number of local women and men as members. Women became more empowered to highlight the challenges they faced and thus were in a better position to solve them. The program is called Paribartan—which means “transformation”—a fitting moniker given that the lives of whole communities are being radically changed for the better.

The success of this focus on gender is by no means a one-off. A grassroots women’s recycling cooperative in Yucatán, the peninsula which separates the Gulf of Mexico from the Caribbean Sea, gained national recognition by radically improving solid waste management and inspiring hundreds of people in dozens of coastal communities to join wetlands and beach cleanup projects to tackle the scourge of plastic waste.

In the Philippines, gender mainstreaming has reduced poverty and led to integrated fisheries management techniques which combines fish production, mangrove development, and the regeneration of coastal biodiversity while providing options for increasing income and food security for poor fisher households. Like the cases of women in Odisha and Yucatán, these innovations were highlighted in research this year from UN Environment.

People are realizing the importance of gender across all sectors of ocean activities. The United Nations’ International Maritime Organization and World Maritime University are driving change to address the gender gap in the maritime, ports, fishing, and related industries. In May, an international, all-female expedition team was launched by National Geographic, the Wildlife Institute of India, and the University of Dhaka to study and better understand how plastic waste travels from source to sea along the Ganges River. The team aims to fill critical knowledge gaps around plastic flow and develop holistic and inclusive solutions.

June 8 marks the 11th Annual World Ocean Day. We want to highlight the vital role that gender equality has to play in conserving humanity’s most important and most under-appreciated treasure: the ocean.

The oceans feeds us, give us air to breathe, and are vital for lives and livelihoods across the world. They guarantee our existence on this planet and hold the key to overcoming some of our most pressing challenges, such as combating climate change and producing enough food sustainably for 10 billion people by the middle of this century. This is why countries agreed to a comprehensive, universally agreed plan to protect the ocean: Sustainable Development Goal (SDG) 14 “Life below water” and its ten specific targets.  We want to show that a focus on gender will help us meet these targets.

In the fisheries sector, for example, women constitute about half the workforce. Yet they are largely concentrated in low-skilled, low-paid, seasonal jobs without labor rights protections. Men are more frequently involved in offshore and high-value fisheries, according to the UN Food and Agriculture Organization and make up 81 percent of those involved in fish and aquaculture harvesting. Women, on the other hand, are overwhelmingly (90 percent) involved in secondary fields such as fish processing. They earn approximately 64 percent of men’s wages when carrying out the same work in aquaculture. Whilst women often depend on the sustainability of local resources, as men do, they frequently have a minimal voice in the governance of those resources.

Ocean challenges could be tackled using similar solutions to other industries and sectors developing gender equality. The value of bringing women into the heart of solving major issues has been demonstrated in the agriculture sector globally. Women play an essential role in food production; when women are given land rights, seeds, technical training, and access to markets, food productivity can rise by more than 20 percent, according to the UN Food and Agriculture Organization. It stands to reason that a parallel improvement in productivity and sustainable livelihoods could be found in fishing and aquaculture.

To solve the challenges facing the oceans, gender parity has to be embedded in the solutions. There are many government and non-profit organizations, philanthropists, scientists, and entrepreneurs doing critical and unheralded work to protect our oceans. By focusing on gender, we can transform this into a tidal wave of public, private, and community support for securing the healthy future for our oceans.

SDG 14 and the health of our planet are substantially less likely to be attained if we ignore 50 percent of the population who can help us secure it. Gender must be embedded in everything we do to protect and sustainably use our oceans.

Peter Thomson is the United Nations Secretary General’s Special Envoy for the Ocean. Isabella Lövin is the deputy prime minister of Sweden. They are co-chairs of the Friends of Ocean Action, an informal group of fifty-three leaders who are fast-tracking solutions for a healthy ocean. The Friends of Ocean Action is convened by the World Economic Forum and the World Resources Institute.