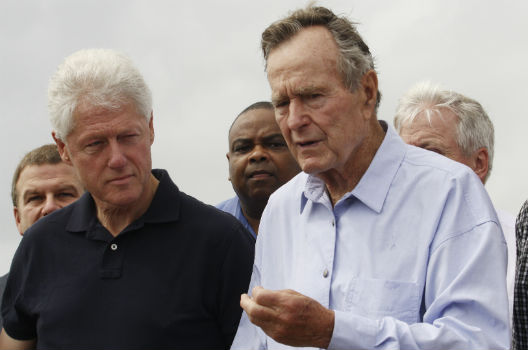 Former US President George H.W. Bush passed away on November 30, 2018. The Atlantic Council remembers his legacy as a champion of transatlantic relations and US global leadership. In 2010, Bush introduced Atlantic Council Distinguished Leadership Award recipient President Bill Clinton. This is a transcript of his remarks.

Good evening.  I’m delighted that the Atlantic Council will give its highest honor tonight, the Distinguished International Leadership Award, to my friend, President Bill Clinton, the 42nd president of the United States.  I’m particularly delighted that the Atlantic Council has allowed me a chance to offer you my own personal congratulations to Bill.

As most of you know, we’ve become quite close these last few years as we’ve traveled the road of being former presidents together and particularly in our disaster relief effort.  I could not have asked for a better partner as we raised money first for the victims of the South Asia tsunami, then Katrina and most recently, Ike. Barbara joked that we were the odd couple and maybe that’s true but for whatever reason, our friendship seems to resonate around the world.

Bill, the Atlantic Council is giving you its Distinguished International Leadership Award because of the legacy of your statesmanship.  As your predecessor and a president who witnessed the fall of the Berlin Wall and the end of the Cold War, I am in a unique position to assess your legacy.  You led the world through the 1990s, helped secure a free, democratic and peaceful Europe, expanded and consolidated the North Atlantic alliance and advocated, very much in line with my own thinking, free trade and economic integration throughout the world.

History will focus on your remarkable actions when the end of Communism, while welcome, presented new and uncertain challenges.  The Balkans and Northern Ireland were two trouble spots where your leadership secured the peace.  You guided our country and our allies through this potentially dangerous but ultimately prosperous and peaceful period which consolidated a Europe whole and free and a more robust NATO.

After your presidency ended, your commitment to public service became even more intense, with the founding of the Clinton Global Initiative, which literally has helped millions of people around the world and I’m very proud that you and my son, President George W. Bush, have continued the role of leading our country in disaster relief, this time for the victims of the earthquake in Haiti.

I also would like to thank the Atlantic Council, which has contributed so much in its close to 50-year history, and to its chairman, Sen. Chuck Hagel, President Fred Kempe and Chairman of the International Advisory Board, my dear friend Brent Scowcroft.  I admire the Atlantic Council for its dynamism, vibrancy and great work, at a time when its mission has never been more important, to renew the Atlantic community and to promote constructive American and allied leadership to tackle our most pressing global challenges.

I especially congratulate you all tonight for the wisdom of recognizing President Clinton on this important evening for all he has contributed to the United States, to the Atlantic community and to the world.  Thank you, President Clinton, on behalf of all of us.

See the full video of President Bush’s remarks from the 2010 Atlantic Council Distinguished Leadership Awards below.

Image: Former US Presidents George H.W. Bush (R) and Bill Clinton (L) speak after the pair looked at damage from Hurricane Ike on the beach in Galveston, Texas October 14, 2008. The former Presidents are spearheading an effort to raise relief funds for the storm devastated Texas Gulf Coast. (REUTERS/Donna Carson)