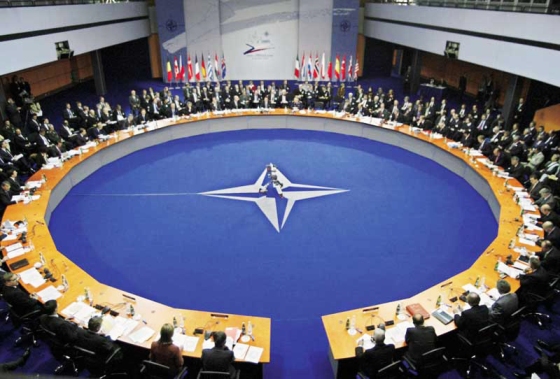 There are still times when Germans must be reminded of history’s lessons.

One of those came after the Sept. 11 attacks, when a courageous Chancellor Gerhard Schroeder risked a no-confidence vote to take German combat troops to Afghanistan. His argument: History’s obligation wasn’t pacifism, as many argued, but a willingness to shed blood against new despots and terror.

Sadly, Germany may fail history’s test this week at the NATO Summit in Bucharest, beginning tomorrow. Chancellor Angela Merkel has led opposition to an alliance membership path sought by Georgia and Ukraine, states that grew out of the former Soviet Union. Though France, Italy and Spain also oppose, U.S. officials see Germany as the chief impediment because the majority of alliance countries are in favor, including all former Soviet bloc members. Merkel’s arguments seem sound at first blush, but they are misguided and dangerous.

Her position: No country should join the North Atlantic Treaty Organization if it has an unresolved territorial conflict with a neighbor (Georgia) or where most of its citizens are against membership (Ukraine). The underlying argument is that NATO shouldn’t risk worsening relations with the region’s biggest power and energy spigot for the purpose of lower priorities.

Further, Merkel sees a window of opportunity for improved relations with Russia in Dmitry Medvedev. She was the first foreign leader to visit the president-elect.

What Merkel forgets is that West Germany itself entered NATO in 1955, when it had one of history’s most-intractable territorial conflicts with the Soviet Union over Berlin, which Georgian President Mikheil Saakashvili brought up with U.S. President George W. Bush last month in Washington. The Soviets saw the move as such a direct threat that they then formed their own military alliance: the Warsaw Pact.

This time around, Russian President Vladimir Putin says he will point nuclear weapons at a Ukraine with NATO ambitions. His foreign minister, Sergei Lavrov, warns that a membership course will only stir up more separatist trouble in Georgia’s breakaway regions of Abkhazia and South Ossetia.

So when Merkel says, as she did March 10, that “countries that are involved in regional or internal conflicts can not become members (of NATO),” she not only forgets her own history but gives the Kremlin a permanent veto on Georgian membership. German Foreign Minister Frank-Walter Steinmeier himself conceded last year that blocking accession on the grounds of unresolved conflicts “will enable third parties to drag out the process endlessly.”

The further lesson of history is that NATO membership ultimately helped West Germany normalize relations with the Soviet Union. Within the security of alliance embrace, West Germany won Russian diplomatic recognition in 1955 and eventually gained reunification as a free and sovereign country.

Germany’s opposition to Ukraine’s request for a membership action plan is just as mistaken. German officials seek solace in polls that show a large majority of Ukrainians oppose NATO membership (unlike Georgia, where more than 70 percent voted in favor in a referendum).

But that misses the point.

German officials are confusing actual membership, which neither Ukraine nor Georgia seeks, with the proposed action plan, which would require a healthy diet of political and military changes that might last a decade before membership. That gives Ukrainian politicians some time to educate their voters about NATO’s benefits — even though Ukraine already participates in a host of NATO operations.

Merkel is right that the West must urgently reach out more effectively to Russia. It isn’t the ideological enemy the Soviet Union was. Its current animosity is rooted in resentment over lost standing and territory following its Cold War defeat. It is a crucial player with rising economic and energy clout.

Bush will meet with Putin on April 6 in Sochi, Russia. Given Putin’s more cooperative tone during a recent visit to Moscow by Secretary of State Condoleezza Rice and Defense Secretary Robert Gates, U.S. officials see a chance for a missile-defense deal and improved relations.

Yet history’s lesson is that frustrating Georgian and Ukrainian ambitions is a price that won’t buy a more cooperative Russia for very long. It can only encourage revisionist thinking that Russia must defend and expand its sphere of influence, when the real challenge is how to make Russia part of a common cause.

German Chancellor Helmut Kohl gained reunification on favorable terms because he kept his country firmly anchored in the West and resisted West Germany’s historical temptation to find middle ground between Russia and its neighbors. If Germany wants to play an historic role now, it must do that again.

It shouldn’t only support Georgian and Ukrainian ambitions, joining forces with its eastern neighbors from Poland to Estonia that are lobbying Germany for such an outcome, but it also should propose a creative course that would deepen the alliance’s links with Russia, with the ultimate goal of that country’s own NATO membership.

A Russian general already sits in NATO headquarters, Russian troops are involved in NATO’s anti-terrorist initiative Operation Active Endeavor in the Mediterranean, and Russia, unlike any other non-alliance member, can communicate through its own NATO- Russia Council.

The NATO Summit will be about many things this week. The alliance will try to deepen its commitment to stabilizing Afghanistan. It will try to extend membership offers to Albania, Croatia and Macedonia. (Sadly, Greece may block Macedonia not due to its qualifications but because it objects to its name.) It will attempt to expand its mandate to energy and cyber threats.

Yet perhaps nothing is more important to the future of the alliance and Europe than how Germany interprets history’s lessons.

Frederick Kempe is president and CEO of the Atlantic Council.  Originally published 1 April 2008 by  Bloomberg News. Reprinted with permission.