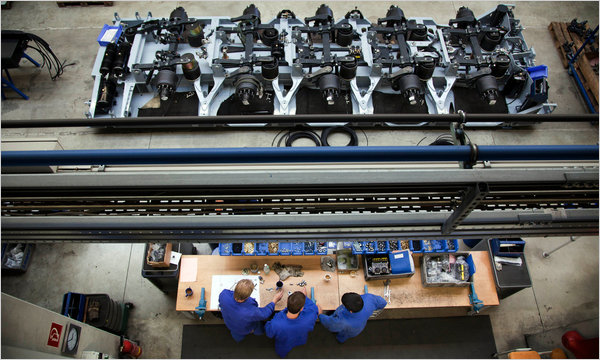 Many of the world’s largest economies, the U.S. included, have trumpeted the necessity of increasing spending to jumpstart growth. Meanwhile Europe’s largest economy, Germany, defiantly stuck to its plan of spending cuts, limited unemployment benefits, and a focus on exports.

Though widely questioned for its economically conservative policies, Germany is now having the last laugh: its economy grew 2.2% in the second quarter of 2010, the largest level of growth since the country reunified and far surpassing expert forecasts. Germany’s growth significantly outpaced that of neighboring France (0.6%), the UK (1.1%), and even the United States (0.6%).

Germany’s efforts to encourage companies to keep workers employed, as opposed to increasing spending on supporting them once they lose their jobs, are seen by multiple media analyses as key to its economic recovery. With help of a government funding program called “Kurzarbeit” or short work, employers could grant workers extended leaves of absence or cut back on their hours instead of firing them, keeping them employed and productive. Nicholas Kulish of The New York Times observes, “by paring unemployment benefits, easing rules for hiring and firing, and management and labor’s working together to keep a lid on wages, Germany ensured that it could again export its way to growth with competitive, nimble companies producing the cars and machine tools the world’s economies—emerging and developed alike—demanded.”

What’s more, Germany’s willingness to go it alone on the economy may even be reflective of a change in the psyche of the entire country, as stated by Kulish: “[Germany] has also become less obsessed with its historical crimes and more enthusiastic about its economic model, its culture and its improved standing in the world.”

The Times’ analysis also draws attention to how Germany’s recent success has caused confrontation with fellow European nations and common currency partners trying to regain their economic footing. “As the latest numbers show, Germany is outproducing its neighbors by wider and wider margins, raising fears of a two-speed Europe that could render the common regional currency unstable.”

Despite its recent success, Germany is not out of the woods yet. Many economic analysts believe that as Germany’s economy has performed so well in the last few months, there’s nowhere to go but down. Jennifer McKeown, senior European economist at Capital Economics, remarks that “the German recovery will weaken as global demand slows and its own fiscal consolidation begins next year.” According to Financial Times, German growth “is likely to slow in the remainder of the year, when government austerity measures kick in and companies’ inventory restocking is expected to wane.” Germany is also very dependent on exports to China, and its economic performance will suffer from a slowdown in China’s economy (which is already underway).

While being rightfully cautious about what the second half of 2010 will bring, Germany has much to celebrate. “Many plants are running at full speed again, some companies are expanding capacity and many are re-hiring contract workers. Orders in the engineering sector, Germany’s economic backbone that includes industrial giants such as Siemens as well as swaths of midsized family-owned companies, shot up by 32 per cent year-on-year in the first six months, following a drop of 38 per cent in the past year.” German manufacturing giant Siemens reported an order backlog of €89 billion in July, a record high in the company’s illustrious 163 year history.

Will others in Europe admit they were wrong and learn from Germany’s example? In a blog for the Guardian, Ruth Sutherland writes that Germany’s growth “is a testament to a business culture that has respect for manufacturing, and where exporters such as BMW or Bosch do not rely on a cheap currency to sell goods abroad but on the excellence of their products.”

Sutherland continues that while the UK is desperate for smaller firms to create jobs and rebalance the economy, “in Germany it is starting to happen: according to its chambers of commerce, Mittelstand companies [Germany’s small and medium-sized businesses] want to create up to 100,000 jobs by the end of the year, and are also pushing green technology.”

She concludes that Britain’s manufacturing industry has survived “in spite of the business culture of the past 30 years rather than because of it. Shouldn’t we be asking what we can learn from the Germans?”

The same question can be asked for the American economy: what can we learn from the Germans? While government spending in the U.S. has resulted in only tepid improvement, the growth in Germany should speak for itself. Focusing spending on keeping people employed, rather than supporting people who are not, could result in a smoother ride for the U.S. on the economic roller coaster. Given Germany’s success with this strategy, isn’t it worth a try?

Scott Bleiweis is an intern with The Atlantic Council and contributor to its web publications, New Atlanticist and NATOSource. He is currently pursuing a masters degree in International Studies with the Korbel School of International Studies at the University of Denver. Photo credit: New York Times.