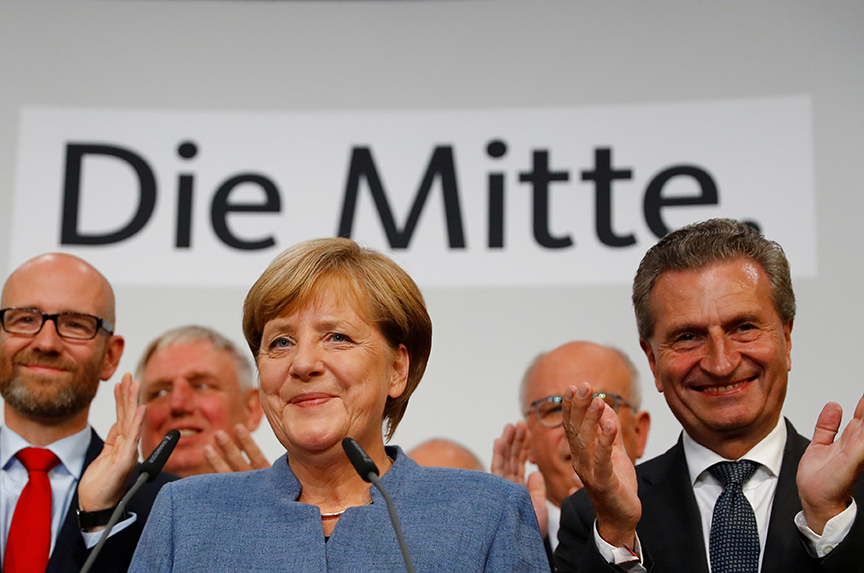 German Chancellor Angela Merkel’s party came in first, which is good news. But the strong showing by the far-right Alternative for Germany (AfD) in elections on September 24 is evidence of the fact that the nationalist wave remains a significant factor in Europe, according to the Atlantic Council’s Daniel Fried.

“The populist and anti-liberal wave, which many had optimistically concluded had crested and was in decline in Europe after the French, Dutch, and Austrian elections is still a significant factor in European politics,” said Fried, a distinguished fellow in the Atlantic Council’s Future of Europe Initiative and Dinu Patriciu Eurasia Center.

“The bottom line is that the election outcome is not the best, but it’s also not the worst,” said Fried, who, in his forty-year career in the Foreign Service, played a key role in designing and implementing US policy in Europe after the fall of the Soviet Union.

German Chancellor Angela Merkel was elected to a fourth term on September 24, while the AfD became the first far-right political party to enter parliament since World War II, according to an exit poll for public broadcaster ARD.

Merkel’s conservative Christian Democratic Union/Christian Social Union (CDU/CSU) alliance remains the largest political party in parliament with 32.5 percent of the vote, according to the ARD poll. Its coalition partner, the Social Democratic Party of Germany (SPD) led by Martin Schulz, placed second with 20 percent of the vote. This was the SPD’s worst performance since World War II.

The nationalist, anti-immigrant, anti-Islam AfD emerged as the third-largest party in parliament with 13.5 percent of the vote.

Merkel will now set about building a ruling coalition. The SPD’s Schulz, who broke with Merkel ahead of the elections, reiterated after the vote that his party will not be joining the CDU/CSU. Schulz’s decision means that the SPD, and not the AfD, will be the main opposition party in Germany.

This leaves Merkel with the so-called Jamaica option. The term gets its name from the colors of the three parties: black (CDU/CSU), yellow (the liberal Free Democratic Party—FDP), and green (Green Party), which are also the colors of the flag of Jamaica.

“A Jamaica coalition is most likely, but apart from the coalition, it does suggest that the centrist forces in Germany are going to be somewhat on the defensive,” said Fried.

Daniel Fried spoke in a phone interview with the New Atlanticist’s Ashish Kumar Sen. Here are excerpts from our interview.

Q: What is the significance of the outcome of the German election?

Fried: The bottom line is that the election outcome is not the best, but it’s also not the worst. It shows two things. One, that the populist and anti-liberal wave, which many had optimistically concluded had crested and was in decline in Europe after the French, Dutch, and Austrian elections is still a significant factor in European politics. That is of concern.

The second thing it shows is that despite the fact that Merkel’s party came in first by a long way, the two centrist German parties in power suffered losses compared to their last showing.

We will see what coalition emerges. A Jamaica coalition is most likely, but apart from the coalition, it does suggest that the centrist forces in Germany are going to be somewhat on the defensive. The trends in Europe and the United States that have given us nationalist and nativist parties growing in prominence though often falling short is still a factor.

But you’re not going to get an extremist-led government in Germany. [The election result] is not the kind of electoral shock that has landed the Brits in the terrible position that they are in with Brexit.

The outcome will put a lot of burden on the chancellor in her final term in office to strengthen the center. Frankly, the conclusion that I draw from that is that the centrist and liberal forces—the forces that back the free world and the free world order—cannot be complacent. We need to run hard and run a little bit scared if we are going to beat back nationalism.

Q: What does the outcome mean for the transatlantic relationship and for Germany’s role in Europe?

Fried: The chancellor is a pillar of a European Germany that is a critical force in Europe and a force for good. One piece of big good news is that she remains chancellor.

A second piece of good news is that as far as Russia policy goes, the Greens have actually been consistently stronger in their policy toward approach toward Russia than the Social Democrats. I know a number of Green politicians and they are good on Russia. They seem to look upon Russia as a reactionary and aggressive power. They do not look on Russia through a prism of sentiment and guilt, which is good.

And three, I think that the German-American relationship is going to be colored by the complexities of the Trump administration, which as far as anyone can tell now is conducive to a transatlantic policy that is in fact better than it mostly sounds.

Relations may have bumps because of the president’s personal style, but I think that the basics of the transatlantic policy under Trump are in reasonably decent shape. They’re doing the right thing on NATO policy, our sanctions policy toward Russia is consistent with the Obama policy, and on trade and economic relations, the administration has not turned away from TTIP. So, the basics are still intact and there is a basis for continued cooperation. It will be more difficult if the US administration indulges in rhetoric that complicates its own policy, but I think there is, if not optimism, a basis on which to do solid work.