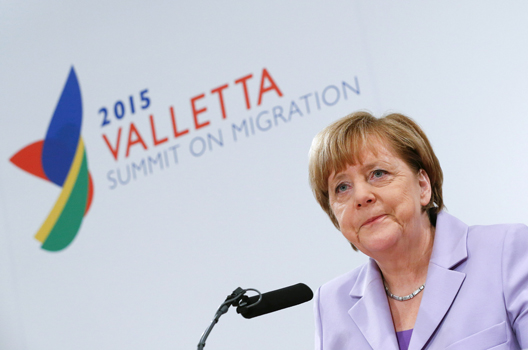 Explicitly invoking the US aid initiative that rebuilt Western Europe’s devastated infrastructure and weakened economies after World War II as a bulwark against Communist expansionism, the German government unveiled its ambitious framework for a “Marshall Plan with Africa” (Eckpunkte für einen Marshallplan mit Afrika) on January 18 with the twin objectives of increasing trade and development on the continent and hopefully reducing mass migration flows north across the Mediterranean.

Presenting the thirty-four-page blueprint, officially entitled “Africa and Europe—A New Partnership for Development, Peace, and a Better Future” (Afrika und Europe—Neue Partnerschaft für Entwicklung, Frieden und Zukunft), Federal Minister for Economic Cooperation and Development Gerd Müller argued, “Africa’s fate is a challenge and an opportunity for Europe. If we do not solve the problems together, they will come to us at some point.” Müller’s sentiments echoed concerns in the International Labour Organization’s World Employment and Social Outlook Trends 2017 report earlier this month that estimated that number of unemployed Africans would increase by at least 1.2 million this year and warned that “failure to promote decent work opportunities also risks creating further incentive for workers to leave the region permanently” and head for Europe.

The German offer of development assistance for Africa to help deter migration is the latest such proposal since the Valletta Summit on Migration in November 2015 set up a €1.8 billion emergency trust fund to help development in African countries and encourage them to take back migrants who reached Europe. Last month, Dutch officials announced that the European Union had reached a deal with Mali stipulating that the West African country would receive an aid package in return for taking back citizens whose asylum claims had been rejected. Whether the aid spurs growth in African economies and whether greater prosperity, at least in the short- and medium-term, actually curtails migrant flows, are different questions which may or not be answered when European Union (EU) leaders convene again in Malta next month. An outstanding concern is how to address countries that do not cooperate in taking back their citizens. Some in Germany’s governing coalition have suggested the aid to these countries be cut, raising the issue of lack of “sticks,” or penalties, in Müller’s approach. The same questions will become a recurring theme when the G7, a group comprised of the United States, Canada, France, Germany, Italy, Japan, and the United Kingdom, convene in May in Taormina, Italy, for a summit focused on Africa and migration.

In any event, according to its drafters, the Marshall Plan for Africa will concentrate on fair trade, increased private investment, bottom-up economic development, entrepreneurship, and job creation and employment. While emphasizing African development, the German government did not ignore the opportunities which fast-growing African economies present to German businesses. Citing data showing that 400,000 German companies were active internationally, but only about 1,000 did business in Africa, Müller lamented: “We cannot leave Africa to the Chinese, Russians, and Turks.” Without providing specifics, the plan envisions a shift of development funding to leverage private capital: “Public funding can be used to directly boost private investment in Africa… Every euro of tax revenue can leverage many more euros in private capital. And then investing becomes attractive even for large institutional investors such as insurance companies or pension funds,” said Müller.

In addition to foreign aid and foreign direct investment, the German government document acknowledged that African governments need to do a better job fighting corruption, mobilizing financial resources within their countries, and strengthening their own capacity to generate revenue. “It is hard to explain why the tax ratio in the poorest African countries should still be below 17 percent when it stands at an average 35 percent in [Organization for Economic Cooperation and Development] OECD countries, or why education budgets are chronically underfinanced in many African countries despite them selling their natural resources.” Consequently, the Germans proposed that “together with other European and international players we want to forge incentive-based reform partnerships with the reform champions among African states, thereby creating incentives for faster, sustainable development.” Henceforth, Germany will endeavor to “make the instruments of development policy more flexible” and move “away from the blanket approach to development cooperation and provide targeted support to reform-minded countries.” The Economic Cooperation and Development Ministry indicated that 20 percent of Germany’s assistance to Africa would, going forward, be reserved for reform-minded partner countries.

Müller also proposed a “Mediterranean Union” that would give Morocco, Algeria, Tunisia, Libya, and Egypt access to the European Union’s internal market as a first step towards a free-trade zone embracing the EU and Africa’s fifty-four states.

Africa is the focus of the current German G20 presidency and the Marshall Plan for the continent will likely figure prominently in the G20 summit in Hamburg in July. The European Union is likewise working on a new Africa strategy ahead of the EU-Africa Summit, scheduled for November. Whether the Germans and other European countries—including France, which just concluded the twenty-seventh Africa-France Summit a week ago—will ultimately find the money and the political will necessary to implement their big plans for Africa remains to be seen. Nevertheless, they are already exercising what US President Donald Trump described in his inaugural address as “the right of all nations to put their own interests first” in recalibrating their relations with Africa. If the United States is to pursue a foreign policy of “America First,” then there is a lot of catching up to be done in bringing the public and private sectors together to forge a robust US approach to the new Africa, whose rising geopolitical importance and burgeoning economic dynamism ought to make it a strategic priority in the new administration, even without the threat of migrant waves that weigh so heavily on European calculations.

J. Peter Pham is vice president of the Atlantic Council and director of its Africa Center. Follow the Africa Center on Twitter @ACAfricaCenter.

Image: German Chancellor Angela Merkel addresses a news conference after the Valletta Summit on Migration, followed by an informal meeting of European Union heads of state and government in Valletta, Malta, November 12, 2015. The European Union launched a fund for Africa on Thursday with an initial $2 billion to combat the poverty and conflict driving migration to Europe, but African leaders said more fundamental economic change was needed. (Reuters/Yves Herman)