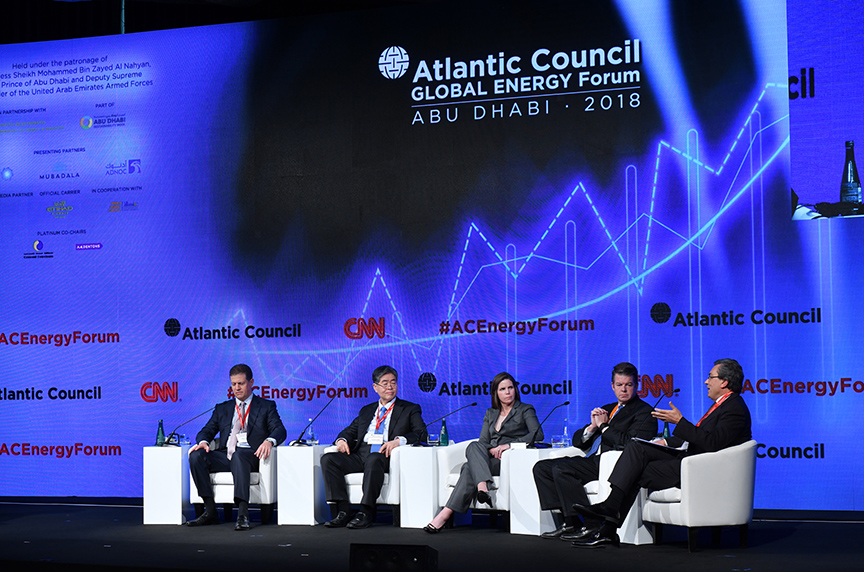 New York City’s lawsuit against the Big Five oil companies holding them accountable for the destruction of the city caused by climate change-related storms makes apparent that the energy industry must change course in 2018 in order to sustain investment and production, according to a top official at a major petroleum company.

“The oil and gas companies are being sued and blamed for climate change like the cigarette companies were blamed for cancer,” Majid Jafar, chief executive officer of Crescent Petroleum, said at the Atlantic Council’s Global Energy Forum in Abu Dhabi on January 12. “I believe in climate change, but we’re not going to get there with slogans and politics.”

On January 11, the New York City government sued BP, Chevron, Conoco-Phillips, ExxonMobil, and Royal Dutch Shell, for the cost of past and future damage to the city’s infrastructure caused by storms such as Hurricane Sandy in 2012. These storms can be tied to climate change which the lawsuit lays at the feet of these major oil companies.

Jafar said that the energy industry, particularly the oil and gas sectors, must do more to project the message that they are doing a great deal to combat climate change. He described how natural gas, such as that widely produced in the United States, and renewables are complimentary energy sources. Yet the anti-fossil fuel agenda has caused many to categorize gas alongside oil and coal when they are not the same.

How well they are able to alter that perception and induce investment to lift the industry out of its current price slump will prove indicative of the future trajectory of the oil and gas sectors, he said.

Jafar joined a group of fellow chief executive officers (CEOs) including Ayman Asfari, CEO of Petrofac; Meg Gentle, CEO of Tellurian Inc.; Hunter L. Hunt, chairman and CEO of Hunt Consolidated Energy; and Younghoo David Kim, chairman and CEO of Daesung Energy Group and chair of the World Energy Council, to discuss the energy industry’s response to climate change and other major trends facing the sector in 2018. Summer Said, a correspondent at the Wall Street Journal, moderated the discussion.

“Despite all the negative headlines, look for the trend lines,” said Jafar. He described how Germany, for example, is focused on a turn to electrification, but has seen steadily rising carbon emissions due to its continued use of coal. By contrast, the United States boasts the lowest emissions levels in years as a result of its increasing use of natural gas instead of coal.

“When we talk about the energy challenge, this is a challenge for all of us working together,” said Asfari. He called for collaboration across all sectors within the energy industry to stabilize the markets and implement meaningful, positive change for those both within the world of energy work and those most affected by it.

A key trend is the industry’s investment in the fight against climate change and the turn to renewables, which also has significant practical advantages for the market.

Against backdrop of low oil prices driven by a boom and bust cycle, these energy leaders agreed that the industry needs to make a fundamental shift, and renewables will play and important role in the pivot.

However, the Organization of the Petroleum Exporting Countries (OPEC) remains preoccupied with the price of oil in global markets, currently trending on the lower end of the spectrum at about $70 per barrel. To address the prices, which plummeted in recent years, OPEC enforced strict production cuts on all participating countries. While these measures have helped stabilize the markets, Kim said these attempts to keep oil prices afloat are a short-term fix.

“It’s almost inevitable that with the drive for renewable energies, this drive to bolster oil and gas prices can’t be sustainable,” he said.

Rather, according to Hunt, what is necessary for increased investment in energy, particularly from the private sector, is stability, provided by renewables. Hunt described how, by steering clear of the boom and bust cycle inherent in the oil industry, renewable energy sources give markets a certain level of predictability needed for investment. This will be necessary for the energy sector moving forward, he said.

The trend toward successful integration of cleaner energy sources can be seen in the success of US natural gas.

Natural gas, and the portable liquefied natural gas (LNG), exploded onto the world scene, and, despite initial skepticism, it is clear that this source of energy is here to stay, said Said.

Gentle described the expanding sources and capabilities of the LNG sector and the maturation of the product on the global market. The $70 per barrel average creates a climate for increased US drilling because “we see today that we can produce gas in the United States for less than a dollar,” she said. Gentle added that “with the commoditization of LNG, buyers can get a cargo of gas any time they need it,” because “we can bring it to the world market very cheaply.”

By providing a readily available alternative to oil, “LNG is starting to be an adult commodity,” she said.

“I don’t think we’ve seen the climax of US production,” said Gentle.

However, she said, this is dependent on the sustainability of investment in natural gas infrastructure.

“The systematic under-investment in LNG infrastructure means we’re about to see a tight global gas market,” cautioned Gentle. “Infrastructure investment has to happen,” she said.

Jafar, too, warned against underinvestment in the oil and gas sectors stemming from misplaced political fears tied to the global climate change agenda. “If the sources of capital are drying up for political reasons, then we have a real problem,” he said.

According to Jafar, the buy-in for natural gas investment will come not from geopolitical climate change ambitions, but the demands of local populations. He said “the biggest event of 2017 was both China and India, at the highest levels, taking a policy decision to very rapidly increase the natural gas share.”

Jafar described how this decision “was not be cause of a global climate change agenda, but because of local pollution in the cities.”

The panelists agreed that China and other rapidly growing Asian markets will prove to be powerful players on the world energy stage in the coming years.

Gentle described how “Asia overall is about 75 percent of the LNG market, so it contributes to most of the growth.” She said US markets will need to increase LNG liquefaction capacity by over 100 million tons in order to meet the rising demand produced by the Asian market. A great deal of this growth can be attributed to Chinese public policy which Gentle called “absolutely incredible.”

By turning away from coal—which is still used to power homes in many areas of rural China—the country has been able to bring significant positive changes to its people and reduce its dependence on fossil fuels.

According to Gentle, this change will endure. “I don’t think people, once they’ve converted to electricity, will go back to shoveling coal into their homes.”

Other alternative markets can play a significant role as well. According to Gentle, the Middle East “is a very important region for the future of the LNG market.”

Jafar said that the Middle East, a traditionally oil-producing region, “needs to learn form what’s happened in these major economies,” that have increasingly integrated natural gas. He advocated energy investments in emerging sectors which can last twenty-five to thirty years and rise about the rapidly changing geopolitical instability.

“We’re punching way below our weight and we have a lot to be done to achieve our potential,” he said.