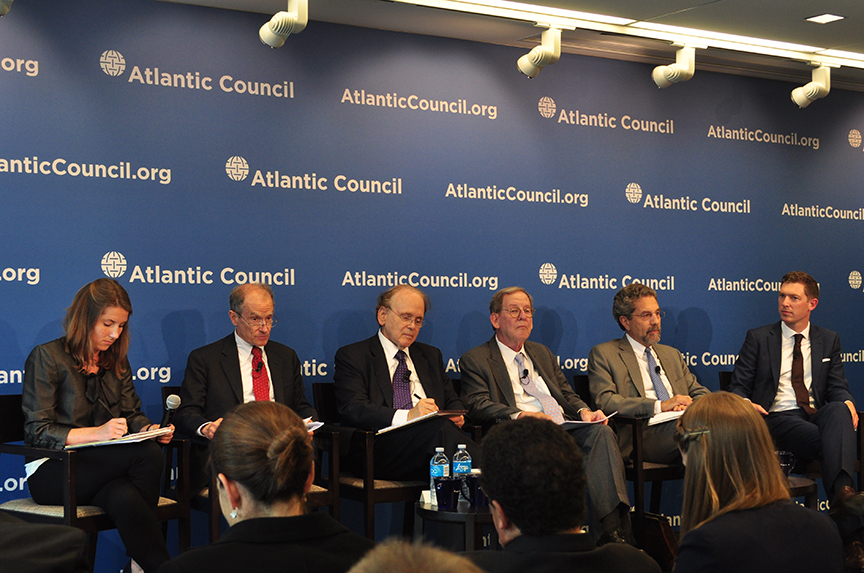 A consensus is emerging among Washington experts that the current draft legislation in the US Congress to expand sanctions against Russia should—and could—be refined to avoid a number of potential unintended consequences.

In a panel discussion at the Atlantic Council on July 19, Daniel Fried, who as the State Department’s coordinator for sanctions policy in the Obama administration led the US sanctions effort against Russia, argued: “I think the legislation is more or less a good thing. If I could, I would make modifications based in part on some of the observations I’ve heard from Americans and observations from the European Union. And I think there is more than enough room in this bill to do what the drafters and what the sponsors intended without weakening it, but also taking care of what I consider some legitimate, if rhetorically exaggerated, European concerns.”

The sanctions as written would have negative implications for US companies operating overseas, and for energy sector jobs at home, according to the panel’s participants, including Richard L. Morningstar, a former US ambassador to the European Union (EU) and special envoy for Eurasian energy, and Daniel Yergin, an energy expert and vice chairman of IHS Markit.

More broadly, the panel expressed varied opinions on how Washington should interact with Moscow. Nonetheless, they agreed that sanctions against Russia are both warranted and valid, but that the measures outlined in the legislation and the unilateral nature of their potential imposition are problematic.

As Morningstar, who is the founding director and chairman of the Atlantic Council’s Global Energy Center, put it, the question is not whether to sanction Russia, but rather “what form those sanctions should take.”

As currently written, the legislation could negatively impact the authority of the Treasury’s Office of Foreign Assets Control (OFAC), which administers and enforces sanctions to support diplomacy and correct inadvertent errors. OFAC’s regulatory licensing authority is crucial, and restricting it would remove a necessary safety net and hamper flexibility. The only instance in which this authority has been limited is with respect to Cuba, which, according to David Mortlock, a nonresident senior fellow in the Atlantic Council’s Global Energy Center, has since resulted in a “massive headache for both sides of the aisle.” Potentially even more worrisome is the deterrent effect this could have on the use of sanctions as a tool—absent the ability to use licensing to address unintended consequences, any administration might be reluctant to impose sanctions in the first place.

While the OFAC issues are worth considering for sanctions policy more broadly, perhaps the most critical set of unintended consequences in the bill would impact the energy sector.

The energy provisions outlined in the current legislation could potentially undermine international energy projects around the world which support European energy security or where the involvement of state-owned or private Russian companies is not material. More specifically, the expansion of Directive Four to include restrictions on cooperation with Russian energy firms on projects outside of Russia is problematic and counterproductive in correctable ways.

By prohibiting US involvement in projects where any Russian company is involved, the Senate version of Directive Four potentially extends sanctions to include projects in the Caspian Sea region and elsewhere in which Russian firms play a minority role, working at cross purposes to the overall intention of the legislation by undermining projects that provide alternative energy supplies to Europe. According to Fried, who is a distinguished fellow at the Atlantic Council, the provision should be changed to avoid inadvertently giving “the Russians the ability to inject poison pills into otherwise perfectly legitimate international energy projects.” The bill as written could place undue burden on US energy and service companies, and even technologies companies, that operate globally and in partnership with other companies and consortiums.

Ultimately, what this would look like in practice remains unclear, leaving a cloud of uncertainty hanging over energy cooperation and consortiums from Kazakhstan to the Caspian to Africa. This uncertainty could be debilitating for companies, forcing fire sales of US ownership interests while Russian companies could remain. The threat of pipeline sanctions could be detrimental to financing the pipelines that compete with Russian gas. “Even the threat of sanctions could seriously undermine the project,” Morningstar warned, and “what a gift to give to the Russians to eliminate a competitive source of gas.”

Finally, the unilateral nature of the potential implementation of the sanctions, in sharp contrast to the multilateral sanctions currently in place, which were developed in concert with European allies, would make them far less effective. Cooperation is key to effectiveness. As Morningstar put it bluntly, “we have to recognize that unilateral sanctions generally don’t work.”

At the end of the day, while the intention behind the current legislation is legitimate, and cyber and other sanctions are even essential, the substance in the energy sector provisions, as currently drafted, is problematic, and threatens to undermine the very purpose the bill is intended to serve. As Jeffrey Turner of Squire Patton Boggs noted, the legislation is a product of “politics, not policy.” Despite the varying degrees of hawkishness with respect to sanctions, diverging views on how to approach Moscow, and professional perspectives, the panelists were in agreement on a key conclusion—that the bill as written should be improved. With the House still refining its counterpart to the Senate bill, there is still time for improvements.

“Bottom line, I think the senators that pushed through this bill were trying to do the right thing for the right reasons, and the amendments that I and others have discussed should be done to make this bill workable rather than kill it. And I think there is that space,” said Fried.

Ellen Scholl is the associate director of the Atlantic Council’s Global Energy Center. You can follow her on Twitter @EllenScholl.