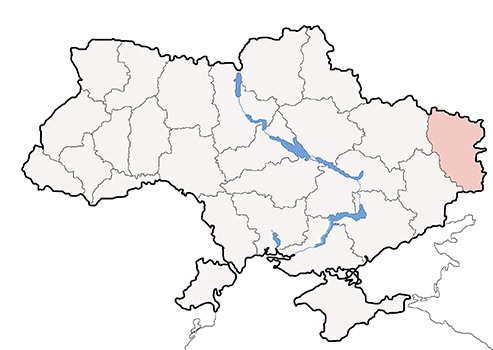 More than two months after Russian-backed separatist militias seized government buildings in the capital of Ukraine’s southeastern most province, its Kyiv-appointed governor, Iryna Veryhina, runs her administration, as best she can, from, well, a provincial city. Veryhina was thrust to the front lines of the battle between Russia and Ukraine last month, when Ukraine’s interim president dismissed Luhansk’s governor, Myhailo Bolotskykh most likely for not resisting the separatists robustly enough. Then-President Turchynov named Veryhina, a 46-year-old former journalist, to run the government of a province of 2.2 million people that is about half under the control of the pro-Russian forces.

Luhansk’s front-line position in the war has been underscored dramatically in the past week, as Russian-backed militias attacked border posts, unmarked Russian tanks and other armored vehicles drove in across the unguarded border to join the battle for Ukraine’s Donbas region, and pro-Russian forces shot down a Ukrainian military transport plane, killing 49 in the worst loss of the conflict so far for Ukraine’s armed forces.

Nearly two months ago, as the Russian-backed militias expanded their grip on the city of Luhansk, the provincial capital, Veryhina and her team had to abandon the city and set up office in Svatove, a district center in the northwestern part of the province.

“We are still doing our job. We are paying salaries, social benefits, pensions, sowing the fields,” said Veryhina in an interview with the news site Ukrainska Pravda.

Still, other parts of running a government are impossible, she has said. Some elected legislators in Luhansk, notably from the long-dominant party in the southeast, the Party of Regions of former President Viktor Yanukovych, have openly called for direct Russian intervention in support of detaching Luhansk and neighboring Donetsk province from Ukraine. Veryhina has called for their arrest, but conceded last week that all security and prosecutorial functions of her administration are now in Syatovo and cannot operate in the rebel-dominated zones.

Of Luhansk’s 18 administrative districts, half are controlled by pro-Russian militants, half by the Ukrainian authorities. The two most dangerous cities in the province are Severodonetsk and Lysychansk, both controlled by the separatists and surrounded by a perimeter of mines, says the governor. The southern city of Antracyt is a drop-off point for weapons coming into Ukraine from Russia and funneled to separatists, she says.

But the most pressing problem for Veryhina and Ukraine’s central authorities is the country’s 2,200-kilometer (1,300-mile) eastern border with Russia, some 200 kilometers (120 miles) of which are practically unmanned. Luhansk province is particularly vulnerable, as fighters from Russia can easily enter through fields and sparse forests. “It is absolutely essential that we safeguard this border and as soon as possible,” insists Veryhina.
Ukraine’s only female governor says her province is being held hostage by several “terrorist groups,” all of whom are fighting among themselves to gain the upper hand.

The day after Veryhina took over as Luhansk’s governor, the Russian-backed separatists organized a “referendum” that – while it lacked voters’ lists an election commission or election observers – drew thousands of people in Luhansk, as well as Donetsk, to show their support for a form of “self-rule” not specified in the referendum question. While Kyiv and the West described the exercise as illegitimate, separatist organizers said 96 percent of the participants had supported the referendum.

Veryhina, who has been a vocal critic of the referendum, says that those who supported the poll in May are now regretting it. “Small and medium businesses are suffering greatly. People are forced to close their business and leave Luhansk province. Hundreds of people are fleeing,” she says.

Veryhina’s administration has set up a refugee center, helping Luhansk residents leave the most dangerous areas. Still, it is difficult to monitor the number of displaced people, as many simply flee without any record.
“When Crimea was being occupied and annexed by Russia, I sympathized with the Crimeans, but this did not pierce my heart. I didn’t fully comprehend the full danger. Now that Donetsk and Luhansk are occupied, I understand this very personally and acutely. I believe that if we don’t stop them here, this plague can spread,” says Veryhina.

Born in central Ukraine, Veryhina and her family moved to Chukotka, an autonomous region in Russia’s far east, when she was a teenager. Thirteen years later, she returned to Ukraine and settled in Krasny Luch in Luhansk province.

A career in journalism propelled her into politics, first as member of parliament’s aide and later to full membership in Batkivshchyna, the party headed by Ukraine’s most famous opposition politician and former Prime Minister Yulia Tymoshenko.

Immediately upon becoming governor, Veryhina demanded that the armed separatists — or “terrorists,” as she and the Ukrainian authorities call them — stop kidnapping people, and she called on her provincial legislature to condemn the actions of the separatists. Rather than support her call, however, the assembly unsuccessfully tried to pass a no-confidence vote against her.

“I want to live in a normal democratic country and I want Luhansk to be part of a united Ukraine,” declares Veryhina. Despite the ongoing violent occupation of her province, she expresses confidence that this fundamental aspiration will come realized.