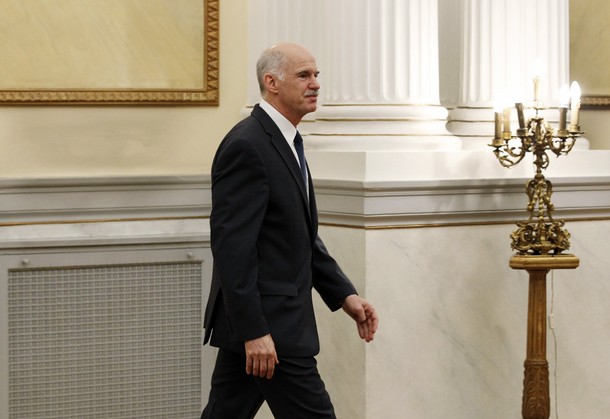 Greek Prime Minister George Papandreou has dissolved his government in the wake of 21 days of nationwide protests. The government failed to hold a parliamentary vote that was due on Wednesday morning on the agreement for a new EU deal for another loan and an extension on the payment of the current IMF and EU loans. Papandreou formed a new government, which will have to undertake a vote of confidence.. Meanwhile, EU leaders agreed that the effort to aid recovery Greece from its ongoing fiscal crisis should continue.

Greece is no longer living under normal circumstances. The situation has escalated to crisis levels such that there is no more room for endless discussions and speculation. The country needs important reforms that will put Greece back on the track of growth and development.

More than this, Greece is in need of leadership that will restore credibility and trust. Greece is no longer respected in foreign and security affairs. It is about time Greece establishes a new credible government that will address both domestic and international.

Greece’s dissolving fiscal situation is becoming a social crisis, which will lead to one of the following solutions/scenarios:

Holding swift national elections. The major concern here is that debt payments would cease during the campaign and not resume until a new government is formed but will not nevertheless get a vote of confidence.. This would not only add another shock to Greece’s already perilous financial situation but also frighten European partners and international lenders that still held out hope for rapid recovery. Driven by the belief that Greece’s leaders and society are unable to handle the crisis, Europeans may re-consider Greece’s role in the Eurozone.

Alternatively, Papandreou managed to quickly form a new and more efficient and widely party accepted government. Yet it needs to get a vote of confidence from the majority of the parliament, due Sunday It  is comprised by  a group of highly efficient and international respected members such as the former Minister of Defense Mr. Evangelos Venizelos, who has taken an active duty as both Vice-President of the Government and as Minister of Finance of Greece. The latter’s new position will surely amongst others define his future prospects within PASOK. Noticeably, Papandreou signaled the end of the old-guard and old tactics by introducing a new movement of rapprochement to its party and ultimately hoping for re-stabilization of people’s support.

Papandreou’s political future is now at a fifty-fifty situation of success or massive failure with direct negative effects. In the case of success, Papandreou will still be able to claim the vote of the middle class that has currently lost confidence in his ability to govern the country, not simply in terms of domestic policymaking but also as the representative of Greece’s foreign and security policy.

Clearly, Greece has no other solution. It can no longer be frightened to establish positive development and growth according to its interests and its allies’ interests.

A new and, to put it simply, convincing government should be established. It should move on to negotiate a new memorandum of bilateral and multilateral relations with foreign leaders and re-negotiate the status of its payment by its current lenders.

Re-draw a new foreign and security policy concept that will achieve rapprochement of relations between states, financial costs, public outreach and technology use and initiatives. This new Foreign and Security policy should be continued for years to come independently of the government in power. It should solve solutions while at the same time establishing Greece’s credibility and trust.

Greece’s foreign and security policy should become, credible, specific, and flexible. The government should reform its public policy sector in practice and become technologically innovative.

Greece should concentrate its efforts in foreign policy fields of expertise where it can make a significant contribution to the NATO alliance such as maritime security, air power, cyber-defense, medical support, and to the establishment of international educational institutions supported by international organizations on innovative research and development.

The country’s public servants, contractors and consultants should be re-educated on how to do international and national business collaboration and understanding public and international interests.

Eventually, Greece will need to restructure a program that will have an immediate timeframe applicability framework. It will be based on the exploitation of its natural resources in such a manner as to create in the long-run a new capital that will allow Greece to be in a stronger position, while at the same time in the short-term, pay off its debts and loans and re-establish its world posture.

Greece’s social restructuring entails that society and government decides on the future of its market economy. It should re-emerge as a country that is attractive and open to capital investment and development and ultimately result to national growth. The country is to become a country of practical initiatives, motives and production. It should finally enter into a new era: The era of the 21st century industrial revolution. Greece needs to join countries that are industrially powerful to pay debts and help-reconstruct foreign and security policy as it will be asked to export its goods.

Keeping in mind that US-Greek relations need also to be re-structured and re-shaped in the basis of transatlantic values, we will realize soon that this fiscal crisis that holds the tendency to spill-over into society may in fact hold the key to restore respect and honor, operational and diplomatic collaboration, as well as credibility and trust amongst the two countries. This effect will certainly be of positive nature and will expand also internationally to other states and international organizations.