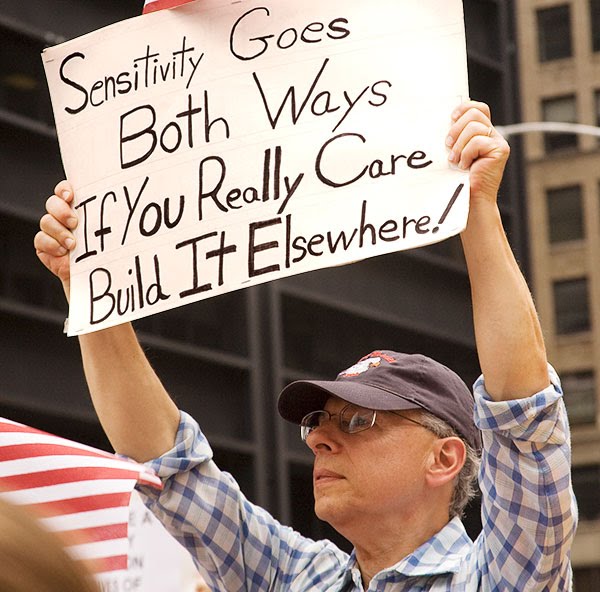 America’s usually sleepy summer has this year been riddled with debate over plans to build a mosque just two blocks from the site of New York’s World Trade Center—dubbed Ground-Zero—destroyed by terrorists on September 11, 2001.  US President Barack Obama and New York City Mayor Michael Bloomberg are promoting the mosque, but a CNN poll reveals that 70% of Americans oppose it.  The debate and its outcome are important not only for New York, but for America and the world.

Sharif El-Gamal, a New York real estate developer, and the Cordoba Initiative, an Islamic group dedicated to, according to its website, “improving Muslim-West relations,” plan to renovate a vacant Park Place property.  The $100 million project would build a 13 storey Islamic cultural center with a 500 seat auditorium, restaurant, athletic facility and a mosque for Imam Feisal Abdul Rauf, Cordoba’s executive director.

As the project wended its way through the bureaucratic labyrinth of necessary permits, opposition grew.  But the proposed site is a non-descript building last occupied by a budget department store.  There is another mosque nearby, and the area includes offices, restaurants, a gambling facility and even a strip joint.

Why the furor?  Because a mosque so close to where terrorists murdered 2,967 people raises some festering issues of Muslim-West relations.

Rather than leading the way through these issues to a compromise, Obama and Bloomberg became mosque advocates.  "As a citizen, and as president,” Obama told guests at a White House Iftar dinner, “I believe that Muslims have the same right to practice their religion as anyone else in this country.”

Abusing the Statue of Liberty as a backdrop, Bloomberg said, “To cave to popular sentiment would be to hand a victory to the terrorists.”

Both missed the point.  America is the most religiously tolerant country on earth—millions of all faiths flourish there, including millions of Muslims who worship at 2,000 mosques across the country, 100 in New York alone.  Nor should we be so stupid to believe that terrorists will suddenly change their homicidal minds because America gives yet another sign of its tolerance.

“This is a test of our commitment to American values,” intoned Bloomberg at an August 24 Iftar dinner at Gracie Mansion, official residence of New York’s mayor.

“He has it perfectly backward,” rejoined New York Post columnist Michael Goodwin.  “It’s a test, but not of America’s values.  It’s a test of Islamic values.”

People of good will must reckon with an ugly reality described by Dr. Tawfik Hamid, once member of a terrorist organization, now Chair of the Study of Islamic Radicalism at the Potomac Institute for Policy Studies in Washington.  “Allowing the erection of a Ground-Zero Mosque,” writes Hamid, “would enable Jihadists to extend their narrative of success:  ‘First our 9-11 attacks destroyed the World Trade Center, symbol of American power, and now the mosque symbolizes Islam’s rise to power within America.’”

Against that backdrop, Americans have intuitively grasped that there is something askew about a project so grand, in that particular place, with such opaque funding.

And these concerns lead to further suspicions.  Mosques have often been hijacked for nefarious purposes—the 1993 World Trade Center bombing was inspired from the Al-Salam Mosque in Jersey City.  Omar Abdel Rahman, then preaching there, is now serving a life sentence for conspiring to bomb five other strategic New York locations.

The Jersey City mosque was in close contact with Milan’s Viale Eduardo Jenner Mosque, which Italian authorities are trying to close, its former imam jailed for plotting suicide bombings and recruiting volunteers for jihadist training in Afghanistan.  And a few weeks ago, Hamburg authorities shuttered the Taiba Mosque “because it was a recruiting and meeting point of Islamic radicals who wanted to participate in so-called jihad.”

How individual Muslims react to such information is a cogent test of Islamic values.  But Rauf, prospective imam of the new mosque, told an Australian audience in 2005, “We tend to forget in the West that the United States has more Muslim blood on its hands than al Qaeda has on its hands of innocent non-Muslims.”

This is ugly stuff; beyond the pale of political correctness that stifles contemporary western discourse.  Nonetheless, it is a reality that anyone who invokes American, western notions of religious tolerance must face.

Globalization, including unprecedented migration, has brought the Judeo-Christian west face-to-face with Islam.  We know Islam’s ugly face.  But we also know its decent, neighborly face, the face of the family that runs the corner market in a small New Jersey town, the face of the vast majority of Muslims in America and throughout the world.  It is vital that we not confuse these two faces, and plain talk about the new mosque would be a good beginning.